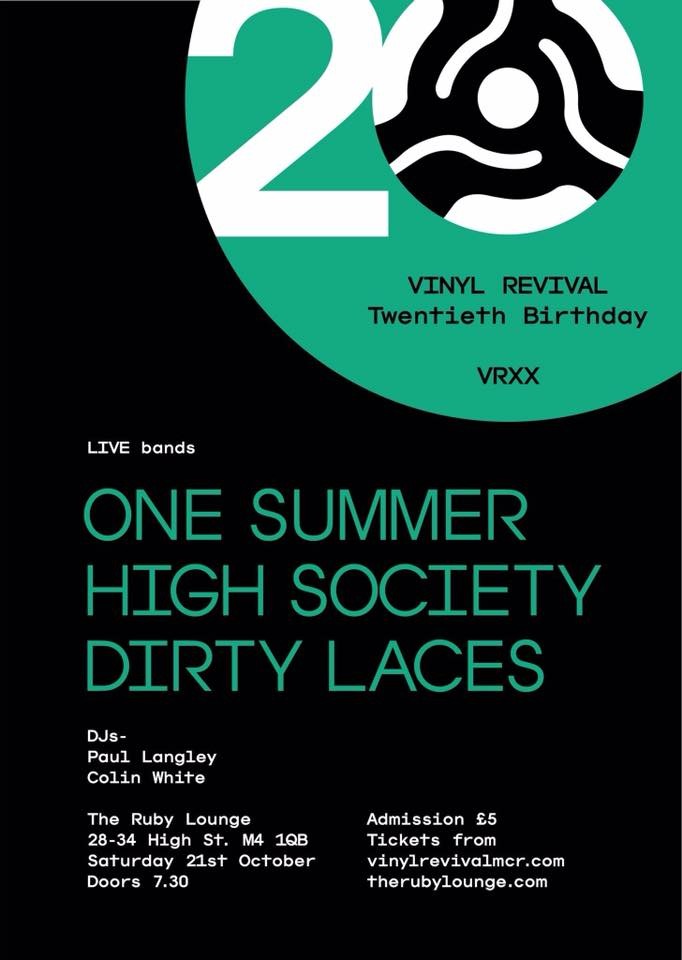 After trading successfully for the past 20 years Colin White’s Vinyl Revival Manchester Store is holding a celebratory gig at Manchester’s iconic Ruby Lounge venue in October 2017! 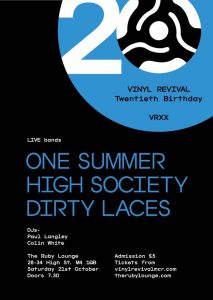 Vinyl Revival have been a mainstay in Manchester for the past 20 years, selling a bevvy of Vinyl along with archive posters plus famously being involved with recent major promotional events for The Stone Roses and The Charlatans. 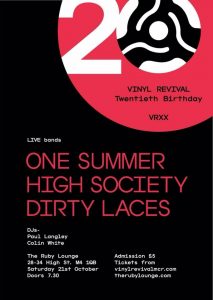 Colin has brought together a wealth of local and legendary talent for the night at the Ruby Lounge on Saturday 21st October and all for a remarkable price of £5!! 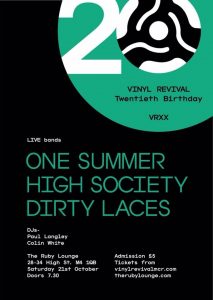 Mark Radcliffe’s sidekick Paul Langley will be clicking play on his iPod in his DJ set before Manchester rock n roll 5 piece Dirty Laces kick off proceedings with their brash raw guitar-led indie rock. Then Colin White’s very own High Society take to the stage in a rare outing to perform their mellowed out guitar summer vibes.

The headline act for the night are Manchester supergroup, the criminally underrated One Summer. Formed after the break up of The High (featuring Andy Couzens of The Stone Roses), One Summer on their recorded material alone deserved a major record deal, one which never came due to the band and management having the time of their lives living on the road and purely having fun playing to their devoted crowds, but out of the blue after 20 odd years they had a 3 track 12” release on Record Store Day release, with stunning artwork by famed Hacienda artist Trevor Johnson. 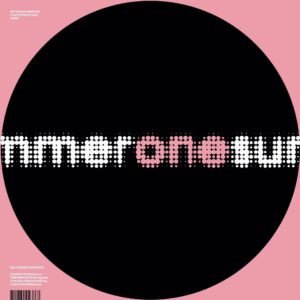 One Summer are John Matthews (vocals, Turning Blue, The High), Carl Wolstenholme (bass, The Rainkings, Turning Blue), Stephen Fitzpatrick (guitar/backing vox, The Seaside) and Chris Goodwin (drums, The Waterfront, Inspiral Carpets, The Mill, The Buzzcocks FOC, The High, Electronic). Even though this will be their first gig in over 20 years we are promised fireworks and a set not to miss!

You can buy tickets for the event from Vinyl Revival and Ruby Lounge websites.