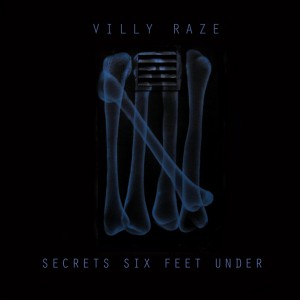 ‘Secrets Six Feet Under’ marks a departure from the usual punk we love from the talented Mr Raze. Not that his new album is a disappointment. The feel is more 1920’s Speak Easy, at times giving the tracks an instant elegance. The theme running through some of the songs is suggested by the title, the lyrics giving a glimpse into the lives of the lost and dissolute and the sadder side of life.

‘Double Death’, a searing indictment of the church, has an ascending slide guitar introduction which helps to nail the prohibition feel of the piece from the outset. Villy Raze injects bite and authenticity into his lyrical delivery, both on this track and throughout the entirety of ‘Secrets Six Feet Under’. The understated retro-cool of the backing is simple but effective, perfect for delivering music with a message. The next track has far more Rock about it, the energy raised several notches from the opener. The music is drum-driven and has some interesting guitar licks, but the main event continues to be Villy’s vocals. ‘Secrecy’ is more Rock than Punk, another surprise from a singer associated more with the latter than the former.

The Afro-Caribbean feel to the music of ‘The Morgue’ backs some spoken-word content giving a view of those people who have lost their way on the road through life, whilst ‘Victim’ begins with a ‘Chelsea Dagger’- type chant that repeats throughout the track. The song also has a whiff of the 1920s cool of ‘Double Death’, but with more of a gutsy feel and memorable chorus. One of the best tracks on the album.

The laid back charm continues the retro trend with ‘Coffee Shop Girl’, with a pre-war Berlin vibe. Again, the mood is cool and the vocals heartfelt. Along with the rest of the album, there is an easy professionalism to the delivery and the production. ‘You Don’t Have to Go’, a ballad with hints of Rock, is another vocal masterpiece. The lyrics explore the feelings of those left behind when a soldier goes to fight and the reasons they do, making the song both sad and contentious.

There is a World Music feel on ‘Throw it All Away’, a classic examination of the dissolution of a relationship. The track has a repetitive chorus that re-enforces the message of the song and makes the tune memorable and catchy. The Indie-Punk of ‘Bedroom Walls’ raises the tempo with gusto and bravado, making a change after the previous ballads. The whole track barrels along; a strong and exciting offering. The acoustics of the last song on the album, ‘Infinity’, have a soft simplicity and an African rhythm. The lyrics are open and honest, an uplifting finale.

As a whole, Villy Raze has produced an interesting album. Some of the tracks, such as ‘Double Death’, ‘Victim’, ‘Coffee Shop girl’ and ‘Bedroom Walls’ are outstanding. The whole album is well produced and focuses on Villy’s excellent lyrical deliveryl. My least favourite tracks were ‘The Morgue’ and ‘Secrecy’, which were slightly weaker than the other tracks, but on the whole the entire album is something to be be proud of.

Secrets Six Feet Under is available at: