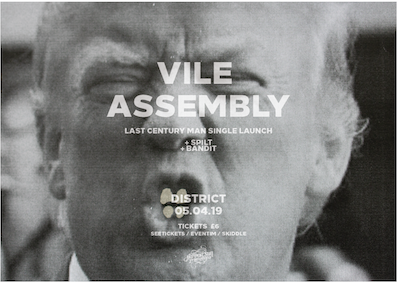 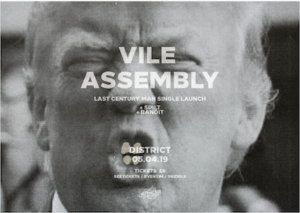 Liverpool’s Vile Assembly launch their storming new single ‘Last Century Man’ on Friday April 5th at District in Liverpool’s Baltic Triangle. The band, who first came to our attention when they toured with The Damned last year, see ‘Last Century Man’ as a ferocious rallying cry against careerist politicians and corporate culture, and there’s no doubt about their commitment to the cause, the accompanying video has sparked debates, death threats and probably put the band on the CIA’s radar. This is art at its most vocal and provocative:

The single and highly controversial video take an uncompromising aim at politics, religion and the establishment through raw and infectious Punk Rock, it’s Vile Assembly at their most vitriolic, but their artistic and musical talents are always at the forefront. ‘Last Century Man’ is infectiously melodic with huge guitars and a great hook underpinning Paul Mason’s stirring vocals which sit somewhere between Jello Biafra and Johnny Rotten.

Contemplating the influences behind his songwriting, vocalist Paul says “How the elite have treated the working people is criminal! They’re the Last Century Men, it’s time to call them what they really are, they are the true Vile Assembly” and of the band’s impact on social media where they’re currently causing mayhem, Paul says “We write songs about a world that’s turning to shit, and through those songs we try to stand up for what we believe in, even though we know we might not be popular for it. Change begins with yourself, by being authentic and true to who you are and what you believe in.  For Vile Assembly that’s the purpose of music, and if people want to call that Punk, then we are Punk, come share a moment with us, a different world is possible!”