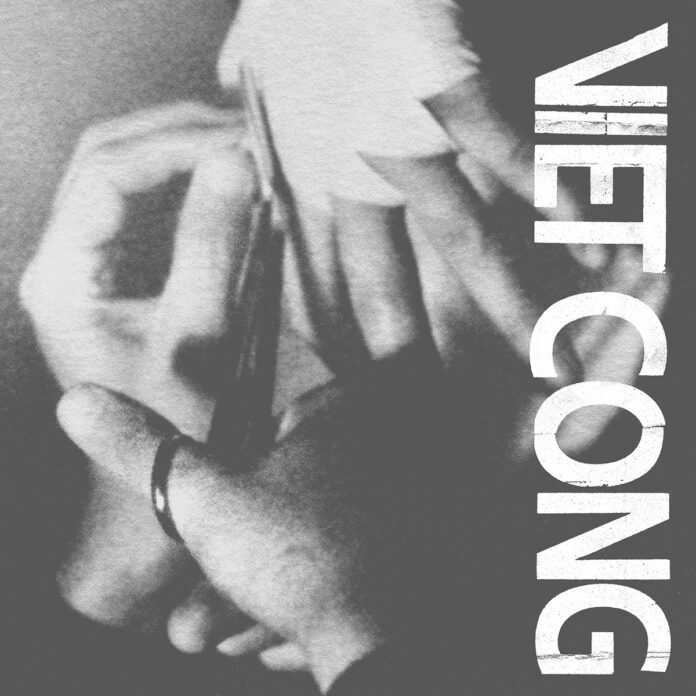 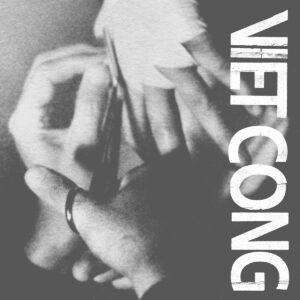 Viet Cong’s experiment with post-punk on their self-titled release yields successful results. It sounds like a substantial storm brewing, the depths of the sea churning, like the end of the world as we know it (and even culminates in a track called Death). We don’t mind though as listening to this release on repeat seems like a fine enough way to go.

The album would make a suitable soundtrack to trudging through the depths of a Canadian winter that won’t end (the band are from Calgary, Alberta after all) or in general facing life’s daily struggles, minute to monumental, while pondering the meaning of it all. One thing is certain, we are pleased enough to be alive if it means encountering a release as interesting as this. The first of its kind to be released this year so far.

Three songs in particular have an opioid effect – consuming, calming and addictive. This includes lyrical interest. Simple, abstract and perplexing, they express philosophical thought with emotional conviction. They’re well-suited for the music, or vice versa . The first line of Continental Shelf may not seem striking in print – “When all is said and done. You’ll be around until you’re gone” – but it resonates perfectly with the trembling, mournful guitar over the doom and gloom static and bass line. You believe the anguish in lines like “don’t want to face the world, it’s suffocating, suffocating,” and “undesirable circumstances, I can feel them, I can feel them.” The frustration of the effects anxiety has wrought comes through in “don’t want to reminisce, I can’t remember, can’t remember.”

This haunting song has a deep, dark soul. Showcasing the band’s penchant for quivering, angular guitar, and that rolling, grumbling thunder effect, (that permeates the whole release, but never grows tiresome) punctuated by the relief of those storm clouds parting for the neatly contained chorus, “on the horizon, the sky light falling in.”

Silhouettes comes in with a bit of a vintage Bloc Party feel, scissoring guitars clashing against a danceable bassline. Early Wolf Parade and Interpol come to mind, but they seem comparatively superficial and less severe when compared to the oceanic depths of this song. Elements dart, crash and overflow. The super bass may be the backbone of this track, but the true effect is delivered through the varied phases of the track. Erratic, twitchy math rock meets sensuous vocals, fluid watery bridges and patient drumming.

Pointless Experience starts like a more electronic version of earlier, mathy Foals. The rougher, looser indie quality to the recording imbues it with authenticity, making it feel like an 80s release, that is, until juxtaposed with the track’s key defining feature – the mechanistic full wave of MRI-esque electronic sound that goes from left to right channel, then cuts out abruptly to make room for the bare bones verses. This cutting in and out throughout the track is handled masterfully, resisting over-exploiting it and timing it perfectly makes for maximum impact.

The rest of the release is not to be discounted either. The teetering jerkiness of Bunker Busker and the long journey Death also exhibit unique songwriting skills. Newspaper Spoons spins the thunder effect into a tribal rhythm. The hypnotic, odd peacefulness of the typywriter-tone effect on March Of Progress is at odds with abstract lyrics about wounds, infection and nausea (a good example of how the release often sits comfortably yet unsettling, steadily unstable) then shifts gears entirely, bursting into radiant plucked strings.

While numerous bands are toying with darker post-punk these days, the key is to do so in a manner that acknowledges that modern musicians have decades of all sorts of developments in musical tendencies at their disposal. Viet Cong do just that – delivering a memorable and atmospherically satisfying release, utilizing an avant garde approach to sound and song structure in conjunction with an appreciation for the past (post-punk like Joy Division and Echo And The Bunnymen and math rock and shoegaze tendencies).