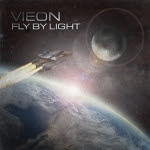 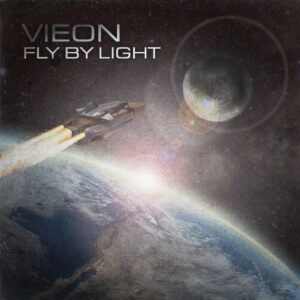 Electronic duo ‘Vieon’ serve up ‘Fly By Light’ to take us into 2016 – music prepared to power through the silence and offer us an accompaniment to exploration. Louder Than War’s Emily Oldfield reviews.

Their 80’s electronica influence is certainly not outdated, but stepped-up through brilliant synth-work in a celebration of modernity. It seems fitting to a year where man’s travels to the International Space Station has already made mainstream news, ponderings on the unknown and even discussions on the silence of space becoming a big issue. Well, Vieon’s sound seems to provide a solution – from the blast-off of ‘Days of Fear & Wonder’ to the bubbling beats of ‘Transmission’. The two men behind the sound, Matt Wild and Josh Green, take technology and use it to fill space (in both senses), with the most immersive music which is big-tipped for the coming year. It speaks of opportunity rather than obscurity, and allows us to consider the ‘new worlds’ we encounter in our personal lives, as well as wider human travel.

After all, Vieon certainly know how to take sound and instrument to new heights; gaining recognition as Coventry-based synth pioneers who already pushed boundaries with their much-acclaimed 2014 album ‘The Sound of the Future’. But how do you follow on from sounds of the future? By pulling us into what could be very exciting concepts of the present – and dealing with what is contemporary, current, certainly takes guts.

“Space is closer than we think”

‘Fly By Light’; could be considered a concept-album of space travel which is closer to reality than we may first think – taking us into journeys at our fingertips; intimacy and love. For example, the opening track ‘Days of Fear & Wonder’ provides a beautifully phased progression  from falling footsteps and fleeting birdsong into the surging sound of technological take-off. Is space travel really so close? Silence. Then – pow. A stunning wash of synths have an almost anthemic quality, topped by toe-tapping drumbeats; powering us into the album in an experience which seems to allude to the excitement of new encounters. ‘Fly By Light’ opens on a high, along with spacey-vocals which somehow manage to tell us of intimacy too -‘We’ll fly by light together’.

This is a concept album which draws on the universality of man’s journey into new spaces; in what appears to be an exploration of a new relationship, paralleled with a trip into new orbits – both have the opportunity to take us out of this world. Hence, space is closer than we think and seems an appropriately-used metaphor here. Giving the album a few listens, it follows the high-flying feeling of new love and opportunity, as well as the darkness and distances which come as part. A soundscape which is carefully crafted by Wild, with his striking synth-work and programming, is further layered by Green’s diverse keyboard skill – and it’s this constructive unity which can take us on a journey.

Like rockets open up new routes, layered synths create a sound which is ever-changing, reflecting not only the advancement of man, but the course of our emotions. Take ‘Proteus’ for instance. It’s an instrumental track always coming back to the same underlying sound playing with pitch, the synths growing increasingly ecstatic. Imagine yourself on a wave of feeling, getting more and more into the moment – like the early stages of a new relationship, or, very appropriate right now, a New Year. ‘Proteus’ is after all the ascribed god of ‘sea change’ and this track presents and considers change head-on, both emotively and illustrated – through Green and Wild’s technical flourishes. This makes me think of electronic artists from the past like Kraftwerk, musicians who used emotive electronic music to reflect upon the technologies of their day too, such as roads and motorways (with ‘Autobahn’ being an obvious example). Clearly, going forwards with music provides us with an enhanced opportunity to reflect on our development; one of the therapeutic qualities of Vieon’s album. These are the emotive features of modern music at their most striking.

“Looking at the exciting unknown in our own lives”

It’s not all complete change though – the beginning of the track ‘Meteor’ holds a start-up of synths quite similar to ‘Days of Fear & Wonder’. This may seem repetitive to some, but when the work is appreciated as a concept album – it is an important technique, solidly shaping a soundscape which we can consider alongside our emotional landscape. It also allows the audience to empathise more readily and consider a trip through outer space in parallel to a trip through personal space; a return to the prospect of a romantic relationship I mentioned earlier.

There is a noticeable similarity in sound again between ‘Fly by Night’ and ‘Transmission’, especially in terms of the spacey-vocals and sentimental tone regarding relationships. The repetition of the foreboding lyrics ‘I know we’ll meet again at the brightest burning star’, in ‘Transmission’ suggests a breakdown of relationship over the course of the album, yet ‘ meet again’ and the superlative ‘brightest’ suggests a positive prospect of rekindling on the future. So a sound which is suggestive of exploring the exciting unknown in space, can be just as appropriate to looking at the exciting unknown in our own lives; like relationships. It reminds me of the tentative, yet toe-tapping electronica of the early 80’s; such as French-duo ‘Space’, with tracks like ‘Magic Fly’. There’s a theme here which we can apply just as much to relationships as we can to music; we can’t help being enchanted by the enigmatic.

In love and life, enigma and the unknown is everywhere – it is facing it which is thrilling, as well as… difficult. The enthralling instrumental piece ‘Extant’ is a key point in the album where the overall mood changes, becoming more sombre; suggesting hardship. The lingering noise of a lift shaft on opening is a little Joy Division-esque yet avoids duplication; as here shows us the sound of man’s conventional ability to lift himself – no fancy rockets this time. It made me think of romantic relationships too; the typical domestic level at which they exist – whilst the early stages have a heightened ecstasy.

Yet throughout the songs, the wonders of orbit are never far away; even in ‘Extant’ itself the spacey synths and 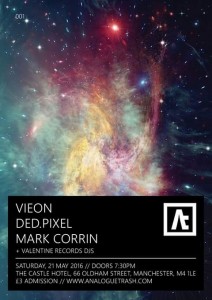 rolling rhythms are quick to return… just as there’s always hope in the relationships we have! It’s about seeing opportunity rather than obstacles and ‘Extant’ (appropriately meaning ‘still surviving’) is a track built through gradual electronic layering, highlighting a capacity for continuation, which deserves to celebrated. Expect looping drums, keyboards, buzzing synthesisers – and all topped-off with a great guitar solo. We go from darkness to light in the space of a single track, showcasing the duo’s ability to express a variety of journeys through sound. It’s no wonder that Vieon are known for being a treat live (complete with keytar!)– with a number of sold-out performances in 2015 further tipping them as an immersive electronic act to watch out for in 2016. Already some dates for this year have been announced, including an AnalogueTrash hosted evening on 21st May at The Castle Hotel, Manchester. It’s set to be an immersive intimate show; featuring Vieon along with ded.pixel, Mark Corrin and Valentine Records DJ’s. A blend of Manchester labels, lively musicians and intense electronica is sure to be a hit. Green is also recognized for his stunning visual effects, making Vieon not just an act, but artists you are sure to remember.

“Spiralling trips of teen fascination, the intensity of new love”

Alhough the second half of ‘Fly By Light’ offers a change in mood then, it certainly does not detract from quality or message. Even in the unknown we unlock new opportunities – a big theme in the album – just like the experiences we have in love we can learn from, even if they don’t last. This album made me think through spiralling trips of teen fascination; the intensity of new love, its ecstatic heights, followed by a spectacular crash. ‘Rise’ is a stunningly short closing track in which follows this perfectly, synths reaching a precarious level, vocals deepened and distorted. Something does indeed become clear on listening to the whole album through; it is a route to appreciating man’s own ability to reach new heights through love. This could be the love of a romantic relationship, as is suggested by the vocals, or the love of relating to music – delivering the message: things do go wrong, break down, but it’s all valuable insight. Electronica meets human experience, space exploration meets self-exploration. It’s a trip you certainly won’t regret taking and invites you to look back on episodes of life with appreciation, rather than regret. Powerful music opening up new mind space.

For more information about Vieon, you can join them on Facebook. You can listen to their music on Soundcloud and browse their output on the AnalogueTrash label website.