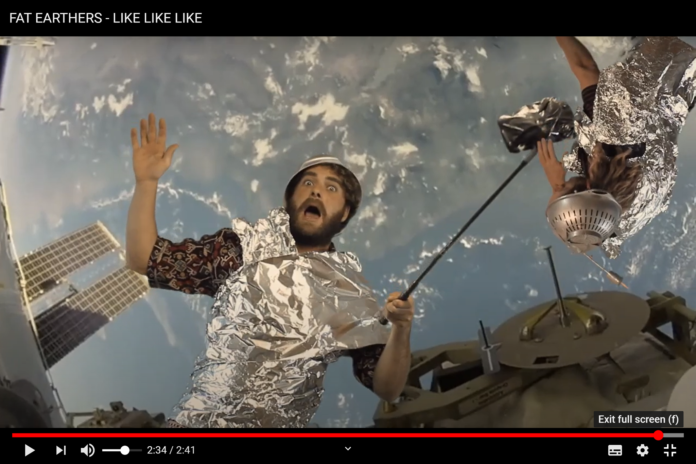 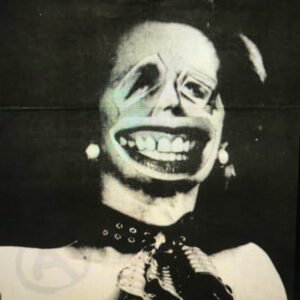 Two years ago I first wrote about manic Isle of Wight duo Fat Earthers.  “A primal racket that sounds like an early Sub-Pop band playing Spiral Scratch on shit-loads of drugs” I said. They seem to have calmed-down a bit, but even on this catchy new wonk pop song, you can tell that evil lurks beneath the surface.

Fat Earthers are the conspiracy-nuts it’s OK to like!  They wear their tin-foils hats and metal colanders proudly(and ironically) in their videos and don’t take the shit seriously – they just come from the Isle of Wight, home to King Loon David Icke, so it must rub-off.

The band is a must-see live; turning calm and contemplative audiences to adrenaline-fuelled mosh pits within a blink of an eye.

For a band who thrive on the sweat, blood and mayhem at their live shows times must be very hard indeed.  So it’s nice to see them getting creative with a green screen and loads of backgrounds whilst they arse about in the video for a brand new track: Like Like Like….  yeah, they’re mocking social-media zombies.  That means YOU reading this on yer why-I-phone you fer-eak!

They’re like a post-apocalyptic Wham! aint they?   Which one do you fancy?

It’s almost as if there’s a Sleaford Mods influence on the most guitar-mangling of bands. And a Krautrock Motorhead vibe as well as a hint of Nag Nag Nag! Whatever, they’re just great.

Fat Earthers can do no wrong though in my eyes – of all the two-piece bands around, they are the most unpredictable, inventive and volatile.  And that have a dark, fucked up sense of humour… Here is their previous video.

Yep, another song about..

From day one the band have been completely DIY in their approach to music. The first two EPs were self-funded, self-recorded and self-released on Kyle’s Prison Records label, the merch was handstitched by Luke and sold out of a suitcase on the road, and the video for the latest single Like Like Like’ is the latest example of their do-it-yourself ethos.

Luke moves like hurricane when it comes to song-writing; chords, riffs and lyrics lurch and lunge like a heaven-sent deluge. Kyle is the lynchpin, harnessing the energy and creativity within the eye of the storm and concentrates this into punchy 2 to 3 minute cruise missiles targeting right-wing politics, misogyny, trolls, Karens and all that is angst-inducing in 21st Century Britain!

With two EPs under their belt the boys took advantage of the lockdown to write and record their aptly-titled debut album ‘Bored’.  The first second Single to be released from the album ‘Like Like Like’ is an ironic look at modern life in the social media age.

Great Interview with the band at Verge Magazine
Previously on LTW