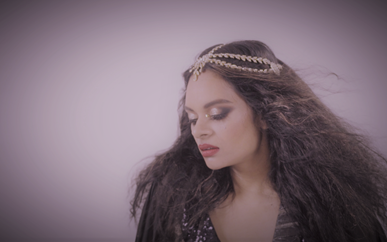 Born in Trinidad of South Asian descent, her guitar-wielding persona is equal parts exotic Goddess and entrancing vampire: a tidal wave of punk rock sensibility; Grace Jones-esque magnetism, topped off with an Eartha Kitt-like purr. The theme of the track and video is all about celebrating the divine feminine present in all of us, specifically addressing femme phobia. Ms Mohammed explains the themes of Pandora:

“We are sold limiting ideas of what it means to be female. The feminine is still derided in all cultures, still frowned upon, still synonymous with weakness. Truly celebrating the feminine would bring about the revolution that is so desperately needed. The Future is Femme!”

Ms Mohammed founded the Clit Rock movement in 2013 as a way of speaking out against female genital mutilation. As a champion of cross-cultural tolerance and an out queer artist who advocates for LGBT rights and visibility, Ms Mohammed is challenging prejudice through her music – the melting pot of paradoxes she uses both through her songs and as an artist demonstrate that the ignorance employed by many in a post-Brexit Britain can be exposed and dismissed through her art.

Louder Than War are delighted to be able to Premiere the video for the new single Pandora which features appearances by percussionists Cara Sebastian and Zel, dancers Tayce Szura Radix and Cara Melle and, Kat Five from Feral Five amonst others.