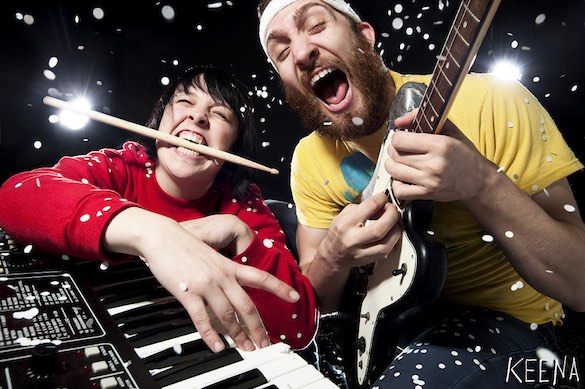 Earlier this year Math the Band dropped a cracking album, Stupid and Weird, which we gave a well deserved 8 / 10. They’ve just released a video for the title track off that album which we’re stoked to be able to premiere for you today –  check it out, in all it’s bonkers wonderfulness, below.

Here’s this from our review of the album, written by Adrian Bloxham

“It’s like all your favourite punk bands have been thrown into a room and made to fight it out with xylophones and sega machines, it’s like Hawkwind and Motorhead have been made to wear dayglo and tutus.”

Self dubbed “electro-punk spazz duo” Math The Band are from Providence, R.I. They use a combination of analog synthesizers, vintage drum machines, old video game systems and “shitty” guitars to make the fastest, loudest, weirdest music they can. And they do it very well. You’d be pretty hard pushed to find any other band like Math The Band which, frankly, is one of the reasons we love them so much. Their music is also ridiculously catchy and decidedly “party” – two more reasons why we love them. They’ve been around for over ten years now and in that time they’ve toured with bands like Andrew W.K (like I said, they’re a “party” band), Japanther and Wheatus amongst others.

The video for “Stupid and Weird” has been made by CrashBoomBang Productions. It sums the band up perfectly, being about as bonkers as their music.

You can pick the album up on vinyl at anchorbrain.com. If digital’s more your thing head over to maththeband.com.

Math the Band also have a handful of dates lined up for the next few days – check em out below Stupid and Weird the video: