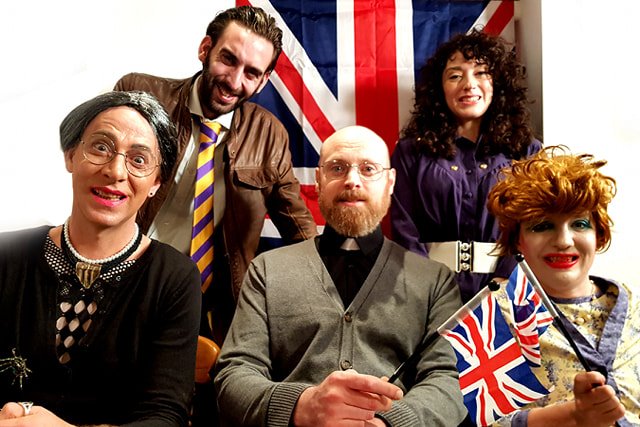 We are all just creatures and our time is finite, in a world that is consistently faking the only truth we have is ourselves

Louder Than War Online is proud to present the world premiere of the video ‘Black Rain’ – centrepiece of the album ‘Oh Really, What’s That Then?’ by Jemma Freeman and the Cosmic Something. (Review and Interview). Co-produced by the band and Black Triangle Films (Who are of course the people behind Anarchistwood – their surreal visuals being their calling card.)

It’s a strange, bewildering and wonderful piece of film-making which to me, has the feel of a modern Joe Orton or a psychedelic Abigails Party.  What ‘the kids’ will make of it who-knows?

I asked Freeman about the the video, which could be seen as mocking heteronormative life maybe?

I was born in the 80’s a time of cut backs, riots and a form of aggressive conservatism that meant when something as cruel as a law preventing children from getting access or being taught about homosexuality in a positive and proactive way was introduced it was heralded as “a return to common sense”.

Amongst all the other social pressures, difficult home life, and general confusion that I felt as a 12 year old trying to fit in, Section 28 was the final dampener on me being open and healthy about my sexuality. Being actively denied advice or signposting by the only adult I thought I could trust at the time; my form teacher, sealed the lid on what I then felt was confirmed to be deviant, problematic, and possibly illegal.

So I shut up. I closed down. I found a place to store that part of myself and presumed for years that I was broken, a bad female, a faulty girlfriend, an errant wife. I denied myself, was uncertain, I had low self esteem, I didn’t think I was good enough, and because I was trying to conform to a femme stereotype that just was not me I also found myself lacking, failing, unattractive. I was very naive, the low opinion I had of myself meant I was trusting, oblivious and grateful of any attention. I found it easier to talk to men (possibly to do with being Neuro diverse) and I was, I see in retrospect an easy target to a particular type of subtle abuse. I could be trained, diminished, told I was wrong, criticised and I would bend and try and change because I was terrified of being alone, and certain I was lucky to have anyone. My friends were cut out one by one as they threatened to unmask the truth of my captor, I became isolated and almost disappeared.

I wasted years of my life trying to conform, attempting to see what I could never quite get, trying to understand my gender, attempting to play a role I could never be successful at. Somehow I always felt safe because I knew that hidden at the back of my mind I had stored my true self. Like one of the BFGs dreams in a jar my gender and sexuality thrived colourfully, protected in secret places. Emerging when it was safe and culminating in a real life experience that undid all of the years of abuse. That tiny spark of truth set free by accident, took hold and lit me up from inside in a way that could no longer be hidden. 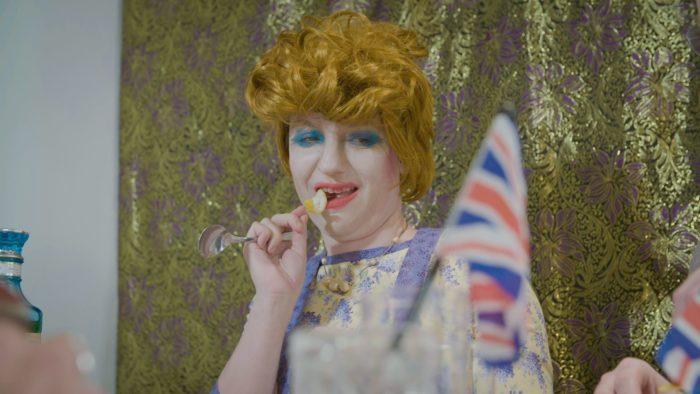 The video is deliberately furious, Rosie is a vengeful angel. She overthrows not only her oppressor but all the tawdry double standards that come from denying basic humanity in favour of an ethos that will never even benefit the majority of its supporters. It’s anti Brexit and anti Tory not anti man or anti heteronormativity. It’s a struggle against an invisible regime, coercion and gaslighting on a local and national scale. The mother in law is a satirical Trump/Thatcher nightmare, the father in law constricted by his own piousness. Its awkward, claustrophobic, no-one is being honest. It’s obsessed with false formality, saccharine ceremony. The food is ostentatious and insipid, there is no nutritious value to be found in anything.

When she is saved by a benevolent, magical force, I feel she is just realising her own energetic potential, I love how she saves herself, as we all should and becomes this glamorous, powerful life-force capable of transforming her biggest monster into a stumbling pile of moss. We are all just creatures and our time is finite, in a world that is consistently faking the only truth we have is ourselves.

It was a lot of fun to make I imagine…

Rosie who plays the protagonist is such a good actor. and Dan Booroff ( the’ husband’) was in the movie The Death of Stalin. My favourite though is our benevolent woodland sprite character, it’s Jason our second drummer, who is actually a benevolent wood sprite in-real-life.  Bassist Mark is disturbingly convincing as a vicar too!

I made all the food including the mashed potato salmon and kiwi jelly with pickled onions, and we actually ate it!  It really was truly disgusting!

‘Oh Really, What’s That Then?’ by Jemma Freeman and the Cosmic Something is still available on Trapped Animal Records