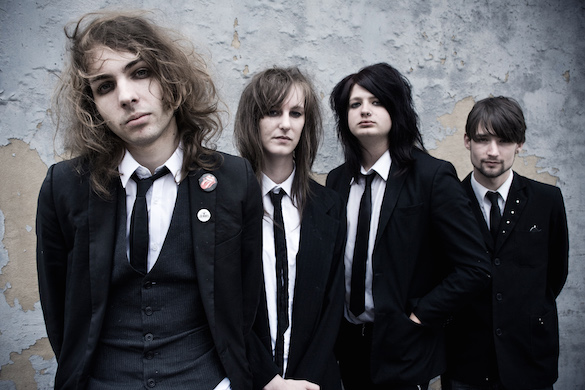 Back in November 2013 we introduced you to the rousing Immingham band Ming City Rockers, a band we’re convinced are going to go places with their classic, potentially timeless songs all of which are “searing little belter(s) of bluesy-punk mayhem…” (© Louder Than War scribe Andy Barding). The band have since been busy working on a soon to be released, self-titled debut album that we at Louder Than War are especially excited about. The first single off it, Get Outta Your Head, is due out on 8th September and Louder Than War have the honour of premiering its associated video – check it, along with more info about the album and the band, below.

We also reviewed the band’s second single, Twist It, earlier in the year from which we’re lifting this quote:

“Twist It is one hundred and thirty seconds of driving rhythm, scuzzy guitar breaks and vocals which contrive to be both insinuatingly leery, slightly vulnerable and a bit petulant. Together it all adds up to a great little piece of proper old fashioned dirty rock and roll that recalls the heady days of early punk as well as sounding completely modern.”

Huw Stephens (off of the radio) is also a big Ming City Rockers fan, asserting that they’re “…the best rock ‘n’ roll band ever to come out of Immingham”. He’s also said a lot more about them, most of it even more flattering than that can you believe!

You should be convinced of Ming City Rockers worth by now but I’ll carry on anyway.

More that we know about the band includes that they listen to Stooges, Eddie Cochran, Gene Vincent “…and nothing else.” We also know they’ve played some great support slots, such as for Peter and the Test Tube Babies (our review) and Palma Violets (who they toured with, winning new fans everywhere they played according to logic and the ineffable power of rock ‘n’ roll which usually sees to it that “good shit always rises to the top.”)

All reports from people who’ve seen the band live suggest that you can’t not see Ming City Rockers play and not have the hairs on the back of your neck rise as you realise you’re stood witnessing the early days of a band destined to end up playing stadiums. And if not stadiums, at least places considerably bigger than they’re used to now. As idp inferred when he wrote about them, Ming City Rockers are a caps lock band; you need to shout about them. After checking out the single below (and if you haven’t already, WTF guys – get your priorities right, stop reading, press play on the video below then come back and carry on reading – we’s aint going nowhere…) we’re pretty sure you’ll agree.

Lets calm down with a bit of spiel culled off the press release pertinent to the album:

“The single is a taster of what’s to come from the band’s self-titled debut album, which will be released on September 15th. Recorded at a thousand miles an hour in just one week, it’s 11 tracks of full-throttle gang-chant rock ’n’ roll built on romantic frustration, hedonistic alcohol abuse, outsider small-town anger and broad-sweeping animosity towards the human race in general. Clocking in at under 30 minutes, it’s an album infused with the spirit of MC5, Link Wray and the delta blues, brimming with wit, desperation, defiance and bite and wrestling under the yoke of many masters: booze and narcotics, long-gone lovers and working-class nihilism. “

The self-titled debut album will be released on 15th September through Mad Money Records, distributed by Republic Of Music. It will be available on CD, digital download and a double gatefold 7” single set.

Ming City Rockers have two gigs lined up at the moment with more to follow. They are: