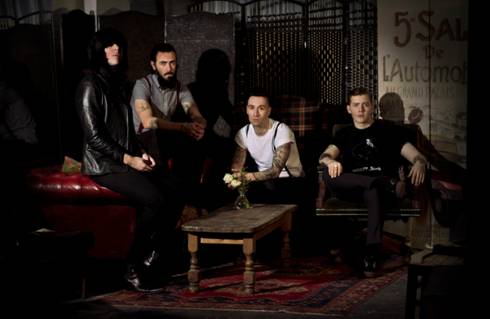 Despite having a sound that borrows obviously from genres such as rockabilly, punk, garage, glam and good old fashioned rock and roll, Dedwardians are definitely not a conveyor belt band; rather, they’re a band with their own clearly defined personality and one which we think marks them out as being destined for great things. So, fresh from taking Nightmare Festival by storm last weekend, it gives us an inordinate amount of pleasure to premiere the band’s latest video for you – Love Sick – a proper yowling beast of a track.

Love Sick is Dedwardians new single, due out on Nov 24th and as the press release promises, it’s “…more of their twisted rockabilly-goes-glam, surf rock stompers.”

The single is a double A sider, with the second track being “Like An Animal”. The two tracks help “explore the darker side of the band’s sound” by showcasing a “richer, more organic production with harder beats and heavier fuzz guitar.”

Forming in London off the back of their combined interested in both 50s rock ‘n’ roll and low-fi garage punk, Dedwardians have been taking the city’s live music circuit by storm with their powerful, over-driven sound and energetic  live shows. Not afraid of the anthemic chorus, they’re breathing life into a genre long in need of some new blood.

Their previous single, ‘Bang Bang Die/Stop Destroy’, won them a solid fanbase and ‘Best New Band / New Breed’ at the Pure Rawk Awards, and after stepping back into the studio with mastermind Andy Brook at the infamous Arsis Studio, it’s clear they’ve upped their game. This is a band passionate about their recordings, keen to find the perfect balance between the hard-hitting punk aesthetic and crooning purr of their swing rock idols.

The video was shot at The Apollo Studios in Hackney, by Ben Auston – the band’s bass player. Being that the whole room looked a bit like a padded cell, they kept the vibe and used it as inspiration in the a most DIY way.