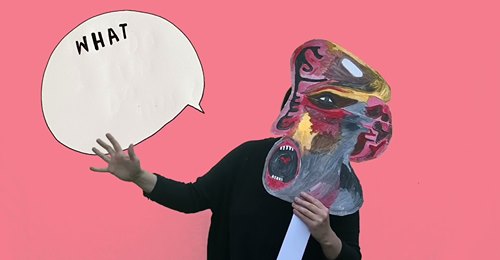 Bryony Hegarty reviewed their livestream from Gallery 46 back in March and the latest album from Band of Holy Joy, Dreams Take Flight was released last week on Tiny Global Productions.  Taken from it is This Rhythm of Life…

What I like about Tiny Global is that it’s family of bands all take an interest in each others work – and collaborate and help-out wherever and whenever possible.

Vic Godard sang with the Nightingales and Jon Langford did their art-work on Commercial Suicide Man. And now Stuart Moxham had produced Band Of Holy Joys album and Nightingale Fliss Kitson has made a film for the video using her art / collages.  This is the way it should be artists united not in competition.

And it’s a beautifully strange video for a strange and wonderful song.  Johny Brown says of it:

a brilliant piece of collage work by Fliss Kitson that captures the essence of a song that is ostensibly about protest against injustice and change for what is stuck and wrong but also about just trying to be yourself in the city, having the courage to show some face and find some space and a good place amidst the hourly onslaught of commodity consumerist conformity. It’s a lovely piece of work more so for placing the main protagonist deep in the bowels of the Tyne Tunnel, working his way towards some kind of light and freedom.

Whilst the whole song is magnificent with Johnys vocal taking quivering flight (I always think of him as the Morrisey who will never let us down) I particularly like the central spoken section.

Who can resist a song which starts with the words: This is a city I hate, but by it’s close, ends with the opposite: This is the city we love.

That is why they are called Band of Holy Joy….