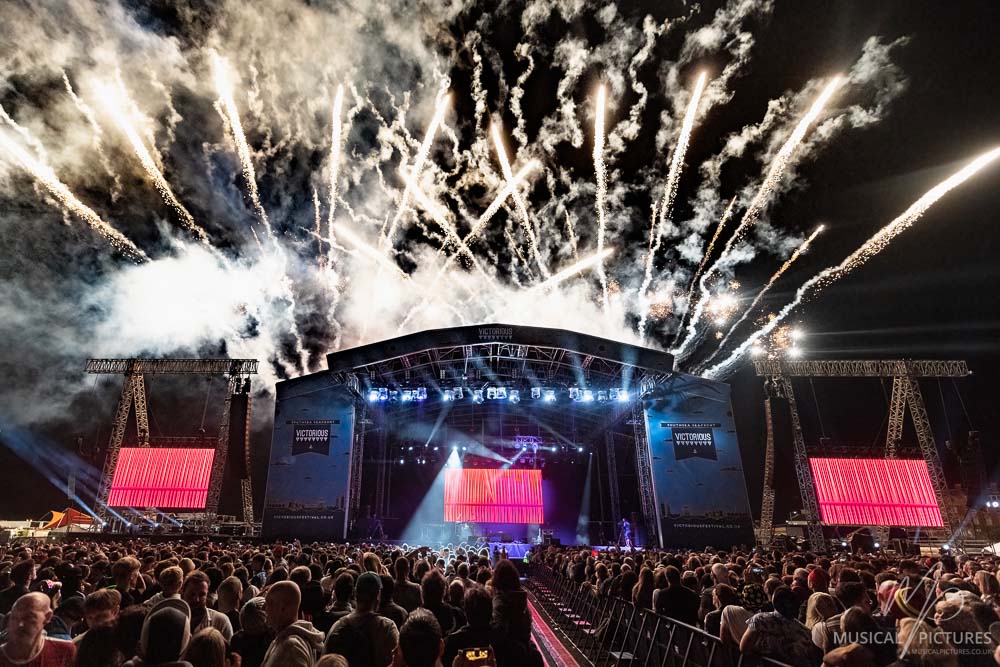 There’s so much to see and do at Victorious. Unless you plant yourself in one field and stay there, moving only to satisfy the demands of thirst, hunger or bladder, it makes for a great work-out, rinsing the stages for all they’re worth. You can certainly get what you need from the main two stages, the Common Stage and Castle Stage, but taking a chance on the smaller stages really pays off. Roxanne de Bastion’s Acoustic Stage set was conveniently located near a main thoroughfare. The number of people originally passing by, but then stopping to listen was testament to its quality. A bigger stage next time?

When you see the posters advertising Victorious, they teem with big names, many of which resonate from our younger years. More of those bands later, because Victorious also has an eye for current acts, which can seemingly hide in the smaller print of the undercard, but match their large-font banner mates in the stakes that matter: songwriting, stagecraft and charisma. Fenne Lily, Pigs Pigs Pigs Pigs Pigs Pigs Pigs, The Lottery Winners, Porridge Radio, Jade Bird, The Mysterines and The Lathums gave us early-to-mid-afternoon sets that could, in future years, entertain us later and for longer.

Fenne Lily and Pigsx7 played consecutively on Sunday afternoon. Fenne Lily’s songs, so easy on the ear, could not have juxtaposed more starkly with Pigsx7. Rock is historically associated with the seaside, but usually in its sugary and tooth-rotting guise. This set was more colourful than seaside rock and had joyful attack running through the songs in large letters – a true weekend highlight. Leigh-On-Sea may be somewhere else entirely, but The Lottery Winners endeared themselves early on Friday, bringing the spirit of Lancastrian Leigh to The Solent. Singing, “This is how it feels to be 21,” was weekend inspiration for any partygoer over thirty, as was, “I don’t wanna go home.”

Whoever put Annie Mac on after Pigsx7 seemed to be having a laugh. Truth is, that person was a nailed-on genius. Like one of those wind-up cars you have when you’re a kid, once you’ve got all that potential energy generated, it needs to be let out. Annie Mac’s DJ set was the perfect follow-up. All the Common Stage needed was a foam machine. Anyone that committed fully to The Common Stage on Sunday will have needed Bank Holiday Monday to recover. Fontaines DC were mesmeric. Grian Chatten might not have the badinage that his surname vaguely suggests, but you can barely take your eyes off him. That said, guitarist Carlos O’Connell is fast becoming the band’s second front man with his sartorial elegance and subtle theatrics.

Another great aspect of Victorious is the opportunity to tick huge acts off your bucket list. To head back to normal life, casually dropping into conversation that you’ve enjoyed Nile Rodgers and Chic, Madness, Supergrass and Manic Street Preachers (amongst others) leaves you on the brink of being ostracised by your mates for seeming so damn smug. Nile Rodgers and Chic provided the weekend’s absolute high point and such a fitting conclusion to Sunday night. It felt celebratory. How studio sound can be replicated somewhere in a field in Hampshire is testament to the impeccable skills of Rodgers and his assembled maestros. Chapeau, Mr Rodgers (probably of the Kangol variety).

Supergrass and Madness proved categorically that their bodies of work stand the test of time, as did Peter Hook and the Light. The latter gave the Victorious crowd a set stacked with Joy Division and New Order tracks and we responded with appropriate gratitude. Mr Hook did great justice to the vocals, as well as wielding his bass with low-slung stylishness. Cast, Terrorvision, Feeder and Melanie C all reminded us that the passage of time has not diminished their impact and, if anything, has just made them stronger.

Those who chose Royal Blood over Nile Rodgers and Chic on Sunday night went for raw power, or whatever the refined version of raw power is. Picking a more recent act to headline the Common Stage on Sunday night was a bold move that paid off. The Streets were always going to be embraced by the Pompey populace when they headlined The Common Stage on Saturday night. Mike Skinner sprayed the champagne from atop the monitor in celebration and then went and embraced the crowd to reciprocate the love.

The prize for the ‘Most Southsea’ moment came on Friday night as an enormous cruise ship passed within a few hundred metres of the Common Stage while The Kooks played, making us all feel small again just for a minute, when we were getting back into full festival mode and starting to feel like superheroes. Frank Turner celebrated the county of his upbringing with tales of drinking cheap cider on the Common and confessed that Southsea’s Pie & Vinyl was the location of his most hungover gig ever (as others worked on developing theirs).

Listening to Frank Turner singing, “It’s a long road up to recovery,” was a reminder that we’d missed these joys last summer, but we’ve come a long way since. Local band, Kojak’s Revenge opened the festival on Friday and finished their set with a rendition of Pulp’s Common People. For the next three days, we were Southsea Common people. And it was glorious.