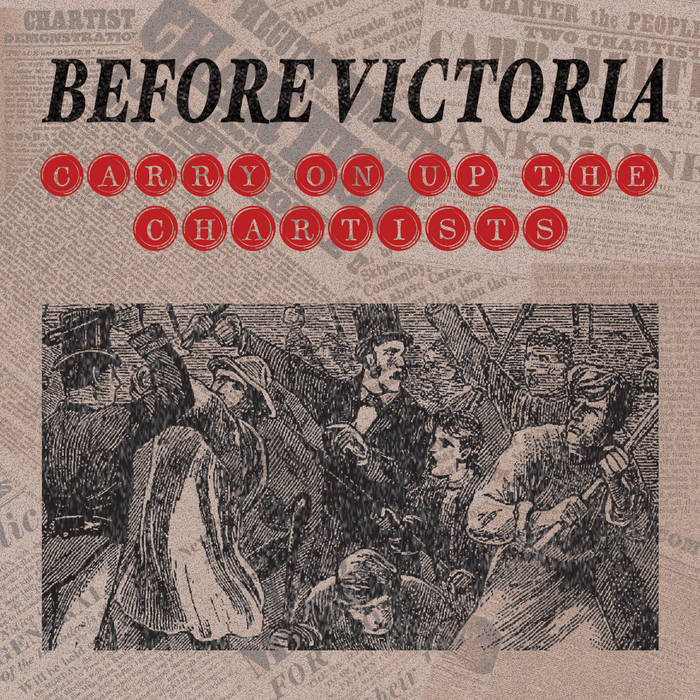 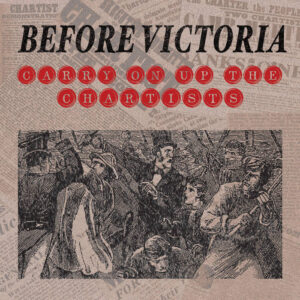 Before Victoria  –  Carry On Up The Chartists  (Bandcamp)

Solo project from bassist with The Men That Will Not Be Blamed For Nothing, turns out to be a brilliant mini-LP of  garage-punk grunge agit-prop.

“When we trod this land, we walk for one reason. The reason is to try to help another man to think for himself. The music of our hearts is roots music: music which recalls history, because without the knowledge of your history, you cannot determine your destiny…”

It might seem perverse to start a review of a Steampunk mini album with a quote from Misty In Roots (Live at the Counter Eurovision)  but this project is all about Marc Burrows love of history. The history of Popular Protest Movements in early 19th Century Britain -as it says on the cover of the accompanying booklet, before warning,- containing Socialist and Anti-Royalist Ideas.

As bassist in the Men That Will Not Be Blamed For Nothing he is up against two big personalities (and songwriters) in the shape of Andy Heintz and Andrew O’Neill so perhaps its no surprise that he needed another outlet for his own creative passion. Some of these songs were intended for the Men and a couple deserve to end up in their repertoire, if Before Victoria ends up being a ‘one-off curio’.

Whilst the Men seem to spiritually dwell in the Victorian era, Before Victoria looks back to the times before her reign ( Was there any need to say that?) ; the Chartists, Peterloo and other monarchs or would-be ones. Which may sound dry and ‘educational’ on paper but is brought to life in spectacular style by the musical format – which is basically Billy Childish plays the Manics or Nirvana – in a garage, with a megaphone and a mate on drums. And no budget.

Improbably it makes for one of the rawest and most emotional ‘punk rock’ albums of the year. He may call it ‘lo-fi indiepunk/grungepop with a 19th century twist’. But Burrows is a journalist, writer, an occasional stand up comic, and an unabashed socialist and he has created something very special with Carry On Up the Chartists.  OK there are puns – in true Carter USM style, and you may have to do a bit of background reading; (I knew nothing about Princess Charlotte I admit) but a couple of  these songs have a real emotional pull… and they’re about people who died 200 years ago!

‘Peterloo Sunset’ re-works the key line in Abba’s Waterloo as the telling ‘My-my at Peterloo,  Nobody surrendered!”. The vocal, sung through a megaphone gives it a Agit-pop edge and the guitar is pure dirty grunge’n’throb.

‘Princess Charlotte’ is a love song to an heir to the throne who, had she lived past 21, would have been there instead of  Victoria. A bit of a rebellious spirit and supporter of the opposition (the Whigs) she was grand-daughter of Mad King George. Bizarrely she inspired “a 100 punk-rock-bands from Leicester” the foremost pub venue in the city being named after her. Musically it’s a Garage-Punk Manics circa You Love Us.  When Marc sings “Reaching out 200 years, your story still brings me to tears… you’re always gonna be the Queen for me”, it’s with a yearning that sounds totally believable.   It’s a great love song, albeit with distorted ‘dustbin mod’ guitar.

The title track, ‘Carry On Up The Chartists’ has a great rabble-rousing chorus,” We the People, stand for equality..” whereas the verses are basically a countdown of the points in the Peoples Charter of 1838 set to a Grunge-Punk backing.

‘Dorothea In Britches’ is a bit more mellow, a psych-lo-fi setting a la TV Personalities to a tale about the mistress of William, Duke of Clarence (third in succession to the throne) an actress famed for her roles in mens clothing.  One of her descendants is a certain David Cameron. ( I’m getting all this info from the accompanying booklet – which is essential reading – but only after you’ve heard the songs a few times and judged them on their raw and raucous musical merits!)

‘Lullaby of The Left’ is basically a list song where the narrator plays I-Spy with various 19th century protest leaders & socialist thinkers.  “I-Spy Gramsci in the park, I-Spy Karl Marx!”  It’s pure Headcoats punk thrash and over before the two minute mark.

‘The Sailor King’ is about William IV who “Never really wanted to be king” and “born to sail the sea” yet a comparatively benevolent monarch in his short reign -allowing Whigs to introduce Reforms etc ( yeah I had to bone-up) and the plaintive yet bubbly garage guitar give the song a lot of pathos (and other Musketeers yeah, yeah yeah). It’s a strangely affecting song, about duty and patriotism without any of the normally associated jingoistic bull.

I really was surprised how much I thoroughly enjoyed this album – and still do, a fortnight on. Like any subject, history only comes alive when the stories are told with a passion, and in a way you can relate to it.  Marc Burrows does this by setting the narratives in gloriously raw and ragged indie-punk-rock-grunge tuneage.

He’s a vital part of The Men… who are all fabulous characters and who’s Not Your Typical Victorians album was a favourite of mine last year…. but this is a solo work to be proud of. Hopefully he can find the time to do a follow up in a year or two.

Watch the new Men That Will Not be Blamed For Nothing video, of which none other than Neil Gaiman said on Twitter : “This is remarkable. A good song, a genuinely scary video, and the fusion between the two is astonishingly effective.”  Spot on.

The Men That Will Not Be Blamed For Nothing are on tour throughout November – Dates here!