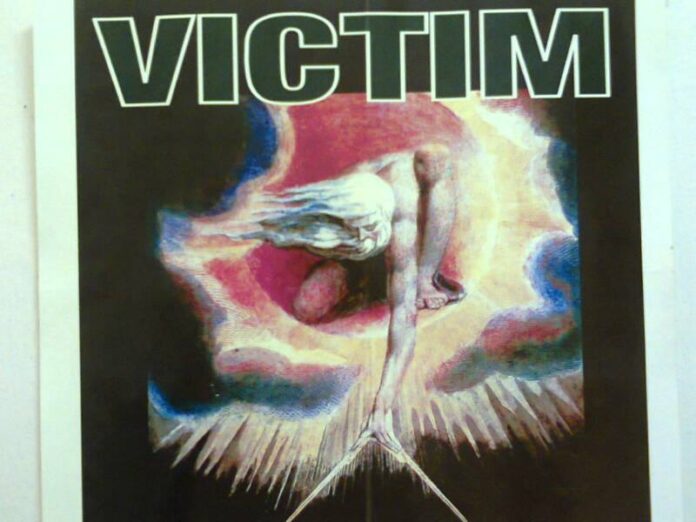 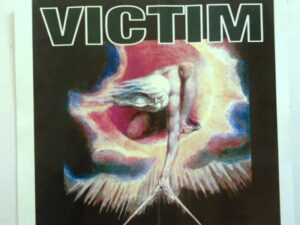 Victim have always been, in my own humble opinion, one of the punk bands most unfairly left behind by history, hugely underrated and every inch as worthy of success as their better known-contemporaries. Initially part of the Irish punk scene-signed by the heroically DIY, wonderfully optimistic Good Vibrations label, they later settled in Manchester (undergoing various line-up changes including at one point future Smiths drummer Mike Joyce). Their sound was very much that of the Good Vibrations pop-punk roster, but would also embrace the cerebral lyricism of the Manchester post-punk scene.

So I suppose it goes without saying that I’m excited about their new studio album “Swan Songs.” Wes Graham and Joe Moody are of course still the constant presence, and in an attempt to communicate his fixation with the existential Moody, Graham has undoubtedly created the finest lyrics of his career. The artwork evokes William Blake; drenched in spiritual and madness. But, to use a Blakean analogy, to what extent can Victim’s new songs of experience measure up against their wonderful late 70’s songs of innocence?

The opening track, “The Vacant Lot”, sets the scene perfectly by rolling all the key aspects of the album into one song; the opening chords remind me slightly of Sugar, before it gives way to the distinctly Victim melodic Irish punk sound. Its lyrics elevate a potential relationship song into something deeply existential, referring to “our Fall” and traditional tragedy images of darkness and light. The Blake analogy could easily remain; considering his illustrations for Dante’ Divine Comedy, as Moody keeps this kind of dark spirituality and classical imagery persistent throughout. Not that this is an album which isn’t concerned with the modern world, as themes give way to  “Trademark World,” its almost jangly melody deceptive of a serious concern on an advertising dominated world (“we live off the land so we advertise it”) , which evokes more of the droll cynicism of, say, Larkin’ “Sunny Prestatyn” than Milton or Blake.

For all their universal, relatable themes, Moody and co are equally open to keeping a personal edge on things, be it lyrically, as on the boldly moving, open-hearted “Back from the Edge”, or in the sound, as on one of the highlights “Star/Fish” which swells with the sound of Ireland and evokes the place and its traditions through nothing but aural impact. At the risk of lapsing into cliché, you can practically feel Leopold Bloom stumbling from bar to bar to the rhythm. Victim’s Manchester base may mean they are not an “Irish band” per se, but they do do this kind of thing very well. That said, the aforementioned edge of Manchester’s post-punk tradition still makes itself known – the moody darkness of lead-off single “In Your Grave”, all wry, almost Magazine-esque delivery with its spiky, rolling bassline, being the best example of this.

The album’s “official closer” (if one doesn’t consider the addition of the three visceral “bonus tracks” that made up the Empty Men EP I reviewed earlier this year) is “Eternal Darkness”, a reflective monologue on death which seems  a fitting closer for an album generally coloured by life and death matters and entitled “Swan Songs”. Not that the album sounds as if these should be their Swan Song – the bouncy youngsters who created such pop gems “As Strange Thing by Night” back in 1977 have allowed themselves to mature in a way which suits them very, very well, creating a well-rounded and accomplished record. Their early work is to often overlooked and it would also be a serious shame if this comeback was not treated with wide regard.

All words by Amy Britton. Find more articles by Amy on her author archive or on twitter as @amyjaybritton.