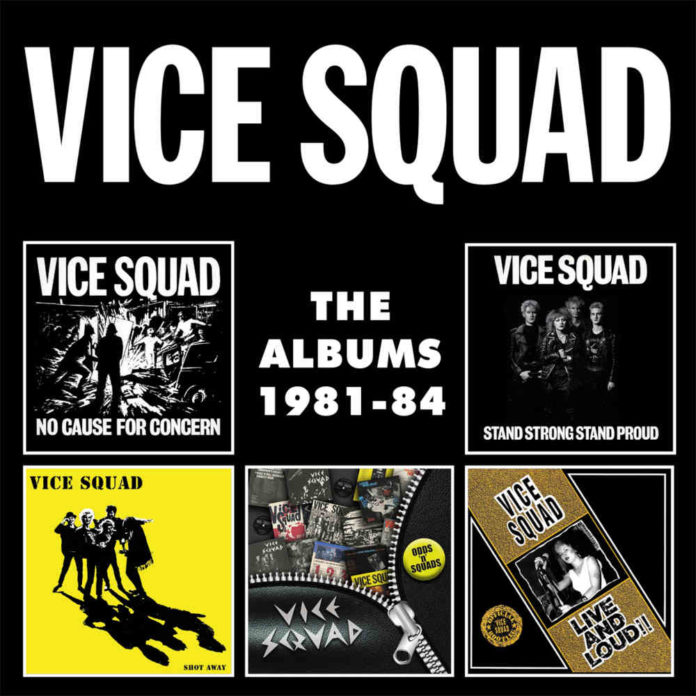 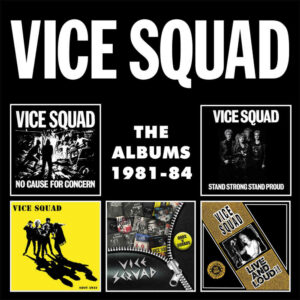 Boxset including every album the Bristol punks released during the early 1980s, including the chart hits No Cause For Concern and Stand Strong Stand Proud…LTW’s Ian Canty looks back to the brief time Beki and her pals were at the forefront of the UK punk scene……

Vice Squad made the debut recording not long after forming in 1979, on the excellent Bristol compilation Avon Calling album where they donated the song Nothing. With a line up of Shanne Baldwin on drums, guitarist Dave Bateman, Mark Humby on bass and Beki Bondage completing the band on vocals, they were a raw outfit with a lead singer in her early teens. During 1980 they only played six gigs and teetered on the brink of collapse, but in 1981 they cut the Last Rockers EP for local indie Riot City. The record was a success with the brooding title track becoming something of a classic. No less than John Peel became a big fan of the band and their star was in the ascendency. Beki provided a vital female perspective that was sorely needed on the overly macho UK punk scene of the time, being very bright and charismatic, she for a while became a firm favourite of the music press.

After another popular EP in Resurrection the band signed to EMI and presumably spent all of a pound producing the not very good No Cause For Concern album. This was really the classic case of a band recording a long player before they were ready. Some people say when Steve Albini produces he hates vocalists and always muddies their contribution – well he could have used No Cause For Concern as his sonic template.

This record sounds like it was recorded through a sock. The re-cut of Last Rockers was nowhere near as good as the original, but it stands head and shoulders above everything else here. Even the slightly promising songs like the terrace thunder of Young Blood and Nothing have the guts taken out of them by the iffy production. The Bob Dylan cover The Times They Are A Changing is horrible and most of the rest sound like they were put together a couple of minutes before they were taped. That it got into the mainstream charts probably had more to do with what the band represented and the good reception for their previous recordings than what was actually included. Not a forgotten classic, I think it is safe to say.

Thankfully the second album Stand Strong Stand Proud was a marked improvement. Of course, it’s sod’s law that it didn’t fare as well as the dodgy debut in the UK charts, but in every other way, it was superior. Better songs, better playing, better sound and you could actually hear the vocals properly too. Not exactly a great record, but a good one. Out Of Reach, a smart enough single which trailed the album just about made the Top 75, but this was to be the high watermark for the band. The anthemic title track was another good 7″ inch, but this second single missed the chart completely.

Of the other material Cheap sounds a bit like the pop-punk of C86 four years early, perhaps the Shop Assistants in a bad mood and No Right To Reply is agreeably fast and riffy. The band cover Bowie’s doomy Saviour Machine quite well and Rock “N” Roll Massacre combines powerful guitar work with a song about pop music fatalities including Jimi and Sid. There are a couple of offerings that fly by without leaving much impression, but the album ends strongly with the neat mid-pace stomp of Deathwish and strong anti-war song Propaganda.

All might have seen rosy with the band on the face of it, with them scoring another chart album and minor hit single. But behind the scenes resentment had built up between the band and Beki and the latter departed in 1983. Just after the time of the State Of The Nation EP (included on disc 4 here in its entirety), the band were seeking a new vocalist and record label. Seeing Beki as the driving force behind the band (wrongly?), the split allowed EMI to elbow Vice Squad out of the door whilst signing her new band Ligotage. Undeterred, the remaining Vice Squad members recruited ex-roadie Mark “Sooty” Byrne on second guitar, with Lia (real name Julia Rumbelow) replacing Beki.

Though not really a natural “punk” vocalist (before just joining VS, she had recorded with synth-pop act Affairs Of The Heart), Lia fit in well with the more musical and less hardcore version of the band. Shot Away, the record they came up with and third disc of this set, was the best album the band ever cut. The chunky sound of the dual guitars and Lia’s strong vocals help to give Shot Away a hint of Moving Targets-era Penetration. Far more rock than anything Vice Squad had previously set down on tape, the album was both entertaining and full-bodied.

New Blood, also a single, open things up in an energetic good fashion, full of percussive attack and a wry look back lyrically to their own chequered past. The following tracks Take It Or Leave It and Out In The Cold both please, with a hard-rocking approach on the former and the latter giving ample opportunity for Lia to demonstrate her vocal prowess. You’ll Never Know is another guitar-heavy delight and Rebels And Kings brings to mind (for me at least) the perfect new wave pop of the Photos.

The tacking on of a fairly straight version of The Sweet’s Teenage Rampage at the album’s end feels like an unnecessary attempt at a hit single, but otherwise, there’s a wealth of decent material. But because a lot of people still automatically associated Vice Squad with Beki and the perilous state of UK punk in 1984, the LP disappeared without making much of a mark. The band drifted apart not long afterwards. Teenage Rampage was belatedly issued as a single in 1985 and that was that, with some members going onto the band Sweet Revenge.

Thankfully some of the songs done a mischief on No Cause For Concern turn up as recorded on singles and compilations on the fourth disc of this set, entitled Odds ‘n’ Sods. These takes catch the early version of the band much better. They all have more punch and are clearer sounding, if not perfectly produced they are certainly more lucid. The Last Rockers and Resurrection EPs are included and provide early highlights, thrilling and chilling apocalyptic visions of 80s Britain. Coward and It’s A Sell Out, from the Riotous Assembly various artists album, are also better and makes one wonder why these mixes weren’t used on No Cause For Concern.

The Out Of Reach single tracks are shown in demo and finished forms and the top side remains a speedy treat. Later on this disc covers the Lia-fronted era of the band. It’s a real shame that they didn’t make much headway because they really had something. Black Sheep, the reconstituted band’s first single, has an unstoppable momentum to it and New Blood (Plus Version) gets an extended drum coda. They really didn’t need another dart at The Times They Are A Changing (but they did) because the likes of The Pledge show the band at this point were potent both musically and vocally.

The final disc here is taken from the band’s USA tour at the time of the Stand Strong Stand Proud album. This is one of those Live And Loud LPs that almost every 80s punk band seemed to have released for them “after the fact” in the latter half of the decade. It’s not a bad live recording, bit heavy with echo on the vocals but apart from that an okay set. They cheekily cover the Pistols’ EMI, a song which doesn’t really work for any other band, but they have a nice enough try and play a good mix of their material well.

Beki still leads a version of the band to this day, but for the definitive lowdown on their 80s heyday it is best to read Shane Baldwin’s endearing account Last Rockers: The Vice Squad Story (reviewed here). For the musical picture, most everything you need is on The Albums 1981-84.