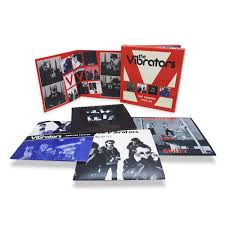 Boxset bringing together the three LPs recorded in the 1980s by the original line up of Vibrators, who reformed in 1982. This collection also features some demo recordings by the band from 1979 (with Knox) and singles from 1980 (with ex-Cane member Kip on vocals)…..Ian Canty wonders what the UK82 mob made of the original Punk Pop chancers……

After 1978’s reasonably successful second album V2, the Vibrators were in turmoil. Bass player Gary Tibbs (who himself replacing Pat Collier who formed the Boyfriends and then branched out into production) departed for a big-time gig with Roxy Music and after that Adam and the Ants. John Ellis also decamped to start his own outfit Rapid Eye Movement and play I’m Peter Gabriel’s band. This left lead singer Knox and drummer Eddie from the original line up. Greg Van Cook, ex-Electric Chairs came in on guitar and Ben Brierley, formerly of Label recording artists the Front, filled the bass spot. It was this version of the band that recorded the 1979 demos that make up one of the main points of interest in this boxset.

These demos, despite some iffy sound in places, are quite sparky and hint that there could have been a future for the band in 1979’s New Wave/Post Punk world. Taking up the baton from the previous Vibrators’ albums, the nine selections seem like a natural progression, with perhaps a little more guitar soloing, just in case the NWOBHM fans fancied something more spicy. The “call and response” between Knox and the backing vocals on Pushin’ Too Hard (not the Seeds song of the same name) works really well and Goin’ Uptown is a fine piece of Punky Glam Rock. Stitch You Up could have come direct from 1977 and Fighter Pilot takes things on a step from V2, tacky and proud of it New Wave.

After the failure of this demo tape to spark interest, the band broke up leaving Eddie (after a brief period drumming with R&B band the Inmates) left with the name. Knox went solo with a Psychedelic tinge, issuing a cover of Syd Barrett’s Gigolo Aunt and collaborating with Robyn Hitchcock. In his place came “Kip” (real name Malcolm Herring, formerly of the Punk band Cane), with ex-Eater bass player Ian Woodcock and guitarists Phil Ram and Adrian Wyatt completing the band. Though Disco In Moscow was a good single, this part of the collection is more a straight Rock mode.

Kip’s voice was more like Steve Marriott (or if you’re not feeling so charitable, Bill Oddie) than Knox and the likes of Lovin’ Machine and I Think You’re Lovely are a bit embarrassing. In their favour, the cover of Spencer Davis’ Gimmie Some Lovin’ does seek to do something new with the song. However the “new” Vibrators didn’t muster a following and soon split. Kip joined Mod band the Chords which was possibly a better fit for his R&B voice and that seemed that.

So it was a bit of a surprise when the original line-up of the Vibrators decided to reconvene in the summer of 1982. Of course, Punk was enjoying an Indian summer at the time, but much had changed since 1979. On the face of it, they were among the least likely of the old guard to flourish in the hard-core 80s, their supercharged and Londonised Lou Reed tunes not being much in evidence as a influence on the music being issued by No Future, Secret etc. Nevertheless some live appearances were very well received and that of course led to the possibility of new recordings.

I purchased Guilty on its release in 1983 and I think I only played it a couple of times, it flummoxed me back then. Even listening to it now, it is a pretty strange record. I suppose you have to give the band some credit for not recording a quick cash-in on their ’77 days, something predictable for the newcomers to Punk to eat up. This LP is varied and not always in a good way. Also, given the fact that Pat Collier was a producer who had already established a good reputation, I think it sounds a bit woolly and muffled.

Another change is that Knox, who wrote practically all of their previous two LPs, only provided four songs for the record. Seeing how his words and music set out the Vibrators’ style initially, it is hardly surprising that an album where he provides less than a third of the tunes is skewed in other directions. Even one of those four was a “Spot The Difference” re-cut of the 1977 single Baby Baby. Drummer Eddie, the band’s longest standing (or more accurately, sitting) member, also writes four numbers, with Ellis and Collier contributing two each. Which makes one wonder if this kind of democratic approach can ever really work in a band, particularly with the divergent paths each Vibrator had taken during the band’s down-time. The other two songs come from outside sources, with the Stones’ Jumping Jack Flash being in the Vibrators’ set since at least the 100 Club Punk Festival in September 1976.

Ellis’ songs tend towards the angst of his one time boss Gabriel, with psycho-dramatic The Day They Caught The Killer being the pick. Collier provides the naff Punk Rap of We Name The Guilty (which was re-recorded as the b-side to the Hang Ten single, both of which are included as extras), with Eddie’s Wolfman Howl attempting to ape the Cramps. Knox has a good go at mixing their old sound with Psychedelia on Sleeping and his Claws In My Brain is a decent song of regret, with loud/quiet sections years before Nirvana. Fighter Pilot was the only track from the 1979 demos to be exhumed on this record. Which bearing in mind the generally confused mess of styles, begs the question why did they not considering using more of the older material? On the whole despite a few highpoints, this album sounds a bit of a muddle, not knowing quite what it should be.

Funnily enough Dragnet, the non-album b-side to Baby Baby, is pretty much how a good 80s version of the band could have sounded with Knox in the driving seat. Fast and full of fire, it is considerable improvement on most of what is on the LP itself. The album did not connect with the old fans or intrigue newcomers and as a result missed out totally on the Independent charts.

The follow up, Alaska 127, was a better effort despite having a few dated 80s production tics on-board. Knox writes a few more songs on this one and the contributions from the other band members are stronger than on Guilty. He managed to knock out a classic in the very infectious Amphetamine Blue, so good that he recorded it with his part-time Hanoi Rocks-affiliated band the Fallen Angels too. The Pub/Punk of Jesus Always Lets You Down is fun and Ellis chips in with the gritty stomp of Peepshow. Flash Flash Flash is simplistic lyrically, but harks back to V2’s cartoon New Wave effectively and the mix of Flamenco guitar and a staccato beat on Shadow Love is novel too. A far more engaging record than Guilty.

Unfortunately, Fifth Amendment, the last album to feature the four original members of the band, is a pretty flat Rock LP. Other than Pat Collier’s amusing-ish pastiche of Elvis Costello/Graham Parker Wipe Away and album closer Criminal has a pinch of their early brio (but just a pinch), there’s not much else here other than MOR Rock. It was no surprise when they split up afterwards, with Knox and Eddie continuing to use the name for a long while after, until Knox left too a few years back.

Obviously, The Albums 1979-85 isn’t the place to start for people new to the band (I think this would be the spot), but there a couple of decent tunes on Guilty and Alaska 127 is by far the best album, despite the dated 80s production sound. I think the Vibrators may well have lost their way bit by the end, not sure what they were really about and putting out acceptable, but inessential, Pop Rock. Certainly Fifth Amendment flirts with mediocrity. While the actual albums themselves are more for the fan wanting the complete picture than what is contained on them, the main hook here is those 1979 demos. These recordings showed enough promise to suggest they had enough “in the tank” to have provided a fitting follow up to V2, but it was not to be. The Albums 1979-85 shows a band with plenty of talent, but a general lack of direction which held them back – they sparkled only now and again as a result.

The Vibrators will be appearing on SAT 26th MAY at ISLINGTON ASSEMBLY HALL,  where for the Very Last Time  the band will feature ALL original members and the classic V2 line up: Knox, John Ellis, Eddie, Pat Collier and Gary Tibbs, alongside Phil Ram, Nick Peckham and Nigel Bennett from the current line-up.  Support are Menace.  Tickets from here.

All words by Ian Canty – see his author profile here and his review of the Vibrators -the Epic Years 1976-78 from a year or so back here.