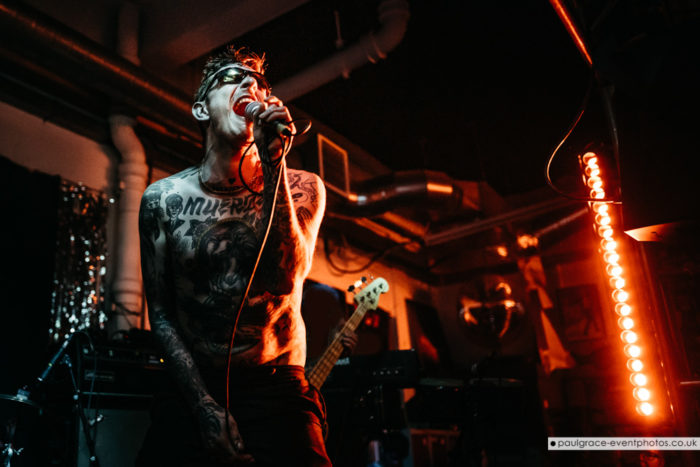 Viagra Boys? A surreptitious offer or a nightmarish trip to a sold out Record Junkee in the spiritual home of middle age male stripping. Actually it’s the dispensing of the thoroughly unwholesome rock groove of Sweden’s finest that has got an overwrought Steve John into a bit of a lather.

Singer Sebastian Murphy makes it immediately clear that the action is going to centre around him. Most of the songs come from last year’s best in show, Street Worms, but before we are half way through a pounding opener of the earlier Research Chemicals, the polo shirt and tracksuit top are off to reveal a sea of tattoos. The one near constant being the black shades and forehead inking of ‘Los’ being in your face from the off. Ignorance and the lumping together of disparate countries with one big Scandinavian brush leading me to think that means loose. Having got the art of injecting the sort of instinctive grunting and groaning into songs, like a debauched Cleo Laine, it would certainly suit him. 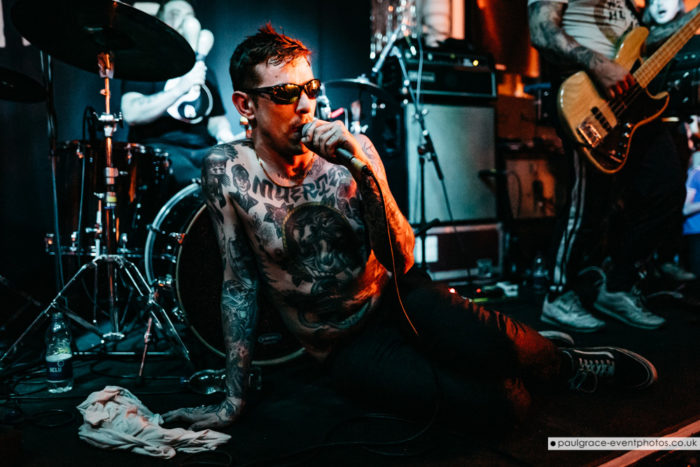 Second one in and they are playing my song. Slow Learner relying more on saxophone and guitar to compliment Murphy’s jaunty little strut. On slower songs, like Just Like You, he revels in more of a saucy swagger to suit the sounds that the youngster, who it looks like they abducted from school, is producing on the electronics. The story of a pressure to embrace suburban conformity, and then coming to terms with a rejection of its slow death and ‘fucked up society’ being beautifully realised.

It’s the space-age Stooges of Down In The Basement which produces the sort of proper crowd participation to prompt Murphy into a headlong meet and greet. With some bands diving into the crowd has started to feel like a contractual obligation. A career move rather than if I feel like it I will, if I don’t I won’t, but this had a feeling of something less scripted. Straight after making an effort is mocked with a version of Sports which proves a favourite with a group of people who look like they got picked last, putting more effort into this as they held a victorious Murphy aloft. Back on stage a repetitive shimmy provides the back drop to imaginary golf shots and beer bottle in mouth press ups on a stage which is already awash with fluids. The whole reprehensible mess weirdly reminiscent of an angry cruise ship entertainer in a different ocean of slime. 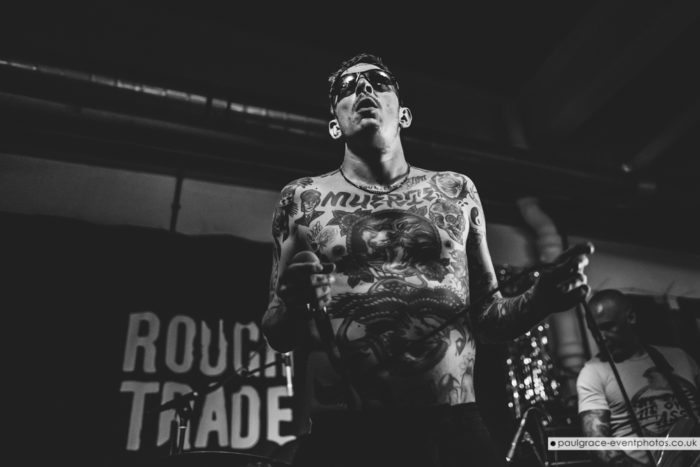 Helping to hold it together while Murphy does his thing is the excellently named, from this infantile British perspective, drummer Thor, who keeps it tight and mighty without the jazz flourishes he is capable of. Stage left is the imposing figure of bassist Henrik, leaning back to wrench a bass rumble worthy of prime time Stranglers. One in which JJ Burnell is standing on the throat of Roxy Music saxophonist Andy Mackay when the two instruments lock together on bowel loosening instrumental Amphetanarchy. This particular portmanteau a drug induced stomp with a dance like drop that produces spectacular results.

Job done you might think but not before the unapologetic sleaze fest of I Don’t Remember That excuses us from our inebriated mistakes. Until the morning when the garbled voices thing the band do at the end is reminiscent of the inane chatter from the night before coming back to haunt your sweat stained head. Last and certainly not least with its end workout is a splendidly seedy Shrimp Shack. That ‘we rolled in the dirt . . . got dirty’ seems to be based on the adolescent boy’s favourite sex with your friend’s mother jibe, a suitable crescendo for the first band in a while to make you feel like scouring afterwards. In a somehow good, no paper let alone hand wash, in a broken down toilet kind of way. 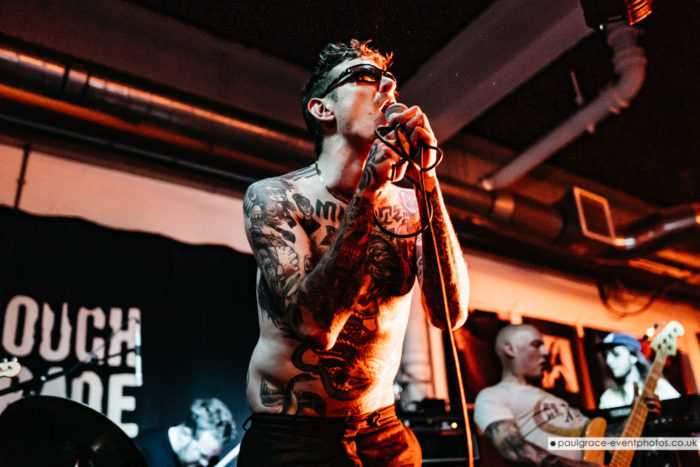 If there needs to be a serious point the name and presentation obviously highlight how rubbish men are but contrive to make our failure grimly entertaining. Maybe we’ll learn some stuff. My speed reading interviews on the way revealed unsurprising evidence of some trad punk histories but the different tastes and ages of the band members has produced something pretty unique. Jittery in a strung out way with the sometimes discordant interludes that tighten the nerves before being released by a chorus that arrives just in time. One of Murphy’s myriad tattoos that I can definitely read is just beneath his throat and says ‘You need me’. It’s a fitting tribute to a band bringing back some adventure and irresponsibility to rock.

Photos from Rough Trade East, 13th May 2019, © Paul Grace. For more of Paul’s photos go to his archive. Paul is on Facebook, tweets as @pgracephoto and his website is www.paulgrace-eventphotos.co.uk