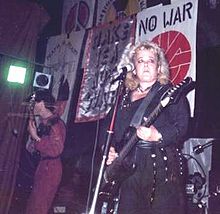 A hugely important figure in the music and counter-cultural movement often called Anarcho-Punk, but so much more besides. An inspirational woman. Has left us… but leaves behind a legacy and extended family to whom she was a spiritual mother-figure.   (Below is how her son, Pete Fender broke the news on Facebook)

It is with deep sorrow that I have to announce the mourning of my wonderful mum Frances Sokolov, known to many as Vi Subversa, who has passed away peacefully following a short illness.
We know that her death will come as a shock. Vi had recently celebrated her 80th birthday and only a few short weeks ago gave what was to be her final performance.
Vi led an extraordinary life in a variety of fields, but was no doubt best known as the lead singer, lyricist and rhythm guitarist in Poison Girls.
She was a key figure to a lot of people and we know that there will be a great many who would wish to pay tribute to her music and words, as well as to her remarkable achievements in life. We know too that she would want this to happen.
We are holding a private funeral for her close friends and family, and naturally there will be a public event to celebrate her life and work later in the year. We, her family, ask that our need for privacy be respected during this very difficult time.
We are confident that Vi would not wish her friends and fans to overindulge in sadness. We all feel that her life was complete and should be celebrated. She made it to the milestone, and her time had come. Flesh and blood is what we are.
Love,
PF x