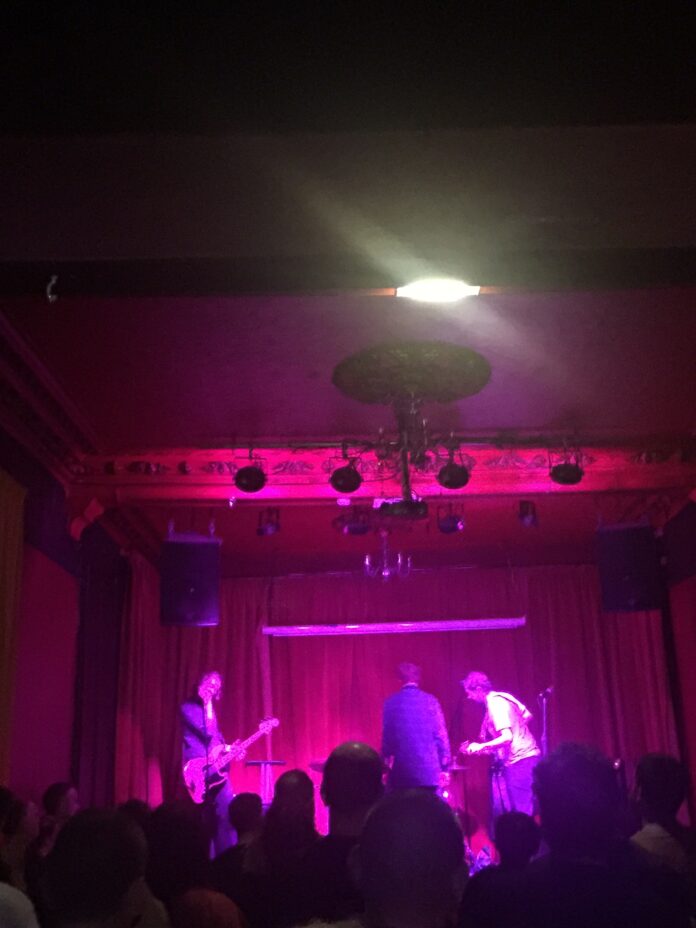 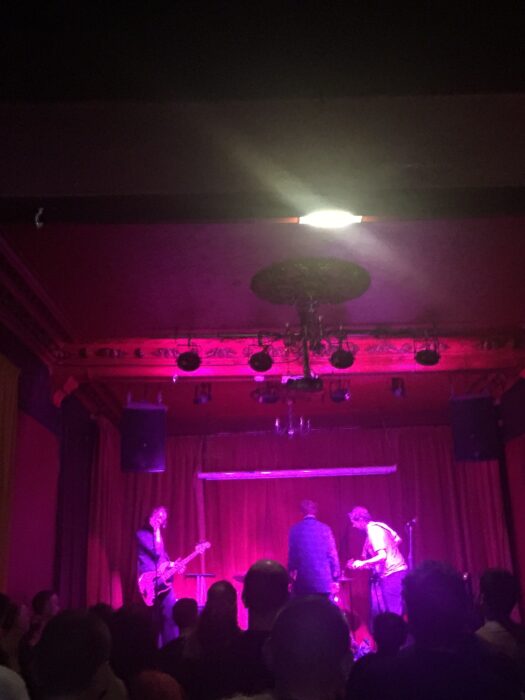 On the night that Greece voted ‘No’’ to austerity, a small scale DIY scene is doing the same on a smaller level in Manchester – buzzsaw guitars are voting no to the evil empire that is crushing showbiz into cultural austerity with seething packed pub rooms like this invigorated by a beautiful racket.

My eyes are stinging with exhaustion and my clothes are dripping with a mid summer rain storm but this is an afternoon gig and I am trying to make it to the end whilst surfing on the raw power and suicidal imagination of a bill that is kinda 21st punk but with its own cultural baggage.

The key name here is Sauna Youth – a band who took their name from the Joe Cole book about his life on the road with Henry Rollins and are steeped in the DIY / underground / Dischord dat-chord mythology of creating thrilling off kilter music on your own terms and damn everything else.

Their releases have been pure electricity- fast and furious songs driven by an infernal intelligence and musicality- they are shotgun, buzzsaw punk rock of the classic DIY variety but steeped in all the classics. Their Distractions album is everything that punk rock promised to be in those opening few months of 1976 and the opening few salvos at its long gone inception before it tuned into whatever it turned into.

This is the punk rock of fanzines, cut and paste clothes and a cut and paste culture, a xerox machine scene when anything went. Sauna Youth are no mere museum piece though – they have their own cultural lineage and there is fair amount of indie aesthetic in there as well as the aforementioned DC hardcore scene, it’s just that they play far, far fiercer and with far more power than most of their record collections that combine the visceral rush of the guitar noise with girl group harmonies.

They tear into their set with a perfect precision, the guitar player’s head twitches manically and his perfect, too tight Oxfam jacket is bursting at the seams as he saws away at his six string, the bass is melodic and in a rush and Calleja’s vocals deliver the seething decay of the last days of London perfectly – Sauna Youth are from Brighton but moved to the big city just in time to watch it get swallowed up by the oligarchs and become the playground for the rich.

They are crammed into a Hackney bolthole and are some of the last artists existing in a city that is becoming too expensive for anyone with a creative soul. Their music somehow captures that critical desperation and a fascination with the city and their short rushes of sound are, perhaps, like Wire at their most genius or Buzzcocks eternal Spiral Scratch takes on minimalism and maximalism – or early Minor Threat with an added love of girl group splendour, a music stripped of all artifice that somehow has even more possibilities.

In short Sauna Youth are thrilling.

They also open the night with their Monotony alter ego – where they all switch instruments and make not only a whole set but a whole band out of one of their own songs and hark back to an even tinier never ending possibility thrown up by punk rock that was forgotten in the centuries that followed- the anti performance that is more compelling than the performance.

Stripping everything away, this is rock at its most perfectly basic – zig zag barre chords, out of breath drums and clanking one note bass lines and a vocalist who looks so brilliantly bored standing in the wind tunnel of performance that you can’t keep your eyes of him. The fact that this is Sauna Youth supporting themselves by just switching their membership around is even more perfect- like they have out manoeuvred even themselves.

Monotony are the 21st century version of the very early Fall, the Prefects, The Worst, even pre Spiral Scratch Buzzcocks! and, again,Wire and even the very early Sex Pistols when rock was all fat and bulbous and waiting to be destroyed by these skinny, underfed kids with fierce agendas and high IQ’s who saw through all the artifice and pomposity and stripped it down to its primal and genius basics with singers who totally subverted the whole notion of ‘singers’.

In the 21st century Monotony are the direct opposite of all the stage school rhetoric, all the music colleges and their narrow notion on what makes music – this is the sound of the eternal DIY – yet another stripped down built up 20 minutes of perfection. They are the postcard from the frontline and the combination of that promise of the real revolution of very early punk- that glare in John Rottens eyes before the circus arrived and they are also so 21st century it hurts.

Later on The Vital Idles are fantastic concern – a very musical band – like the Smiths through fuzzbox- with a very nimble bass player whose nimble runs hint at Andy Rourke in the band’s cranked rushes and a singer whose deadpan delivery and quirky lyrics make her like a female version of Morrissey – again it’s captivating and its off kilter edge making it totally engrossing.

We try to make it for Vexx having loved their records but the exhaustion of playing a gig the night before and drenched clothes are making it too tough and we have to bail with ears wringing with the never ending perfect crank of intelligent, slightly deranged people making a beautiful racket and defying the corporate put down of culture making you still feel pretty damn good.