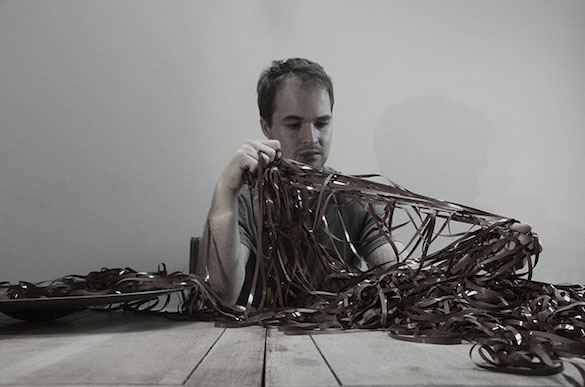 As Mary Anne Hobbs will confirm, Bristol’s always been at the forefront of UK bass culture scene, so it comes as no surprise to learn that at the groundbreaking cutting edge of new, future sounding electronics is a collective based in that city. That collective is the Young Echo Collective and helping them lead their charge is one Sebastian Gainsborough, aka Vessel. It’s just been announced that Vessel’s sophomore album, Punish, Honey, is due to drop on 15th September 2014 via Tri Angle Records. More details can be found below, along with news about a unique, home town show featuring Vessel and the incredible, genre defining genius who is Shackleton.

Punish, Honey is the follow up to Vessel’s critically acclaimed debut album Order of Noise, and we’re told (as we’re yet to hear the album ourselves) that it finds the always unpredictable Bristol based producer “continuing to challenge himself and listeners alike,” something that first single, Red Sex, which you can stream below, backs up.

“Wishing to move away from working with archetypal electronic sounds, with Punish, Honey Vessel sought to create something that felt more organic, even if the sounds themselves didn’t always feel inherently organic. That lessening interest in electronic sounds was concurrent with a burgeoning interest in natural sounds, in particular, how the physical body has a direct effect on the nature of the sound, whether it be harsh or pure, messy, violent, seductive, or strange.”

“Using sheets of metal as percussion, sawing up bikes to make flutes and creating harmonic guitars all by his own hand, Vessel created his own set of crude instrumentation exclusively for this record. Combined with an interest in notions of national identity, Vessel asking himself the question “What does ‘Englishness’ in music really mean?”

Also just announced is a unique show combining the talents of two of our favorite promoting arms, Howling Owl Records and Qu Junctions. The pair are taking over the abandoned police cells in the bowels of Bristol’s The Island at Bridewell arts complex to provide …

“…an evening of utterly uncompromising live / club music actions, with a line-up worth doing time for. Featuring an ultra-rare, intense and intimate Bristol appearance by Shackleton, undisputed mind-altering master in the realm of dancefloor dark arts; a hometown live showing by Vessel to toast the scuzzed-out wonders of his new album ‘Punish, Honey’: the righteous return of BUNKER resident Container after his anvil drop of a set last time round alongside Cut Hands and Blood Music, plus rhythmic noise detonations from local juvenile offenders Giant Swan.”

This is going to be a night to remember, so keep Friday 10 October 2014 clear in your calendar and make sure all roads lead to The Island at Bridewell in Bristol. The Facebook event page is here.

Punish, Honey is due for release on the 15th September.

All words by Guy Manchester. More writing by Guy on Louder Than War can be found at his author’s archive. He can also be found on twitter as @guid0man.