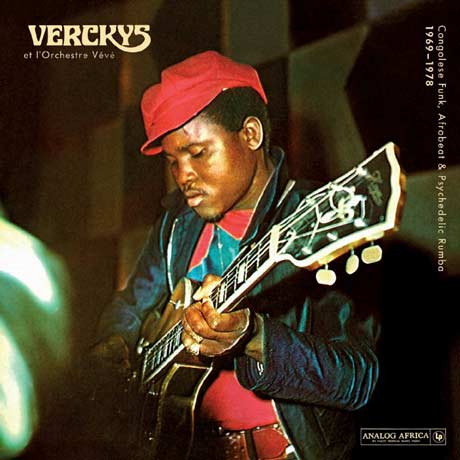 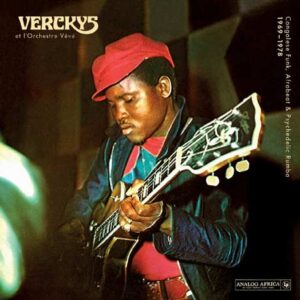 You’ll already know Verckys and not know it. You may not know the name Georges Mateta Kiamuangana, but you will recognise many if the sounds and styles in his music. Just listen to album opener Bassala Hot and deny that James Brown didn’t ‘borrow’ a riff or two.

Such was the influence of Verckys. Forming his band, Orchestre Veve in 1968 he exploded onto the Rumba craze sweeping the Congo after a brief inclusion in Franco’s OK Jazz, the country’s most popular band. He left OK Jazz with a vision of bringing the Congolese sound up-to-date with a mixture of Soukous (a variant of Cuban Rumba) and Merengue where after Brown named him Mr Dynamite.

The eleven tracks featured here follow a journey almost spanning the whole of the 70s where Verckys performed not only Rumba’s but also Afro beat, funk and pop interspersed with freeform sax solos. The album contains tracks previously unheard outside the Kenyan market for which they were recorded – Talali Talala, Cheka Sana and Bassala Hot are classic slabs of a musical style which is still influential to this day.

Verckys had ambition too. His Veve Centre complex for entertainment led to setting up the first record pressing plant in the Congo and his own recording studios. The life and feel of his music is there for all to witness. It’s effervescent, it’s vibrant and it’s as relevant now as it was forty years ago and in many ways is difficult to believe it wasn’t recorded yesterday.

In the same way that Fela Kuti stamped his mark on a popular culture, so too did Verckys. His saxophone solos are often quite remarkable making the instrument almost bark in pain, and his guitar prowess is second to none.

There are even ventures into Blues with the brilliant Sex Veve and more relaxed tones on the likes of Zonga Vonvon. This is a great introduction to the sound and music of Verckys.