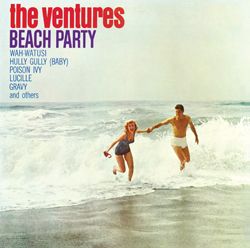 Coming between the initial exciting outburst of primal rock n roll and Beatlemania, the first years of the 1960s were an odd time of honey-dripping teen idols, squares dressed up as rockers and most importantly the first time that “groups” really came into their own rather than being just backing bands for singers. In the UK the Shadows (originally the Drifters, until they found out about the American vocal group) moved out front after backing Cliff to a separate career which would influence untold numbers of the coming 60s beat bands up and down the country.

The Ventures, from the frat-rocking fields of Tacoma, Washington (to be followed a few years later by local wild-men Sonics), were similar in style to Hank Marvin’s merry men and there seems to be a bit of uncertainty of who exactly came first. Putting that aside, the Ventures themselves were hugely popular in the USA and George Harrison for one is quoted as saying he preferred their guitar sound to British based contemporaries. Also as they developed their muse they caught the first waves of surf too, influencing that whole scene. Added to that they were possibly the first act to use a fuzzbox and by switching from Fenders to Mosrite guitars not only helped launch the trademark sound of the surfers but also put an idea into a young Johnny Ramone’s head.

Their massive 1960 hit “Walk Don’t Run” introduced the world to their up-front mix of swinging drums and “singing” guitars. Moving on a couple of years they were still a massively prolific and influential outfit and their “Play Guitar With The Ventures” helped thousands of aspiring axe merchants on their way.

The collection that we have here works as a “best of” but its main feature is the entire “Beach Party” (also known as “Mashed Potatoes And Gravy”, but I think the better title stands) album from the watershed year of 1962. The LP sleeve perfectly captures that carefree moment of space-age America, just before the Kennedy assassination blew that innocence away for good. As for the record itself, a fairly sedate approach is in place for the most part with occasional vocal interludes on “(Baby) Hully Gully” and bursts of wildness like “Gravy”. This is really a listening experience that we don’t have too often in 2016. Most people recording today would not have the restraint to record so simply and without any studio trickery. The perfect antidote to overblown 1980s production techniques indeed.

The record is mainly made up of R’n’B covers souped up the Ventures way into near spy-movie themes. In fact if I didn’t know better I would swear this was a soundtrack LP by the look and sound on offer (it isn’t – predating the “Beach Party” flick by a year). Though they and the Shadows had a lot in common, the Ventures were always a bit scuzzier, a case in point being “Spudnik” which the Lively Ones covered as “Surf Rider” and featured in film “Pulp Fiction”. “Spudnik” has an elastic bass sound leading the way whilst the solo notes twist around in sweet and sleazy ways. In fact funky bass lines prevail, taking tracks like “Hot Summer” somewhere else entirely. “Poison Ivy” is a particular delight of swooping riffs, reverbs and jangle, lovely.

The remainder of the CD breaks down into EP and singles sides plus the Johnny Smith and Chet Atkins earlier, more laid-back attempts at the Ventures signature tune “Walk Don’t Run”. The “Ventures Play Telestar” tracks show the worldwide influence of Joe Meek and the Shadows during this period – the version of the aforementioned “Telestar” being fine, more organ led but missing Meek’s unearthly touch. Their take on “Apache” does have the required vim though.

One of the true delights on this CD though is the fuzz-laden single “2,000 Pound Bee” parts 1 and 2 – full of punk attitude – it was 1962!! The Shadows for all their positive attributes never went this far into hell-raising surf punk mayhem!!

We tend to overlook the post-Elvis, pre-Beatles years as naff and austere, but in truth a lot of good stuff was still going on. The Ventures certainly brightened those times with their singular and methodical approach,really did set the pace for the coming garage bands and 60s America in general. Listen to this hear something truly different.

The Ventures are amazingly still performing and on Facebook here.