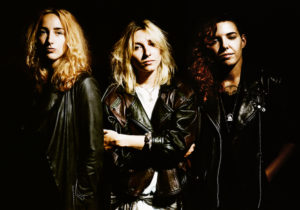 Velvet Two Stripes are a Scandinavian band and its all leather thrills and helter-skelter drumming, scorched vocals and Delta blues guitar. This sounds all very nice, but who the hell are VTS?

Consisting of sisters Sophie and Sara (and co-conspirator Franca), the band’s sleazy riffing and blues charm calls to mind trailblazers such as The Kills, Yeah Yeah Yeahs and Deap Valley. Already well known in their homeland, and having been dubbed “the coolest Swiss band ever”, Velvet Two Stripes are now gaining some much-deserved international attention.

Hey Boy starts with a gorgeously scuzzy guitar that evolves into a monster riff that would put AC-DC to shame. The in your face, ballsy female vocals combine with the throaty feels to the lyrics so you are led into the realms of middle aged gardening.

The infectious guitar riffs, screaming vocals and the video for the EP’s first track Hey Boy continues to kick the likes of Royal Blood to the curb to make way for VTS’ badass Riot Grrrl antics. Hey Boy gets you hooked immediately; in the band’s own words – “this is exactly what the song is about. Being fatally attracted to someone. All or nothing.”  Lead vocalist Sophie’s raw voice drags you to the dance floor while the seventies organ wraps itself around you. Rarely has such a snotty and bluesy all-girl outfit emerged from German speaking grounds, and now that they have broken out to the rest of the world they are here to stay. If you haven’t got to grips with this Scandi rock trio then do yourself a favour and check out their new video now.