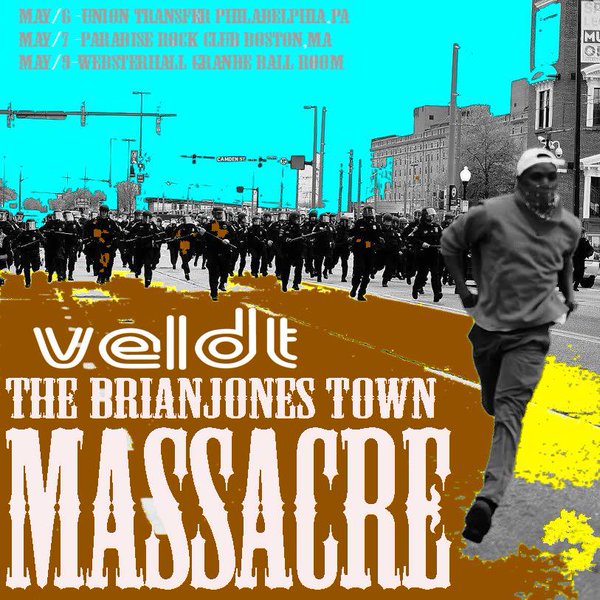 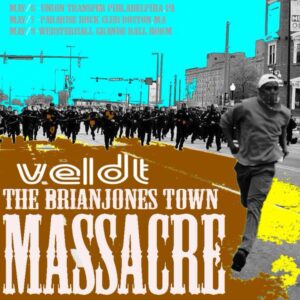 What’s in a date? If you look back at the history of May 6, you’ll find that this date if full of revolution, war and turmoil. On this day in 1527, Spanish & German Imperial troops sacked Rome, effectively ending the Renaissance. More significantly related to America, in 1861, Jefferson Davis approved the bill declaring War between the Union & the Confederacy. On the other hand, beauty and change have come to light on this day, shining for all to see – May 6, 1889 saw the Exposition Universelle (World Fair) open in Paris with the completed Eiffel Tower.

In a nutshell – we have revolution, change and a beacon of light. So symbolic that this year, May 6 also brought two epic events to the world of music lovers on both sides of the Atlantic – Lush finally had their long-awaited performance at The Roundhouse in London. Meanwhile, it was the start of a 3-city minitour shared between The Brian Jonestown Massacre and The Veldt – two pioneering legends in their own right and pinnacles of light and change on the underground music scene, taking their two respective tidal waves of sound to audiences in Philadelphia, Boston and New York City.

On 6th May, Philadelphia’s Union Transfer was sold out to a hungry crowd as plenty of talk abounds about last nights show at Boston’s Paradise Rock Club (also sold out), where BJM frontman Anton Newcombe announced on Twitter that The Brian Jonestown Massacre will be joined by Lemonheads’ frontman Evan Dando.

Headliners BJM are known far and wide to anybody with their finger on the pulse in the past few decades. They are joined by The Veldt, whose pioneering role in American shoegaze and alternative soul have produced perhaps the most interesting sonic offerings available for either sub-genre. Imagine a cocktail of Cocteau Twins, gospel, Motown, Massive Attack and Pink Floyd. No you can’t imagine it – you just have to hear it for yourselves.

Brian Jonestown Massacre is touring in support of their new album, Musique de Film Imaginé (music for film imagined), an imaginary soundtrack paying homage to 1950s-60s celebrated European film directors, such as François Truffaut & Jean-Luc Godard. It, like other recent BJM releases, was released through A Recordings Ltd.

On their current tour, Anton Newcombe and BJM have been lighting a torch via social media in support of two particular charities – Oxfam and Medicins Sans Frontieres – offering free tickets through raffles among those donating to these invaluable non-profits.

The Veldt is comprised of Danny Chavis on guitar, Daniel Chavis on vocals and guitar, Marvin Levi on drums, Hayato Nakao on bass guitar, and Frank Olsen on guitar. Musically reared in the church and juke-joints of North Carolina, the twins have been performing since they were children. The Veldt is no stranger to the music industry – previously signed to three major labels, they’ve recorded with celebrated producers Robin Guthrie (Cocteau Twins), Ray Shulman (Bjork, The Sugarcubes, The Sundays), and Lincoln Fong (Moose), and with Rudy Tambala of pioneer dreampop outfit A.R. Kane on board for this their latest EP The Shocking Fuzz of Your Electric Fur.

The new EP is their first release as The Veldt in about 15 years, winning them accolades far and wide, including in The Guardian, Soulhead, Wax Poetics, The Village Voice, and Wire Magazine, among others. Named for an E.E. Cummings poem, this EP is now available via Bandcamp (CD, digital) and Leonard Skully Records (vinyl).

The Brian Jonestown Massacre and The Veldt will perform on May 9 in New York City at the Webster Hall.

The Veldt is on Bandcamp at https://theveldtmusic.bandcamp.com. They can be followed on Twitter as @VeldtThe and Liked on Facebook.

The Speed Of Sound: Museum Of Tomorrow – album review