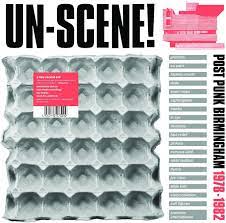 New Collection examining the hive of activity centred around Birmingham during the post punk years from 1978 to 1982. The bands featured include Swell Maps, Au Pairs and The Prefects, plus their later incarnation The Nightingales. The set also comes with sleeve notes from scene mainstay Dave Twist and Stewart Lee. Ian Canty is down and out in the West Midlands…

Although Birmingham gave 1970s punk one of its key venues in the Barbarellas Club that hosted visits by The Sex Pistols, The Clash and many others, the city’s musicians struggled to make the same impact as bands in London and Manchester. Unlike the latter, Brum didn’t have a figure like Tony Wilson to give them a foot in the door of local media and no label emerged at anywhere near the same level of Factory. At the time this was a major disadvantage, as the bands did not have an infrastructure of any real kind to draw strength from. They could only make an impact if the London-based music scene was interested at all. Now though, we listeners can reap the benefit, because Un-Scene! charts a wild variety of sounds, ideas and innovation.

Fashion Music begin Un-Scene! with We’re The Fashion. Dropping Music from their name and with a different line up, they very nearly crossed over to UK chart success in the early 1980s with the electrofunk single Streetplayer. In 1978 though they were headed up by the towering figure of Al “Luke Sky” James and on their contribution here a queasy mixture of punk energy, near-prog touches and glam attitude is all drawn together. Next come the mighty Swell Maps with Vertical Slum, hyperactive punk ramalama which fractures in just over a minute into acapella. One day hopefully someone will make a much-needed documentary about this fascinating outfit that pre-dated punk and recorded a diverse variety of essential material. Dada, a short-lived aggregation that recorded a John Peel Session in 1978 and contained future Duran Duran bassist John Taylor and Dave Twist, then give us the bass-heavy and oppressive tribal noise of Birmingham UK.

In the current post-King Rocker climate, it would be easy to view The Prefects as merely a punk-era launching pad for Robert Lloyd and The Nightingales (who feature later with their rattling, urgent debut single Idiot Strength). This would be completely ignoring the fact that they themselves were extraordinary, something that can be just about gleaned from the lo-fi but riveting live version of The Bristol Road Leads To Dachau that is included here. TV Eye’s Steve’s Radio Station display the US influences their name suggests, but it is truly fantastic with the late Dave Kusworth’s guitar ringing out clear and then the obscure Denizens on their tense effort Ammonia Subway sound like solid hard/street rock given a post punk overhaul.

The Hawks super Big Store you may have heard on their excellent Obviously 5 Believers set (if not, have a look here) and The Nervous Kind, caught in the summer of 1980 by Bob Lamb, give us a louche and memorable Five To Monday. We catch up with Dave Kusworth and Dave Twist again as part of The Bible Belt, with their 1981 short and sweet recording A Fistful Of Seeds finding acoustic and electric guitar ebullience and vocal ennui combined in a similar way to the one that would make The Smiths a pile a few years later.

Moving onto the second half of Un-Scene! we encounter Lowdown International with the hypnotic, crawling paranoia of Batteries Not Included and former Prefect Joe Crow endows us with The Final Touch, where a rhythm machine is used to help construct a decent stab at a melodic punk rock sound. Nikki Sudden of Swell Maps is caught during his solo career after the band split in 1980 on the lively and appealing Channel Steamer and the marvellous Cult Figures have I Remember from their second single featured. This number is a downbeat, mini-pop punk done just right.

I always found Au Pairs to be far more fun than the rather straight-laced way they were depicted by the music press at the time. Their Love Song is full of keen post punk jabs of rhythm and guitar shapes, with real funk dance moves in its bass attack. Fast Relief follow with the cool What A Waste and they could almost be Au Pairs’ younger, punky siblings here. Marking an early appearance of Cara Tivey, who would later join the Au Pairs and subsequently become a long-term member of Billy Bragg’s band, were the five piece Vision Collision. The rough sounding Cuba, taped during the winter of 1980, shows a band full of tightly-wound potential, experimenting successfully with sound textures.

Moving on, Dance’s bass player Martin Recci would later join Fashion when they had their new romantic brush with the UK charts. Their Revolve Around You is a pretty catchy mix of percussive bounce, handclaps and guitar fuzz, with male and female vocals gelling before a tape rewinding leads us into an extended dub section. The final track of Un-Scene! is Open Commune by The Pinkies (nothing to do with Basildon power poppers The Pinkees who had an early 1980s hit with Danger Games), which is rather like how a female Killing Joke with a saxophone might sound.

Un-Scene! has been excellently put together and the sleeve note gives the reader a real feel for what was going on in the city during the timeframe examined. Birmingham’s punk and post punk acts have been fairly ill-served in the past, but this fine collection helps to redress the balance somewhat.