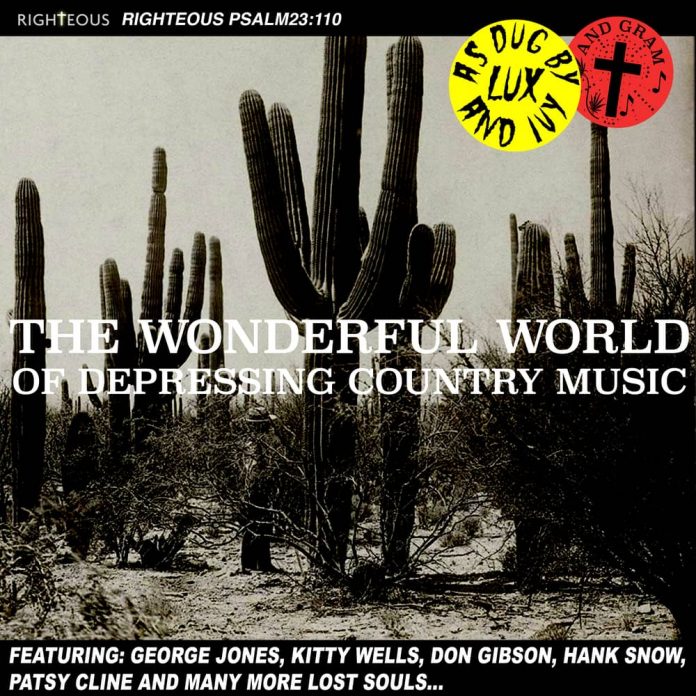 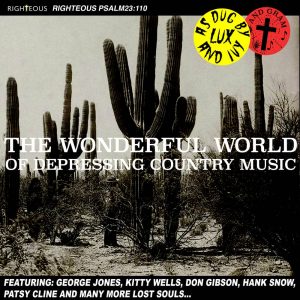 Righteous’ Lux And Ivy series moves to a country and western setting and Gram Parsons also adds his approval from beyond the grave. Big names like George Jones, Patsy Cline and Eddie Arnold are on hand to document how rough a cowpoke’s life can get. Ian Canty sobs into his Stetson…

Now I know the cheeky devils amongst you will be thinking along the lines of “all country music is depressing, so what’s new?”, but the other side of it is that country and blues both explored the dark side of life more than most other kinds of 20th century music and did it earlier too. In documenting the small victories and bitter defeats of ordinary living for a great swathe of the American population, it helped to set up a blueprint for the vast majority of popular music.

The Lux And Ivy umbrella which The Wonderful Word Of Depressing Country music comes under isn’t exactly a watertight connection and feels a little tenuously applied here, though the certain amount of kitsch and comic mawkishness on show does make the tag slightly more viable. I suppose it is as good as any to gain attention of newcomers to c&w’s. Having dealt with that issue, we’re all ready to explore the dire depths of human emotion on the dusty landscapes found in the Wild West of the 1940s and 1950s. There are some greats of country music like George Jones and Patsy Cline aboard this set, but for the most part the focus here is on the arcane. With a double helping of heartache on the cards and pedal steel to the max, let’s take a decko.

The first of two Goldie Hill offerings Call Off The Wedding starts off this set. As an intro a minister begins officiating the ill-fated nuptials, before Karnes City’s own Goldie jilts a john at the altar. Goldie had a c&w career that started in the early 1950s and was all done by the end of the 1960s, but I’m The Loneliest Gal In Town, her other offering on The Wonderful World Of Depressing Country Music, is charmingly sweet and made me wish to hear more.

Far better known are Country Hall Of Fame inductees Don Gibson and George Jones. The former gets down in the dumps on Lonely Street, with the latter puts on a brave face on There’ll Be No Teardrops Tonight, which is enhanced with a tinkling piano and some lively fiddle work. It’s an excellent and gently rocking number and George returns later with his own Don’t Stop The Music (get out of here Rihanna!) and also a snappy version of Gibson’s called card Oh Lonesome Me. Don himself also scores again with a tear-jerking It Only Hurts For A Little While.

Hank Snow and Anita Carter have two duets featured on The Wonderful World Of Depressing Country Music, with the nostalgic tug at the heartstrings I Dreamed Of An Old Love Affair possibly having the edge over I Will Never Marry. Hank goes solo on the tale of a wayward son losing a parent in Letter Edged In Black and also has a maudlin masterclass called There’s A Little Box Of Pine On The 7.29.

Heart To Heart Talk by Kitty Wells throws in a few doo wop and rock & roll moves in effectively and her I’ve Got A New Heartache struts with similar assured and smart step. She features four times in total here, with We Buried Her Beneath The Willows competing strongly with The Stanley Brothers’ hillbilly folk of Are You Afraid To Die? as the best death song present.

The Carlisle Brothers’ harrowing and memorable 1948 number Tramp On The Street is real “lump in the throat” stuff. Patsy Cline will of course need no introduction to c&w buffs, with Crazy being a bona fide classic 45. Her debut single A Church, A Courtroom And The Goodbye is beautifully sung – it is clear she was a star from the word go and her second item The Heart You Break May Be Your Own is a consummate cautionary tale. WW2 hero Skeets McDonald gives us the downbeat sadness of My Room Is Crowded and “radio’s original cowgirl” Texas Ruby aka Ruby Owens sings clearly and with a nicely restrained accompaniment on Teardrops And Empty Arms.

Rose Maddox unites country, gospel and folk on The Old Crossroads is Waitin’ and Dim Lights, Thick Smoke (And Loud, Loud Music) by Joe Maphis And Rose Lee are both frank if dated warnings of the pitfalls of living the high life, with the latter a favourite of the late Gram Parsons. The pair also team up on the high domestic melodrama of I’m A Stranger In My Home. A jumping Living, Learning, Trying To Forget by Ray Pressley takes a more positive view and Tennessee Plowboy Eddie (or Eddy) Arnold performs a song that details a kind of melancholic Interflora service in Bouquet Of Roses. The Louvin Brothers end this set suitably with the final word in all senses, I’m Ready To Go Home.

It would be very much a case of stating the bleedin’ obvious to say The Wonderful World Of Depressing Country Music won’t exactly brighten up your day, but even so it is a surprisingly attractive and compulsive listen. The simple stories of heartbreak, loss and fear somehow mostly ring true and impressed me. Despite not being a massive fan of country, I thoroughly enjoyed their hard-earned, delicately imparted wisdom, gained by attending the school of hard knocks alongside honky tonk angels. I came to the conclusion that under the rhinestones, The Wonderful World Of Depressing Country Music is indeed a wonderful collection.