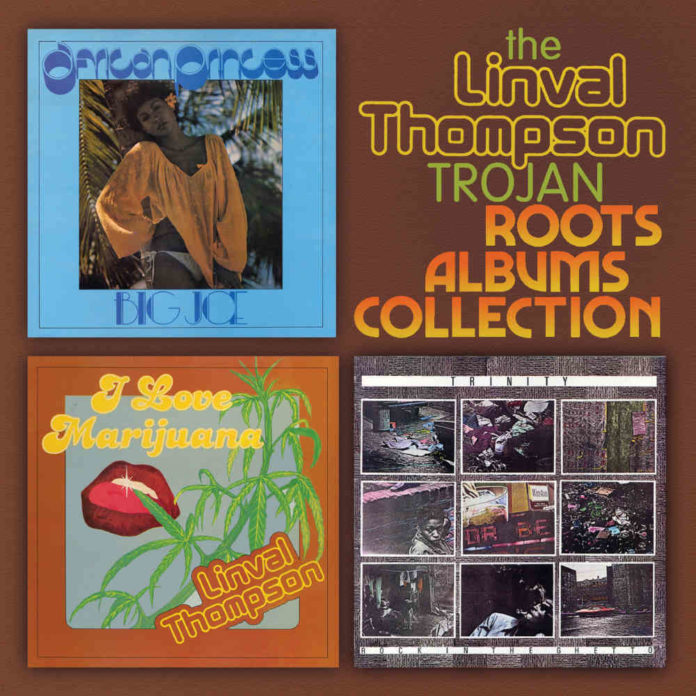 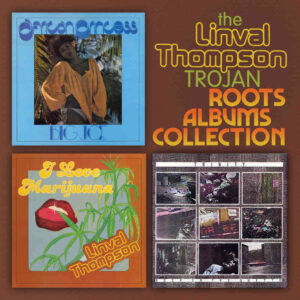 New collection that brings together three late 70s albums produced by Linval Thompson, his own I Love Marijuana, Big Joe’s African Princess and Rock In The Ghetto by Trinity. Also included are 10 bonus cuts…….LTW’s Ian Canty feels the roots vibrations…..

Like a lot of Kingston youth Linval Thompson became enamoured with the burgeoning reggae scene of the late 60s. He did not come from a musical family, but plainly had a talent for singing which he displayed on local sound systems. A move with his family to Queens, New York did nothing to stop the young man’s enthusiasm for music and he managed to do his first recording session in Brooklyn. By 1974 he had returned to Jamaica in order to further his recording career. He put tracks down with Lee Perry and Phil Pratt and his voice was favourably compared to Dennis Brown’s, who at the time was the biggest star in the country.

Coincidence being the odd thing that it is, Johnny Clarke was Thompson’s next door neighbour and friend and he introduced him to Bunny Lee’s studio set up with King Tubby at the controls. Linval recorded his classic debut album Don’t Cut Off Your Dreadlocks in one block for Lee and the title track was a big favourite in Jamaican dancehalls. Reggae had a tough time in the early part of the 70s, but now was coming back strongly with roots material, Rastafarian lyrical concerns allied to a cool but urgent beat.

As the decade worn on Thompson increasingly looked to produce as well as perform, having learnt from the masters. It was a well worn route, but he was more successful than most who took on this dual role at the time. He worked out of Channel One, the studio set up which pretty much carried the torch on from Studio One/Treasure Isle. This facility also had the added advantage of inspired house band the Revolutionaries (including Sly Dunbar, Robbie Shakespeare, Ansel Collins and Ossie Hibbert among others).

The first album of this new set is Linval’s second LP I Love Marijuana, originally released in the UK on the reactivated Trojan label in 1978. The company was liquidated in 1972, but was revived as an off-shoot of Marcel Rodd’s Saga label. Though mainly focussing on reissues of the reggae music that gave the original imprint its golden age, the new Trojan also put out some of the contemporary material that was finding favour with UK-based fans.

This album more or less is classic roots reggae from beginning to end, with flying cymbals, steady rhythms and deeply conscious lyrics. Aside from his productions Thompson was a talent to be reckoned with, boasting a sweet and very cool voice. He also wrote the bulk of the material himself too (and for the Big Joe and Trinity LPs included on this set). I Love Marijuana is the pick of the three albums here for me, wall to wall great playing, tunes and singing.

The title track itself is excellent Rasta reggae, a natural single and the “flying cymbals” sound gets pressed into service on the steady conscious drive of Don’t Push Your Brother. Not To Follow Fashion changes things a bit by going back to the vocal groups stylings of the 60s, but is pulled off with aplomb. A cool proto-lovers’ rock sound dominates Just Another Girl and Starlight skanks along elegantly, with a real dance groove. It’s left to the I Love Marijuana dub of Jamaican Colley (Version) to put the cap on a what is a highly satisfying roots LP.

African Princess by Big Joe is the second platter featured on this disc. Born Joe Spalding, he began his career at the height of DJ/toasting era in the early 1970s. Since his first long player in 1977 Natty Dread A Winner he had issued albums at a fearsome rate, with African Princess in 1978 being his fourth in less than two years.

For me DJ/toasting albums are tricky things – it might appear easy to chat on the mike over a rhythm, but trust me it takes a load of skill to make it not sound like a dub album ruined by someone’s blathering. Big Joe stays just about on the right side of the line here. At times he sounds so comfy you imaging him siting in an armchair reading his words out of a big book a la Jackanory.

Talking of which, touching on nursery rhyme/talk-over stalwart Solomon Grundy doesn’t really help the overall feeling of cosiness, but the record is swimming in smart echo and dub effects and Big Joe’s soulful voice holds forth in an appealing way. It’s scarcely believable he was in his early twenties when he cut this record. Some of the highlights for me were Linval’s I Love Marijuana getting versioned as Smoke Marijuana and on Don’t Fuss And Fight Joe’s voice is nicely layered over the original Linval song.

The final two tracks on disc one are by Trinity, with two twelve inch versions of Follow My Heart and Pope Paul Dead And Gone, which both feature in truncated form on his LP Rock In The Ghetto. They are good takes with extended dub sections. The LP itself starts off disc two of this collection. Wade Brammer, aka Trinity was another DJ who zipped around the island’s producers in the 70s. He made his biggest impact with Three Piece Suit for Joe Gibbs, which formed the basis for Althea and Donna’s smash hit/answer record Uptown Top Ranking.

A contrast to Big Joe’s more laidback style, Trinity near sings his toasts in a more businesslike way and lets the music flow perhaps a little better. A gruffer voice and echoed cries enliven Tell It To Me Mother, stripping back the instrumentation to reveal some natty (sic) guitar work. There’s some great brass on Dangerous Rockers And Ting and Every Trick In The Book employs a mellower style to good effect. Overall this is a pretty good example of 70s toasting and Trinity manages to hold one’s attention throughout.

I love the 8 bonus tracks that finish off this set – vocal tunes cut for the Attack label followed by cool dub versions. It starts out with the 12 inch version of a stone cold roots classic in Mr C.I.D. credited to Barry Brown, or is it actually Bunny Lie Lie (which seems to be the case)? Anyway, this track has an under heavy manners message is cut with a hugely entrancing vocal and impeccable backing. Pat Kelly’s There’s A Song is wonderful – brilliantly sung with an extended dub section even before we get to the instrumental cut Lover’s Style by the Roots Radics band. Every track featured as a bonus here is an ace and they all stand as testament to Linval’s talent and innovation.

Linval Thompson continued with his forward-looking approach and becaming one of the top studio men throughout the dancehall period. He still records and performs to this day. The three albums and associated tracks here catch him near the beginning of his production career, but all the signs are there of the quality that ensured his longevity in reggae circles. He was unquestionably one of the best singer/producer of the roots era and we find him on top form here, particularly on his own LP and the bonus tracks on disc 2. The DJ LPs are good, but his own work was exemplary.