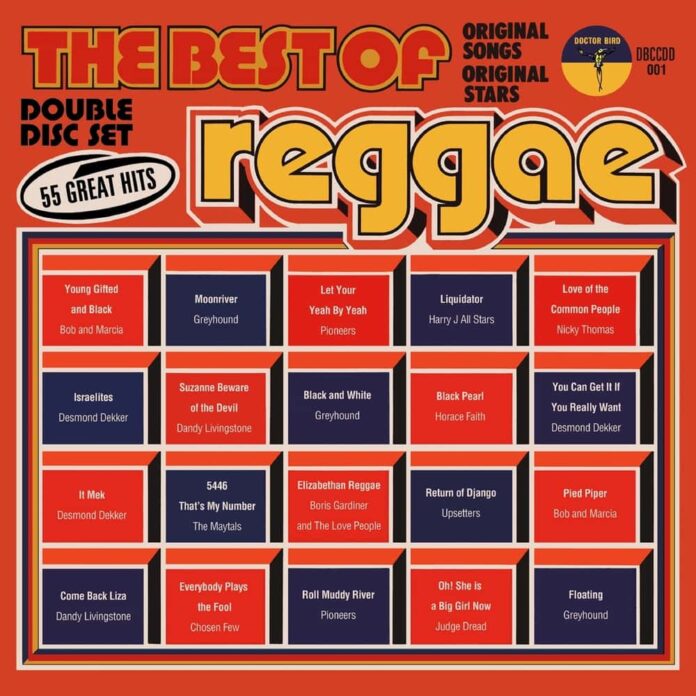 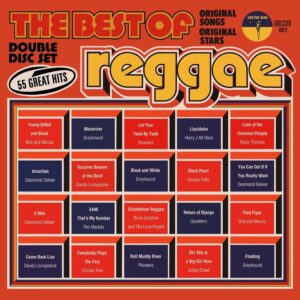 Expanded reissue of the 1973 television advertised double album originally released by Trojan Records, featuring original reggae hits from Desmond Dekker, The Pioneers, Dave And Ansel Collins, Bob & Marcia and many others…Ian Canty goes back to the dawning of a new era

This expanded reissue of The Best Of Reggae represents somewhat of a departure for Doctor Bird, in that this set includes mostly very well known tunes from the late 60s and early 70s, rather than the rarer sounds they tend specialise in. The original double album was launched via TV advertisements in 1973 when it was released by Trojan Records and subsequently become a big seller. Despite its success, it also sort of marked the end of Trojan as a new music powerhouse and the start of its slightly reduced status as mainly an “oldies” label.

Many of the tracks on The Best Of Reggae are so familiar that it is near impossible imagine that there was a time before they existed. From this distance in time it may appear on first sight difficult to gauge the impact they must have made on UK music back then too. However, the energy and verve Israelites by Desmond Dekker is still there for all to hear. It hit the top of UK listings in 1968 and one can easily believe that it helped to really helped establish reggae a genuine musical force. Double Barrel, Love Of The Common People and Young, Gifted And Black also made big splashes on the British charts and many others followed. Something like The Best Of Reggae, which brought together 30 of these records on its original double LP release, represented a real bargain. In addition to these songs filling the floor at skinhead dances, seeds were sown in even younger minds that would mushroom into Two Tone ten years later.

Though the tunes contained on The Best Of Reggae are for the most part pretty well known to anyone who is at all a fan of reggae music in general, there is no denying the quality on show. Bob & Marcia’s storming 1970 version of Nina Simone’s Young, Gifted And Black is a wonderful way to start, seeming to capture the spirit of optimism for the new decade in one hit. The Pioneers’ Let You Yeah Be Yeah is equipped with the UK-added embellishments over the original Jamaican recording, something that was often deemed necessary to softened reggae for the pop charts. Even so, it is a magical mix of a rattling good tune coupled with a barnstorming performance. Harry J All Stars’ Liquidator will always be identified with that first flush of the skinhead/boss reggae boom. This prime organ instrumental remains wonderfully evocative of those times, still as sharp as a pair of two tone tonic sta prest trews.

I can remember singing along to Black And White by Greyhound (formerly The Rudies) in class when I was at primary school. The old folk number’s simple but timely plea for acceptance and tolerance is given a good shot of vigour by the Greyhound treatment and was a big hit for the band who were UK-based. Dandy Livingstone was also operating from these shores and he is featured here with the jumping top twenty single Suzanne Beware The Devil. Desmond Dekker is back to ably version Jimmy Cliff’s You Can Get It If You Really Want It and his brilliant rocksteady skank It Miek also stars. Return To Django by Lee Perry is another fine instrumental that was built to last and Elizabethan Reggae by Boris Gardiner also has a similar touch of class about it.

On the less positive side, the comedy brass and “funny” added voice gimmick does pretty much ruin Bruce Ruffin’s Mad About You, though his cool and soulful Rain benefits from a more sympathetic treatment. From a 2021 standpoint the success of Judge Dread can be a little difficult to comprehend, but he was massively popular both at home in the UK and in Jamaica. This is probably best explained by saying it was his take on “slackness” i.e. the lewd lyrical number which was always a part of JA music from its r&b 1950s roots onwards. His Oh! She Is A Big Girl Now has an undeniably tight groove though.

Clive Crawley and The Cimarons’ cover of the Royal Guardsmen’s US smash Snoopy Versus The Red Baron was released under the moniker The Hotshots. It became a novelty hit in 1973 and aside from an engaging reggae backbeat there isn’t too much to it. Given the criteria of the compilation though, these tracks have to be present. The finale of this disc is much better though, with The Pioneers singing soulfully on I Need Your Sweet Inspiration and it ends with my vote for the best ever British chart topper, Double Barrel by Dave & Ansel Collins.

Disc two of this set begins with three of the best known Jamaican songs from the 1960s. Unsurprisingly, the shadow of Desmond Dekker looms large throughout The Best Of Reggae and 007 is pretty much the perfect rude boy number (his Pickney Girl, a great single from later in the decade and Sing A Little Song, follow on this disc) and Long Shot Kick The Bucket by The Pioneers thrusts the listener forward into 1969’s skinhead reggae boom. The nimble bass of The Maytals’ Monkey Man may have been heard a thousand times, but it is still a real joy to the ears and it completes a nigh on unbeatable opening salvo.

Dave & Ansel Collins’ excellent follow up to Double Barrell Monkey Spanner is present and correct and Owen Gray gives Suffering In The Land a great vocal and irresistible drive. Tony Tribe’s Red Red Wine and Kingston Town by Lord Creator both have an urgency the big selling covers by UB40 lacked and I don’t think I’ll ever tire of hearing Delroy Williams’ cover of Joe South’s country hit Down In The Boondocks, some lovely horns on this too.

John Holt’s lively Reggae From The Ghetto could even be seen as proto-dancehall and Train To Skaville by The Ethiopians will always be a rocksteady classic. The Isley Brothers’ 1973 hit Who’s That Lady is underpinned by a reggae base in its reworking by The Paris Connection and Think About That by Dandy is great fun, very jolly. We get to hear The Melodians’ original version of Rivers Of Babylon before Boney M’s reign of terror stomped all over it and their Sweet Sensation is also a prime cut with a great rhythm. This Is Reggae Music by Zap Pow brings down the curtain with a neat touch of Isaac Hayes’ Shaft about it.

Like the strings and other embellishments that were sometimes added to the original Jamaican recordings here or not, The Best Of Reggae captures the music as it was first heard by many in the UK. For Doctor Bird I suppose the question is, how much is this better than the raft of reggae comps that rattle around the supermarket shelves, trying to catch the casual listener’s eye? Well this set certainly has the ring of authenticity, the period sleeve note and pictures helping to enhance the feeling too. There’s no artist pen pictures, but as we’ve seen above this set scores highly in the sheer amount of vital Jamaican music it contains. For a true beginner, you would have to go a long way to find a better quick catch up of reggae music in its primal form.