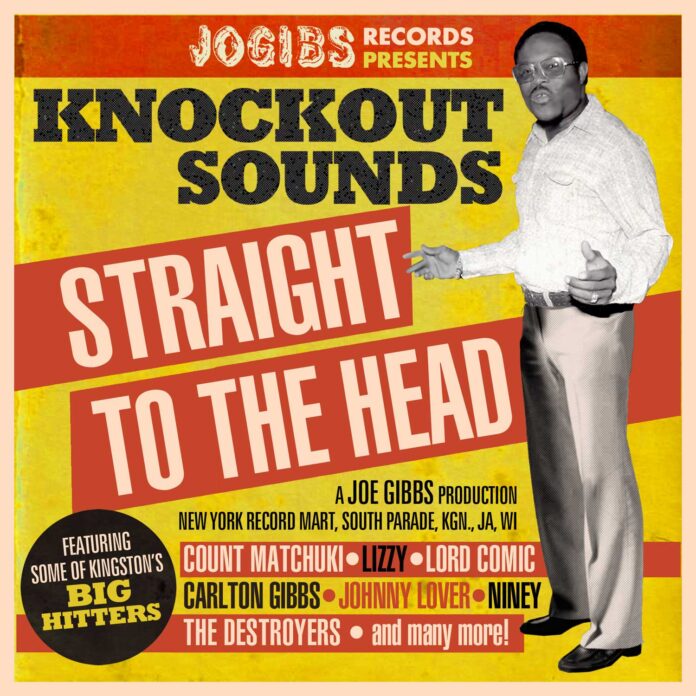 Various – Straight To The Head 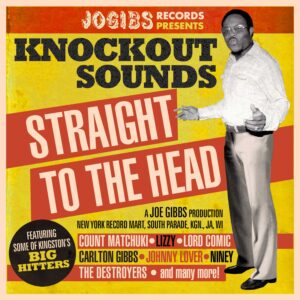 By 1970 Joe Gibbs was well established as one of the Kingston music scene’s prime movers. His Amalgamated organisation had gone from strength to strength and with his new right hand man Niney The Observer replacing Lee Perry, great sounds were sure to come from the studio. Joe had made the transformation from rocksteady to reggae seamlessly and the hits kept coming through a number of acts including a young Errol Dunkley and The Inspirations (their Reggae Fever album is reviewed here). Toasting was just coming to prominence as the 1960s ended and Count Matchuki, Andy Capp and Lord Comic gave Gibbs an ample selection of talent in that area too. This style is very much highlighted on this new set, along with some proto-dub moves.

Gibbs established Amalgamated Records as an outlet for his early productions in the 1960s, but by 1969 he had added the Pressure Beat, Shock and Jogibs imprints. Though the music featured on Straight To The Head that gained a release in the UK came out on a variety of labels Jogibs, which featured a photo of the man himself on some discs, was the focus for his new Jamaican issues.

Straight To The Head cherry picks some 1970 biggies from the Jogibs label, but also provides a look at some less well-known material and artists. It begins with the toasting title track and then one of Joe Gibbs’ regular backing outfits The Destroyers set out the cool saxophone-led Compass, before on the same rhythm Niney and singer Slim Smith team up effectively on Honey No Money. The dancing organ-powered News Flash and News Flash Version again highlight the musical skills of The Destroyers and three piece vocal group The Immortals offer up the mid-paced and slightly mento-tinged Perfect Born Ya . They also crop up later with Red Red Wine (not the Tony Tribe favourite).

Niney Special is another superior organ instro and Busty Brown cuts a dash in a Dave Barker DJ style on Rock The Clock. The mysterious Two Soul Brothers chant in relaxed fashion on the sound effects-enhanced and risqué Pussy Catch A Fire. Lizzy had first made a mark as part of Duke Reid’s Treasure Isle and worked extensively with Dennis Alcapone. He excels here riding the jerking rhythm of Ten Feet Tall expertly. This was an answer record to U Roy’s DJ classic Wear You To The Ball, as it was also known by the title Wear You From The Ball. Lizzy turns up again later with Cornel Campbell for a bouncy and inventive Aquarius and solo again on the feelgood sound of Joy Stick.

Winston Cooper aka Count Matchuki had been toasting at the dances since the 1950s and he is on good form on Movement, which prospers with some golden organ tones and also a very smart if gimmicky Hi-Jacked. Linford Anderson was best known for the classic Pop A Top, cut under his famous Andy Capp alias, which was one of the first chatting records. Here he gives us the similarly-fashioned and very cool Musical Recipe. The fairground organ sound of O Lord by Winston Wright & The Destroyers is a quality boss reggae item and it is good to hear the soulful Cynthia Richards and Al Brown duet United We Stand for a change of emphasis.

Sir Lord Comic was another deejay who had been around since the earliest days of the form, cutting the Ska-ing West single back in 1966. He lectures latecomers to the toasting art on Jack Of My Trade with an assertive, but laidback, authority. The identity of Carlton Gibbs is in question and the percussive Ghost Walk and Seeing Is Believing seems to be his only waxings, with the flipsides to these being Lizzy’s Still Waters Run Deep and a horns-fronted instrumental Ghost Capturer credited to The Joe Gibbs All-Stars, which is also included here.

The sleeve note puts forward the notion Carlton Gibbs might be Charley Ace under a pseudonym. Ace himself teams up with Johnny “Lover” Jones on the tight skank of Head Cup. Jones recorded through the 1970s, after getting his start being backed by The Destroyers. He pilots a DJ version of Straight To The Head and also the spooky spoken word intro and funky beat of Nevada Joe, which brings this set to a conclusion.

A strong DJ/toasting motif comes through on Straight To the Head, which helps it offer a decent picture of the “state of the art” of reggae in 1970. The dub touches foreshadow what was to come in the future and though skinhead/boss reggae is pretty much regarded as a 1969 thing, there are plenty of good dance items in that mode here. I really enjoyed the fact there were a number of tunes I hadn’t come across before and the fact is they are of good quality too. Something that probably really come as too much of a shock on a Joe Gibbs collection, but it was good to hear and confirm it. Straight To The Head offers the listener an invigorating dose of goodtime reggae from the classic era, sounds that remain as fresh as the day they were set down on tape