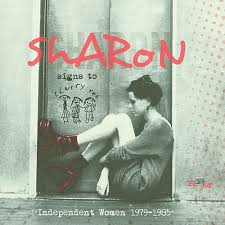 Though it’s stretching things a bit to suggest that women were only tolerated as backing singers before Punk kicked down the doors as I have seen suggested in the past, it is fair to say that the music industry was a pretty sexist beast prior to that time (indeed it’s a moot point to speculate whether that much progress has been made even now, but we’ll leave that debate for another time). Punk’s “anyone can do it” ethos at least freed things up and gave opportunities for female bands/singers to put things out under their own steam and that is precisely what this RPM collection addresses.

It would be easy to get bogged down in gender politics here, but that would be wrong with regard to this set, because when all is said and done this is a collection of the output of normal people with different musical ideas and view-points putting them into practice, usually to great effect. To reaffirm the lack of an agenda the comp leads off with a spoof of the type of “sensitive” female singers Cherry Red were thought to specialise in around this time (combined with a Twinkle “Terry” style death disc) in the title track by the Kamikaze Sex Pilots and Dorothy’s equally snarky, Throbbing Gristle sponsored “I Confess which follows.

The beauty of this project is even though it self-imposes constraints of time and sex, it has a very wide brief musically and this means a delightful muddle of sounds, from Post Punk to Mod to Dub to Jazz Funk and many other hues (even the brief Cowpunk craze of 84 gets exposure in the guises of Helen and the Horns and the Shillelagh Sisters). There’s some familiar names who went on to more mainstream success (Tracey Thorn in the Marine Girls, an early Strawberry Switchblade with an unreleased demo, Ingrid who would front the cool “Southern Freeez” single and even “Letter To Brezhnev” actress Margi Clarke under the pseudonym Margox) and genuine obscurities (The Avocados, the “one Peel session and out ” band TWA Toots with the charming daft “Please Don’t Play A Rainy Night In Georgia” and the slightly “Cats UK” GTs) all of which makes for a beguiling fe-maelstrom of noise.

I’m very pleased to see the Gymslips featured on here, I was a massive fan way back then, their Pop Punk sound mixed with the classic “Girl Gang” groups of the 60s was a veritable Oi! Shangri-las. Though the track on here “Big Sister” is good, I recommend you check out their album “Rockin’ With The Renees” at the first available opportunity. There’s surprisingly few duds: Dawn Chorus And The Blue Tits’ (really DJ Liz Kershaw and friends) version of “Teenage Kicks” is a bit underwhelming despite featuring the O’Neill brothers and I wasn’t a massive of Mari Wilson’s Dusty Springfield pretensions, though I will concede she did have a decent voice. But these are more than made up for by the more unknown quantities where there are a pleasing number of “hits” and even the Paul Weller sponsored duo A Craze perform well with some nice summery pop (you would never know they were on off-shoot of punk trailblazers the Users by the gentle sound offered here).

For instance, the Twinsets “Heartbeat” is crazed, almost swing styled, crammed with nonsense words and it all adds up to a woozy beauty. April and the Fools look back to the Spector “Wall Of Sound” with “You Do”, the B-Girls surf in from the US with “Jealousy” and Dolly Mixture still enchant with the marvelously titled “How Come You’re Such A Big Hit With The Girls, Jane?” which also is possibly the best song title of the entire set. Disc two comes up trumps with one women band the Petticoats free-wheeling punk ramalama “Normal” at least matching the Slits and the Au Pairs for fire, this is a song I’ve personally coveted for ages. Jane Kennaway’s near hit “IOU” is great and it’s good to know she’s still down in Cornwall playing live (I did see her advertised at a pub when I was holidaying down there a few years back, but unfortunately couldn’t make the gig). Amy and the Angels “I Hate Being In Love” yields more lo-fi treasure and the Delmonas “Woa Now” is a sparky, fine bit of 60s garage punk and that’s just the tip of the iceberg.

If “Sharon Signs For Cherry Red” stands for anything, perhaps it is the relentless creativity and invention of female artists that marked out the years it documents as special, proving that women had equally as much to say as the boys and maybe even quirkier ways of saying it. RPM/Cherry Red have come up with another gem here, which even Sharon might like!