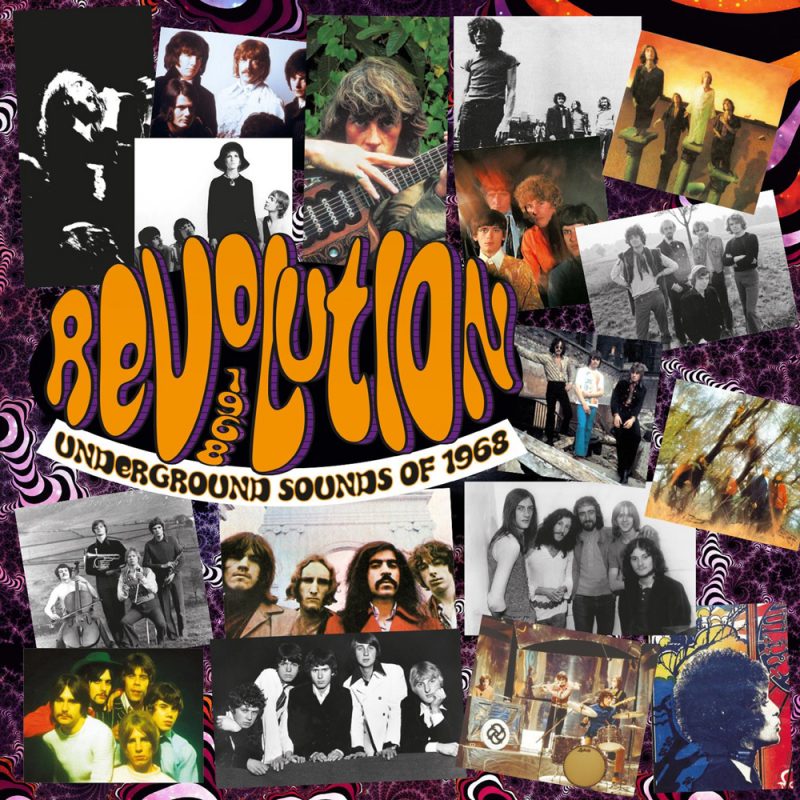 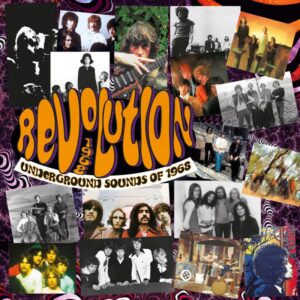 3 disc box set of remastered psychedelia from ’68, showing its spirit of progression and experimentation,  and featuring cult classics from the likes of The Pretty Things, Tomorrow and The Deviants, chart-smashers from Julie Driscoll and Arthur Brown, and a few surprises from names that became giants a decade later, such as Status Quo, and er…. Rod Stewart – but not as we came to know ‘em!

Named after the song by a pre-Yes Steve Howe’s band, Tomorrow, Revolution is all about 1968 – which is obviously not typically known as THE year of psychedelia, but definitely a continuation of it. The box set covers a very large musical spectrum, and it also clears up some misunderstandings and contradictions associated with that whole psychedelic era. It wasn’t all peace & love – Dantalian’s Charriot make that abundantly clear with World War Three, on disc 1. Then there’s the word “underground” – which has a completely different meaning today. Yes, ‘underground’ deals with the non-commercial, but also according to many historians of the 60s, including this box set’s curator, Mark Powell, this was the buzz word that came about in the wake of The Beatles’ Revolver and Sgt Pepper LPs, to describe the whole scene that developed, encompassing art, literature, film and fashion. In present times, it would seem ludicrous to imagine the biggest band in the world influencing the underground, giving innovation and experimentation a good hard kick up the arse and in doing so, redefining pop culture. The Beatles were THE first self-styled band, they broke the doors down for everyone else to go through. No Beatles, no fucking nothing. And anybody who refuses to accept that fact is a fucking idiot: the music fan equivalent of a BrexShitter.

OK, now let’s be nice. There’s something on Revolution for everyone, but that’s not to say everyone’s going to love everything here. There are songs laced with mellotrons, flutes and strings, you’ll also find sitars aplenty, and on the other side of the psych spectrum you’ve got the more rock stuff, which I guess you could call proto-metal. Then you’ve got psych-Mods, The Action, with the brilliant A Saying For Today. While we’re on that subject, here’s a question: when are Genesis not really Genesis? When they sound like The Creation (One Eyed Hound, disc 1). OK, the proper 60s heads will already know these guys were once cool, but for those who don’t, judge them not for their future sins, oh my brothers and sisters, for in 1968, they were good. If you want more proof, a second song by them, That’s Me (disc 3) also proves it. And don’t forget Phil (puke!) Collins was a fan of The Action. One shudders at the very thought. Why did he become so fucking shit later then? Who knows? Who fucking CARES!

We recently wrote about Twink’s brand new single, and he is here three times: firstly as a member of the aforementioned Tomorrow, secondly in his short-lived next project The Aquarian Age (surely 1000 Words in a Cardboard Box is the definitive example of British psychedelic pop, sadly overlooked) and again with The Pretty Things, on the title track of a the band’s psychedelic masterpiece SF Sorrow. The Pretty Things feature here again, also with the non-album single that preceded it, Talkin’ About The Good Times.

Those like me with a life-long dislike of pointless guitar solos, will want to get into a time machine and “have a word” with the likes of Love Sculpture, about the fretboard-wanking crimes committed, which in their case is evident in Sabre Dance. And ironically, there’s none of that demonstrated here from Status Quo, on their song Paradise Flat, which rocks but with a delicate English psychedelic vibe, typical of those times. And thankfully, the song does nothing to give away the denim-clad/heads-down-boogie/three-chord heavy rock Quo of the coming decades. Rod “The Mod” Stewart (though not credited) makes an appearance on Jeff Beck’s Shapes of Things, a slowed down and more stoned reinterpretation of a song by the band he had just left, The Yardbirds.

And here’s a thing: Deep Purple didn’t invent Deep Purple: it was Spooky Tooth. Featured here with the awesome Sunshine Help Me, these guys sadly missed out on the prize later snatched by the likes of Free, despite their input in shaping up the classic British rock sound of the next decade. After Spooky Tooth ended, drummer Mike Kellie (who sadly passed away a couple of years ago) formed The Only Ones in the late 70s, also collecting an impressive session CV along the way that includes George Harrison, Peter Frampton, Johnny Thunders and Joe Cocker. Your humble narrator was fortunate enough to have worked on two albums with this absolute GOD of the drums, toward the end of his life, an honour and a privilege I shall never forget.

You want more proof of variations in style? Try playing the gentle and serene Early Mornings by Barclay James Harvest back to back with the Crazy World of Arthur Brown’s bonkers organ-riff-tastic/hip-shaking Fire…and that’s just for starters. There’s so much more….way more. The pre-King Crimson Giles, Giles and Fripp are here with Suite Number 1, a bizarre piece fusing jazz and classical, a stark contrast to the more basic “it-ain’t-broke-so-don’t-fix-it” blues approach of Traffic on Pearly Queen.

Revolution is a strong statement that backs the fact that psychedelia was always about diversity of sound. It was never a ‘genre’. Fuck ‘genre’. It was always about innovation, and the British artistes of 1968 had it going on. And if you want the history behind the music, you get a detailed book that covers the facts for every artist included here, complete with photos and lovingly put together by the aforementioned compiler, Mark Powell.