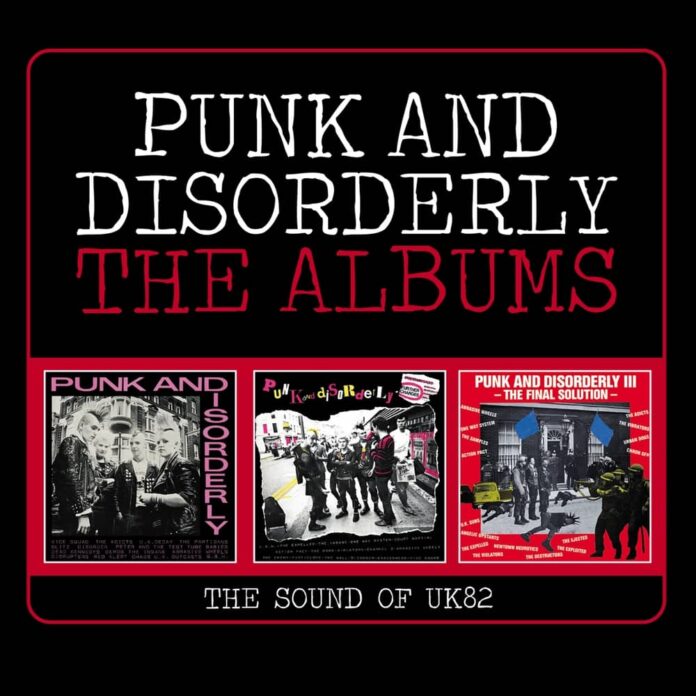 Various – Punk And Disorderly The Albums 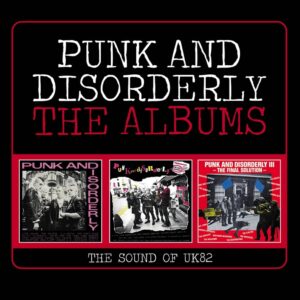 Boxset bringing together the three Punk And Disorderly compilation albums from the early 1980s. This trio of LPs featured many of the leading punk bands of the time, including UK Decay, The Dead Kennedys, Angelic Upstarts, GBH and Newtown Neurotics…Ian Canty enters the riot-torn, time-warp city…

Only a few years after it was pronounced thoroughly dead and gone, Punk slowly but surely edged its way back into the reckoning in the UK at the dawn of the 1980s. The plain fact was that a large number of people still liked the kind of fast and loud music that was at the heart of the original punk explosion. Pushed to the side-lines and ridiculed they may have been during the post punk/new romantic years, but they weren’t going to go away. Adam And The Ants pre-Kings Of The Wild Frontier, The Ruts, SLF and The UK Subs had kept things going through the lean times and Crass had sold thousands upon thousands of their records from 1979 onwards. If the last of the Kings Road chic or anarcho didn’t float your boat, soon there was also a positive upswing from more traditionally-styled punk acts co-existing with new bands forging a fresh hardcore path.

If one can put aside any prejudices about that 1980s punk wave, the first Punk And Disorderly album is a tonne of fun and, on the first hearing after a while at least, appears to all intents and purposes a great compilation LP. Listening through a couple of times does dampens the impact a tad, but far from extinguishes it. I have to admit on further examination that not every contribution is really that good and grant that the inevitable nostalgia issue may have come into play for me a little on that initial hearing.

Nevertheless, even if some of the tunes are reveal themselves as not being truly out of the top drawer, the one thing all have in common is that they are all spirited and convincing. Vice Squad’s Last Rockers is as good a way as any to start, effectively drawing a line in the sand in what feels now in 2021 a truly anthemic way. If the fact that Straight Jacket by The Adicts was released on Dining Out Records at the end of in 1979 put it as close to the the original summer of punk as the brave new world of 1982, being caught before their clockwork orange obsession took over works well for them. Like many of the bands featured here, their contribution shows them in the best light.

NI’s Outcasts belonged to that earlier wave too, but Mania comes with a hefty dose of the necessary thump proving that they still had plenty left in the tank. Some of the bands here take the basic nature of their recording situations and turn them into an asset, like bracing clatter of Last Day by The Insane. Others use rough sound in a way that is almost impressionistic. Disorder’s Complete Disorder could almost be an early PIL demo, but with a UK hardcore surge and lacking Wobble’s distinctive bass. Some don’t fare as well on further analysis, with The Disrupters’ Young Offender being a bit of a plod to be frank and while Four Minute Warning by Chaos UK may be a textbook example of UK82 hardcore, it really doesn’t do that much to stand out.

I’m less crazy about the bonus tracks on this disc. Discharge’s State Violence/State Control does feel like it belongs here and The Defects’ very good Dance Til You Drop is certainly from the right timeframe. However the choice of Punk Rocker, a 1983 single by Special Duties, rather than their 1981 debut Violent Society is just plain odd. It would have made some sort of sense on the third disc, but here it appears well out of place. I have to say the bonuses let the side down on this set. They seem just bolted on with little forethought, despite some of the actual songs being pretty good.

The success of the first album and the continued good performance of UK punk bands in the indie chart naturally resulted in a follow up collection. Punk & Disorderly Further Charges isn’t quite the equal of its predecessor, but does manage to ferret out a fair amount of pretty arresting contributions. Some bands return to the series – The Insane sound a totally different proposition on an incendiary El Salvador and Vicious Circle by The Abrasive Wheels is another more than fair tuneful hardcore tear-up.

The main points of interest here for me are the newcomers though. The Violators were for me the band that ought to have made it big out of the scene. Listening to the imagination and verve of Gangland I feel they easily stack up against most of the first wave UK punk’s contenders. The Wall, another band with roots right back to the original punk explosion, contribute an atmospheric Hobby For A Day and The Dark weave a magical spell with The Masque.

At this distance, Erazerhead’s Shellshock feels like it neatly recasts The Ramones for an eighties landscape rather than being a direct copy, as some tended to view them at the time. On the less positive side, Court Martial are like a Not The Nine O’Clock News parody on Gotta Get Out, Riot/Clone’s Death To Humanity is a bog-standard hardcore gallop and though One Way System give Stab The Judge a meaty musical backing, the song itself is a wee bit daft.

Those misgivings aside, Channel 3’s I’ve Got A Gun still comes over as a turbocharged firecracker of a tune and Action Pact were a gem of a band that gave the overwhelmingly male UK82 a very welcome female perspective. They are represented here by their early classic London Bouncers. The Enemy would get better as they went along, but their Fallen Hero is still pretty good and Leeds band The Expelled’s Dreaming is a solid pounding number and a smart step away from being looked on as just a northern version of Vice Squad.

For me again on this disc the bugbear is that three of bonuses come from 1983 – Further Charges was released in 1982 and the idea was to capture the sound of UK punk from the months beforehand. Dead Wretched’s busy No Hope For Anyone is an extra on disc three Punk & Disorderly III The Final Solution, but I feel would have more naturally sat on this platter or even the first. But I’d have to have a harder heart than I currently possess to not to give a thumbs up to Dead Man’s Shadow’s cool and inventive Toleration Street or the knotty energy of No Sign Of Life by Merseyside’s Instant Agony. Last Rites’ snotty shoutalong throwback to 1970s punk We Don’t Care is also fun and The Varukers sound like The UK Subs’ leery little brothers on Don’t Wanna Be A Victim.

The last Punk & Disorderly collection Punk & Disorderly III The Final Solution arrived in 1983, just as the UK punk scene was reaching saturation point. Even so, this was a spot-on survey of the best of what was still happening. After the typically crunchy Burn ‘Em Down by The Abrasive Wheels, we get an urgent Give Us A Future by One Way System and The Newtown Neurotics’ timeless anthem Kick Out The Tories.

It is ironic that The UK Subs’ best single Police State came out just after their UK pop chart career had ended. This number has got the lot including a great guitar solo and Charlie Harper along with Knox of The Vibrators weigh in with another beaty outing New Barbarians as The Urban Dogs. Fellow elder statesmen of punk The Angelic Upstarts got a second wind after their disastrous Still From The Heart LP on the excellent Woman In Disguise and Action Pact score again with Suicide Bag, a really apt lyric at a time when UK punk was plagued by the glue sniffing craze.

It is so sad that The Violators were on the verge of splitting after their brilliant Summer Of ’81 single and The Samples’ Dead Hero also oozes untapped potential. There are a few efforts on here that haven’t aged well (for starters The Destructors’ Jailbait and Computers Don’t Blunder by The Exploited), but Chron Gen’s Outlaw single is a true unheralded classic and I struggled not to grin when hearing the minimalist fun of The Ejected’s Have You Got 10p?. Again on this final disc ends with a mixed bag of extras. It was good to hear Major Accident’s melodic Fight To Win and Some Day by External Menace again though.

As a cheap and cheerful set Punk And Disorderly – The Albums work pretty well. The first LP was a landmark compilation that had an impact both at home and abroad and one can still feel how well it captured the music of the time today. This LP fully deserves to be heard again in the correct running order. The other two collections didn’t have quite the same clout, but what they do possess is a reasonable dollop of stirring material. Yes, there are some unusual choices among the bonuses – I couldn’t help but wish they had made this a four disc set and kept the original LPs separate, with these extra odds and sods presented on a separate disc. This is a minor quibble though, as they are easily ignored. In conclusion, if you are coming to British punk of the early 1980s from a standing start, this 3CD does a very reasonable job of setting the scene and a lot of it still sounds just the ticket.