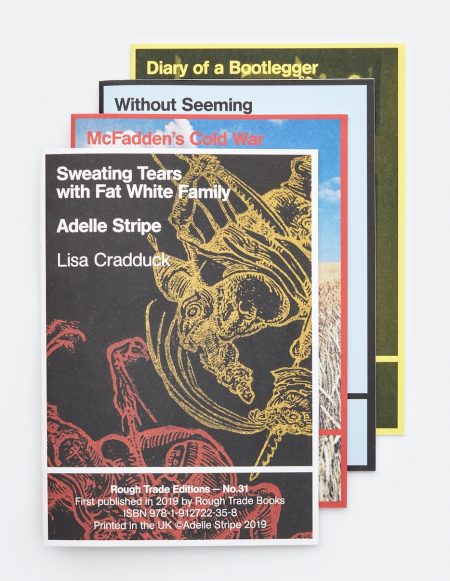 We all know Rough Trade for their trailblazing label, and brilliant record stores, but in recent times they have branched out into publishing short pamphlets from a range of top-class writers and creatives. 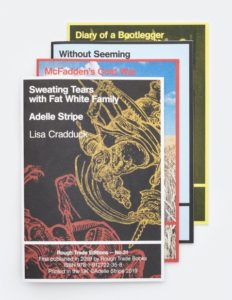 They are publishing the pamphlets round a series of themes like ‘Naughty’ which features Cold War Steve, Max Sydney Smith, Jonny Banger and Adelle Stripe & Lisa Cradduck.

The pick of the bunch is Adelle Stripe’s Sweating Tears with Fat White Family, based on brutally raw interviews with the band’s warring creative nexus, singer Lias Saoudi and lead guitarist Saul Adamczewski. On one level they seem to be point and shoot interviews, but the strength of this visceral pamphlet is Stripe has really earned the trust of these intelligent, but troubled, artists.

That means the pair of them talk really, really openly about their traumatic childhoods, drug addiction, shitty jobs and even their slightly sad sex lives.  But what is most fascinating is how those experiences inform their relationships as musicians in probably our most important contemporary band. Printmaker Lisa Craddock demonic engravings add to the rawness.

Stripe made her name writing about another tortured working class genius Andrea Dunbar in her debut novel, Black Teeth and a Brilliant Smile.  She brings that experience to digging into the psyches of these two who know they are much less without each other but can’t help winding each other up to the point it all too often comes to blows.  Stripe doesn’t let them off the hook as she forensically examines through their own words the creative and personal tensions that fuel the truly great bands, but also inevitably lead to their downfall. Maybe she could next turn her attention to Morrissey and Marr.

Like all really great ideas, McFadden’s Cold War is brilliantly simple. Cold War Steve – aka Christopher Spencer – uses his iPad or iPhone to insert various stills of Eastender legend Steve McFadden into iconic photos of the Cold War between Russia and the USA.

It shouldn’t work, but it does, as we get hilarious juxtapositions of a pissed Eastender leaning on the Berlin wall as it’s being built, a blooded Phil Mitchell in the room as Gorbachev and Reagan clink cans of cheap beer, Steve swigging vodka in a MiG jet and him taking a nap between Thatcher and Reagan.

The images themselves are funny, but they are also subtly mock our new globalised world ruled by an orange moron and an old school Stalinist in the Kremlin. Plus ca change.

Max Sydney Smith’s melancholic Without Seeming to Care at All offers a series of vignettes of life in an island pub staffed by artists all trying – and often failing – to make it in their chosen discipline.  You get a sense that Smith himself might have been through some of the experiences he recounts, but he certainly has a keen eye for the foibles of artists stuck behind a tatty bar.

Their mantra is ‘do not care’, but they do in their own fucked up ways, and Smith beautifully draws out in a few sparse paragraphs their motivations, failings and who they are really are behind the masks. You end up wanting to know much more about these misfits existing in a makeshift dysfunctional ‘family’ and there is most definitely a novel in this pamphlet

The only dud in this series is Jonny Banger’s disjointed, and pointless, Diary of a Bootlegger which is pure Nathan Barley, and let’s leave it at that.

Rough Trade have been a key player on the British music scene for decades. and these pamphlets from top class creatives with something to say suggest they could play a similar role in leftfield publishing.

You can buy the full Naughty set for £24 here: