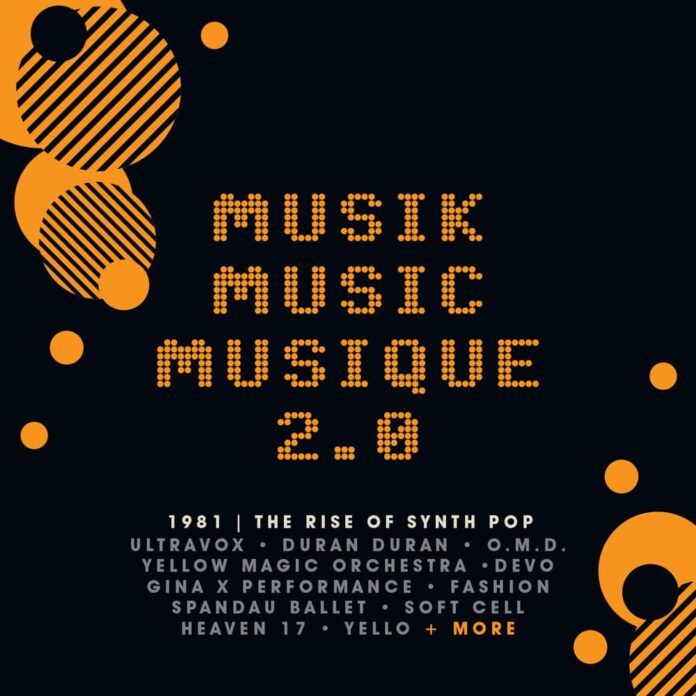 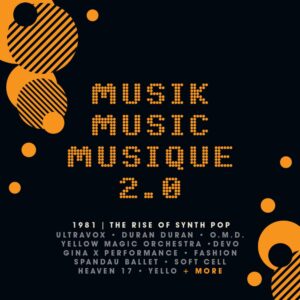 Last year’s inaugural Musik, Music, Musique set was a real pick ‘n’ mix selection of electronica fun (read the review of it here), so it was always on the cards there would be additional entries in the future. This run of compilations promises to be a lighter, more pop side of the coin to the more out there Close To the Noise Floor sets of recent years (reviewed here, here and here). The second Musik, Music Musique edition skirts close to that previous series with some underground electro names cropping up, but there always remains a “pop” focus.

If anything the contrast between inspired, the hits and pretty godawful is even more stark this time around. For instance on disc one Richard Bone’s obscure electropunk delight Alien Girl is right next to the risible UK number one Japanese Boy by Aneka and new romantic teen heartthrobs Duran Duran abut The Sound’s experimental alter ego Second Layer. Later their London counterparts Spandau Ballet sits next to Fresh Records’ duo Beasts In Cages’ chilled Sandcastles, the b side of a cover of Alvin Stardust’s My Coo Ca Choo. To ram home the point, on disc three the chart conquering Midge Ure-era Ultravox are positioned directly before The Limit’s cool Ok Go, a Paul Edgley from Drinking Electricity solo project.

Musik, Music, Musique 2.0 kicks off with Heaven 17’s mighty debut single (We Don’t Need This) Fascist Groove Thing, possibly more relevant today than when it was first released. It sounds remarkably fresh and although its genuine attack and sussed attitude was ultimately not really followed up on, this is still a bracing call to arms. The perfect match between bedroom angst and ear candy that is Soft Cell’s Frustration follows. I make no bones about being a massive Devo fan and their Through Being Cool, the third track featured, is as arch and magnificent as one might suspect. It was accompanied, if memory serves me correctly, by a video that is a riot of pompadour hairpieces, youthful smart patrols and vaporized joggers.

Immediately before the Aneka “unpleasantness” comes Dramatis, Gary Numan’s backing outfit. They pull out an ace in Lady DJ, the flipside of their 1981 debut single. I’ve a lot of time for Tony Mansfield’s experiments as New Musik and they are represented here by Twelfth House, which is a canny and totally loveable pop confection. I’ll also give A Flock Of Seagulls their due. Before they became shorthand for wacky 1980s fashions, they were up for pumping out the odd bracing synth missive like their tune here, the relentless Talking. The Compact Organization’s Virna Lindt may have been regarded as their second banana after Mari Wilson, but her work was always more interesting to me. Young And Hip sparkles brightly, is madly unique and pretty darn danceable into the bargain.

The Passage impress as always with the percussive battering of Taboos and Second Layer’s In Bits adds heartbeat rhythm to a masterclass in squalling electro rock alienation. Wanderlust by The Fallout Club bounces along in a dramatic and catchy manner. This band included soon to be chart success/pop boffin Thomas Dolby and The Soft Boys’ Matthew Seligman in their line up. Analysis had strong links to the great Drinking Electricity, who feature themselves on disc two of this set. David Rome was a member of both bands, but Analysis’ own Surface Tension has neat instrumental synth jabs that form a good way to see out this first disc.

Yellow Magic Orchestra have a fair claim to being one synth pop’s pioneers and this is bolstered by their ultra-cool, electro-clanking groove Cue. No GDM (Dedicated To Quentin Crisp) by Gina X Performance packs a real punch and the edgy guitar and electric warps on a fine Random Particles shows how worthy the aforementioned Drinking Electricity are of anyone’s time.

After this stellar beginning, it has to be said that from here this disc does nosedive a bit, with some pretty well-worn and/or hoary efforts showing up. Having said that Those French Girls’ Close-Up has a bright, scathing guitar line that marks it out from the crowd and the sparseness of Sleep by US band Voice Farm shows that restraint with electronics sometimes pays true dividends. Japan’s The Art Of Parties remains very listenable despite a host of 1980s production quirks being applied to it and Move On by Birmingham’s Fashion is a convincing and stomping slab of electrofunk. However the disc ends with the pretty woeful I Can’t Hold On (Original Mix) by Natasha “Iko Iko” England. She and her husband apparently founded Rockney Records for Chas & Dave’s recordings, but that doesn’t make this effort any more palatable.

Happily disc number three of Musik, Music, Musique 2.0 does represent an upturn. Chris & Cosey’s hypnotic This Is Me is a good start. Nevermore, from Schleimer K’s self-titled 1981 debut album, is suitably eerie and dramatic too and Naked Lunch, who are still recording to this day after a 2010 reformation, give us the strident lo-fi thud of Slipping Again. This number was on the other side of their Rabies single. AK-47 follow in similar fashion on Stop! Dance!. They were the brainchild of Simon Leonard, who also worked as File Under Pop.

John Foxx brings his usual touch of class to actually quite rocky You Were There from his The Garden LP and Mansfield’s B-Movie, who always seemed on the verge of a breakthrough without ever quite managing it, yield a spiky post punk goodie in Nowhere Girl. A duo of Sue Porter and Trevor Sewell that went by the name Erogenous Zones lasted just for one single, the top side of which Say It’s Not So is featured here. Its jaunty very commercial pop sound stays just about on the right side of naff.

Hailing from Liverpool come twosome Faction, who provide the wistful and alluring Wrong Again. It was released on single by the city’s famous Inevitable label, home of Wah! Heat, in 1981. Cherry Red mainstays Eyeless In Gaza close out the set with The Eyes Of Beautiful Losers, which comes complete with a real sense of elegant grandeur. This acted as a handy reminder for me to check in with this unique duo’s back catalogue at the first available opportunity.

I suppose that in bringing together the various strands of early 1980s UK synth pop that had pretentions towards the charts, Musik, Music, Musique 2.0 does do a thorough job. After all, not everyone using the new technology could be achingly hip and some were bound to get things a bit skewed. I personally could have done without most of the “bigger” hits and acts here – there is a far more interesting story that is told by the lesser lights I feel and including a few more of them would have made things even better from my viewpoint. Nevertheless for the main part of its running time Musik, Music, Musique 2.0 is a fairly engrossing survey into the 1980s electropop machine sound, captured in the earlier stages of its development.