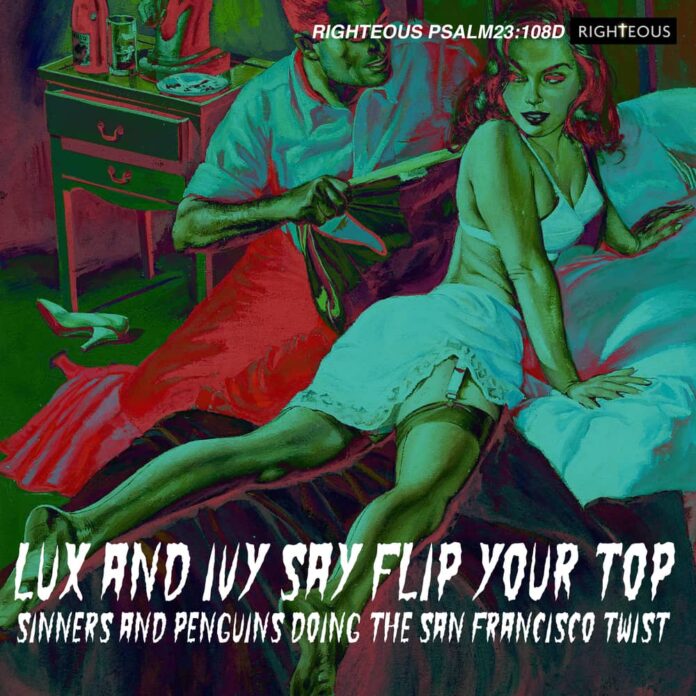 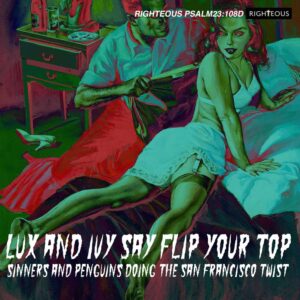 Cherry Red imprint Righteous kick off 2022 in fine style with another 2CD collection of unhinged tunes drawn from the bowels of the late 50’s 7” singles explosion; fifty tracks from an era when anything went; rabble rousers singing about the bomb, jail time, hot rods and more all neatly bundled under umbrella of Cramps founders Lux & Ivy’s legendary record collection.
All the tracks have been remastered for this release, which is accompanied by sleeve notes courtesy of MOJO magazines Davie Henderson.

The Egyptians open proceedings with Flipping Their Top, the B-Side to their only release entitled That’s Alright which came out via Danae Records in the late 50’s, this was the labels sole release; as such almost nothing is known about the band (or label); though this rousing R&B, soul and Doo Wop vocal belter suggests they really should have released more material; to secure a decent original copy of this will set you back at least £60 making this 2CD set an absolute bargain.

Mel Dorsey contributes the wonderfully titled Annie Miss Fanny which appears to have been scheduled for release in 1959 via California based Black Jack Records, though an official release seems not to have happened, with only promo copies existing; another real shame as this honking sax led rockabilly stomper complete with a great bass line really highlights Dorsey’ strong vocal style, similarly on Little Lil which is included on Disc Two

Just who would call their band The Flock Rocker? Well, I guess if your other band was called Gabriel & His Trumpet then it seemed reasonable, or at least it did to Mitch Hearns who is responsible for The Chinese Rock And Roll, a semi-instrumental rocker complete with some frantic drumming and a great guitar lead only to be tarnished by a gong and unintelligible vocal ramblings which I guess we are supposed to take for Chinese! In the current climate, if released now this one would be condemned as racist, but as a snapshot of a previous time it’s a gem! 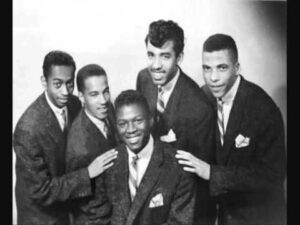 The Charms maintain the Far East vibe with a cover Ling Ting Tong, a song originally written by Mable Godwin and released by The Five Keys in 1954, this mock Chinese R&B number did well for Godwin as it was covered by Prince Buster, Bobby Knox and Cramps inspiration Wolfman Jack, as well as Bill Haley; The Charms took their version into the US charts which secured them support slots with the likes of Big Joe Turner before the group split in two and ended in a court room battle.

Pat Hare deserves more recognition; initially a member of Howlin’ Wolf’s band his early 50’s distorted guitar style went onto influence the blues, rockabilly and frankly everything else ever since. His courtroom confessional I’m Gonna Murder My Baby (Cheatin’ And Lyin’ Blues) captures his style perfectly, the drawled vocals coupled with that primitive muddy twang – again, another artist who really should have been able to release more material.

Eugene Fox was a Saxophonist and singer from Mississippi who at some point played with Ike Turner’s Kings Of Rhythm. Sinners Dream was his only sole release courtesy of Checker Records in 1954, this one is genuinely demented; a fractured slowed down blues guitar (courtesy of Ike Turner) over which Eugene pleads for redemption from the clutches of The Devil.
Chris Cerf is a U.S. author, composer-lyricist, voice actor, record and TV producer perhaps best known for his musical contributions to Sesame Street. He wrote Fallout Filly when co-editing the Harvard Lampoon, releasing it as the flipside to The Penguin in 1961 under the catchy name Chris Cerf And The Harvard Lampoon Tabernacle Choir having been recorded on the spot in Vibraphonic Stratophidelity-500… make of that what you will, but should you need more convincing he also offers up The Penguin on the second disc.
Another likely to be termed blatantly offensive is the genius Too Big For Her Bikini from Gerry Granahan with the Hutch Davie Orchestra, a vocal rock & pop number lamenting a poor girls attempts to squeeze into her bikini having eaten too many cakes and sugar laden goodies that Caprice Records put out in 1961. Granahan was prolific between 1958-68 recording under his own name and as Dicky Doo & The Don’ts, and The Fireflies.

Junior Wells remains one of the most respected artists to be included in this collection, he has played alongside The Rolling Stones, Buddy Guy, Bonnie Rait, and Van Morrison, here he contributes the romping Lovey Dovey Lovey One, a strong vocal riding a solid rhythm and a neat twanging lead guitar.

Disc Two is equally crammed with lost characters from the outer edges of the music business, Aston Martin & The Moon Discs makes efforts via the moniker to exude both class and future thinking, here with their sole 1961 release that basically copies The Shadows in both style and ability, Bobby Charles recorded the boisterous Take It Easy Greasy for Chess back in 1956, this one roars along driven by a flaming sax and a suffering piano, Frankie Ervin keeps the pace flying with Wilhelmina, a B-Side from 1959 having initially mad his name with the Three Blazers and Oscar Moore’s Combo before going out on his own. 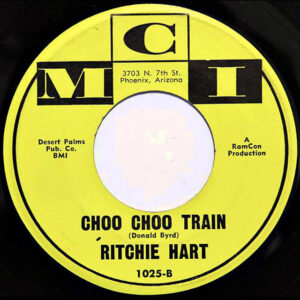 Ritchie Hart reversed this order, initially releasing tracks such as I’m Hypnotized for Felsted in 1959, here though he offers up the effects heavy Choo Choo Train, essentially the same song but with the inevitable train noises!!

Myron Lee belts out the whoopin and hollering Aw C’mon Baby, looking him up he is still with us; check out his website for a vast selection of his material including the gem Homicide. We get two tracks from the legendary Warren Smith, Cave In and Miss Froggie whose track Uranium Rock was covered by The Cramps, and was integral to their earlier live set, and its great to see the classic Turn It Off from Dean & Jean being included.

Others to look out for include The Moonlighters Broken Heart, a rollicking teen romance tragedy and Ernest Tucker with Cowboy Hop that was the flipside of 1959 What’s The Matter Claudy release, a real R & B rock and roll stomper, the catchy named Harold Jackson and the Jackson Brothers had clearly heard the Ritchie Hart track as The Freedom Riders delves deep into the railwayana effects territory on this blues infused stomper, sadly no-one else caught that particular train as this was their solitary release.

The entire collection closes with Tommy Biener, Wendy & The Schoolgirls performing the optimistically titled The Top 40; this one got nowhere near, and is all the better for it, Wendy and her teenage friends backing Tommy on this bouncy rock and roll number which feature a fantastic burst of distorted rhythm guitar.

Righteous have compiled another collection of the lost, the confused and the simply crazy, and for that we should continue to be thankful.