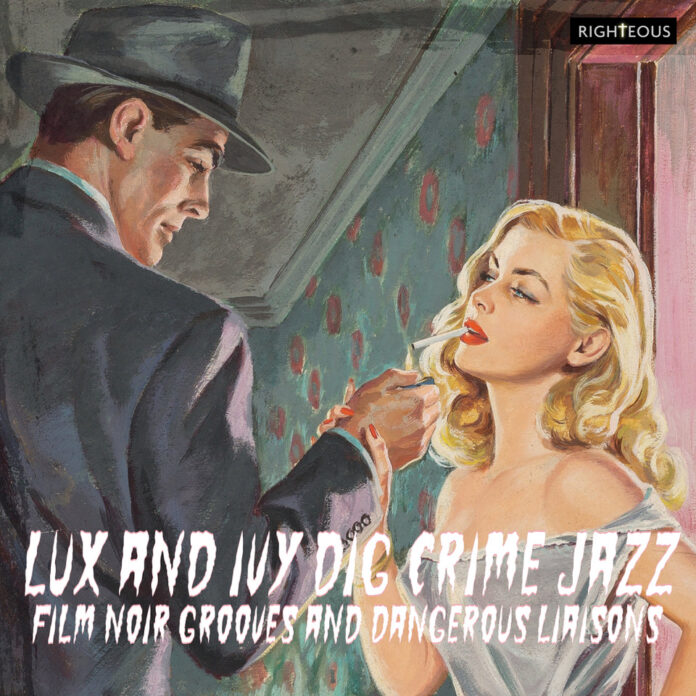 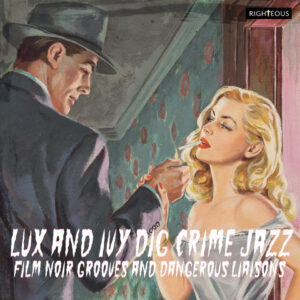 Subtitled Film Noir Groove And Dangerous Liaisons, this edition in the Lux And Ivy series features cool jazz themes from 1950s TV and films that may have played a role in The Cramps’ trash aesthetic. Henry Mancini, Elmer Bernstein and Miles Davis figure among the contributors. Ian Canty tries vainly to make it out of Dodge with the cash…

This new collection appears to put forward the argument that American cinema and television played as big a role in the development of The Cramps’ attitude as raucous 1950s and 1960s music. Lux And Ivy Dig Crime Jazz looks at the music from such media, deviating from the usual horror-obsessed rock & roll, wild blues and weird hillbilly country. Though jazz might well be as far away as possible from the sound Interior and Poison Ivy perfected, it did form the backbone of the musical accompaniment to the film noirs and TV crime shows that they treasured. The tension and drama these works contained may have had some underlying effect on The Cramps’ music, so perhaps a set like this is not quite as off the wall as one might first suspect.

In truth though the link is a bit flimsy, but thankfully that isn’t what attracted me to this compilation. The thought of swinging, action-packed jazz recordings I find tantalising and there is oodles of the stuff here. To begin with, the general public probably know Henry Mancini best for The Pink Panther theme tune, but beyond that is a massive archive of top rate work. Touch Of Evil from the Orson Welles flick is his first track here and it skilfully uses beatnik drums as the anchor for the strings and horns to do the business. His Son Of Raunchy is another from Touch Of Evil and is a more of bluesy rock & roll stomp. As a contrast, the smooth piano and vibes jazz of Lightly is simply delightful.

Warren Barker may be substantially less famous, but his Harlem Nocturne sneaks along sinuously through the streets of the big city with vibes lighting the way, whilst an oh so mournful trombone sways drunkenly along. The Man With The Golden Arm, which featured an electrifying performance from Frank Sinatra as a drug-addicted jazz drummer, is these days quite a well-know work, but this doesn’t make the Elmer Bernstein theme any less cool, dramatic or bracing. As far as film tunes go, it is right up there. Bernstein’s MacDougal Street Special, from Johnny Staccato is less visceral, but it is a very busy and likeable jazz tune with some nice guitar frills. Also coming from the same film is the excellent big band sound of Staccato’s Theme.

Floozie by Alex North is imbued with a real sense of impending doom and sleazy grind and Kai Winding’s ominous Experiment In Terror works very well, with some fine keyboards helping to rack up the tension. On television, Dragnet, created by its star Jack Webb who took the role straight-talking Joe Friday, was one of the ratings winners of the 1950s in the US. Ray Anthony’s theme music, written by Walter Schumann, created the right ultra-serious note to soundtrack the seedy side of city life in one of the first police procedural shows.

Peter Gunn came to television later in the 1950s, but the spectacular, brassy and bass sound of the theme was another winner from Henry Mancini, who later provides a low-key Goofin’ At The Coffee House, Odd Ball and the delicate late night beauty of A Quite Gass from the same source. Frankie Ortega and Sy Oliver came up with After Sunset, a moving and evocative piece, for Peter Gunn too and from 77 Sunset Strip, with its hip-talking teen idol Kookie, we have their zesty Lady In Distress.

Going back to film, Chico Hamilton’s furious Jazz Club from the Tony Curtis movie Sweet Smell Of Success has the voice action played out over the thumping beat. The prolific Leith Steven contributes Daddy Long Legs from Don Siegel’s Private Hell 36 and Miles Davis’ Generique from Louis Malle’s thriller Ascenseur pour l’échafaud aka Elevator To the Gallows is as cool and downbeat as one might speculate. Gerry Mulligan provides the full stop to this set with the appropriately named, short but menacing groove of End Title from Robert Wise’s gritty I Want To Live.

Finally, there are a few deviations from TV and film themes present. Burt Bacharach co-wrote Paul Hampton’s weird Two Hour Honeymoon, which starts with a car crash and continues from the lyrical viewpoint of the accident victim. Despite not hailing from the screen, this is probably where the Lux And Ivy link is most profound. Bobby Troup’s original version of (Get Your Kicks On) Route 66 also may seem a little out of place, but as it is a momentous piece of rhythm and blues, it would be churlish to complain.

Ignoring the slightly tenuous Lux And Ivy concept for a moment, this is a collection of high quality of musical selections taken from US film and television’s heyday. The invigorating, blazing jazz sounds that are on Lux And Ivy Dig Crime Jazz easily stand up on their own. For anyone looks for something far away from the norm, this collection represents a refreshing and stylish glance backwards. I enjoyed it very much, a prime set of truly atmospheric sound.