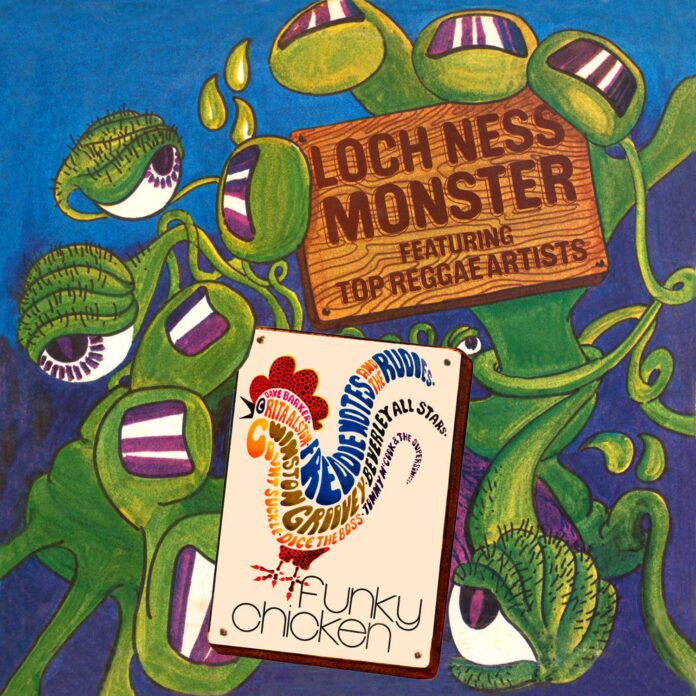 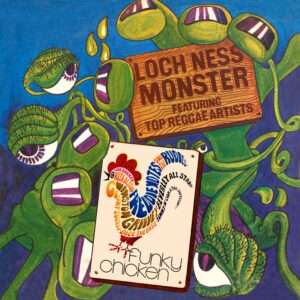 Reissue of two popular collections that first saw the light of day during the skinhead/boss reggae era on the Trojan label. Both are bolstered by many bonus efforts and artists contributing include The Upsetters, Winston Groovy and King Horror, who sometimes was Laurel Aitken. The latter’s work is strongly represented throughout. Ian Canty cuts a rug whilst keeping an eye on the coastline for Nessy…

I was really pleased when I heard the album Loch Ness Monster was being reissued again, having missed out on it due to lack of funds when I saw it in a second-hand shop in the early 1980s and also some years later when an earlier CD edition also slipped through my fingers. The oddball sleeve design and superior track listing promised a skinhead jamboree like none other, for all the world looking like it offered prime conditions for a moonstomp. I’ve often over the past few decades rued the day that I did sacrifice not something else in order to get hold of it. Funky Chicken, another various artists set, arrived not too much later after Loch Ness Monster in 1970 and drew on a similar talent pool. The pair were big sellers for the famous Trojan UK imprint too.

The concept behind the LP linked the themes of horror and sex. This in a way shadowed the successes of previous sets that came with a spaghetti western flavour. Young skinheads, who made up the core of reggae’s UK adoptees, had responded well to these tough guy records, so I suppose Trojan may have thought those fans might also go for the same trick with other X certificate movie standbys. Loch Ness Monster & Funky Reggae also highlights the UK-based reggae productions that may have been looked down on by Kingston music insiders as second rate, but invariably hit the spot in the dancehalls of Britain.

The Rudies, who included Danny Smith and Sonny Binns, were more often than not on hand in the studio to add their backing group talents to the British-based voices. Soon they would become Greyhound and score a big hit in their own right with a version of the old folk tune Black And White. One also must acknowledge the one man music industry otherwise known as the great Laurel Aitken, who features in a variety of guises here.

Loch Ness Monster suffers a bit by not being able to follow its original running order, with the Des (Bryan) All-Stars and Band Of Mercy & Salvation tracks not present. This new set starts logically enough with King Horror’s title track, where a trombone jousts with Everil Davey’s gruff vocal hectoring so well it simply became an instant skinhead dancefloor classic. Cutting Blade, which turns up later on the LP by the same artist, isn’t far behind in those stakes either.

Laurel Aitken helmed the session and donned the King Horror persona himself (probably) on a very blunt effort The Hole and Frankenstein, which appears among the bonuses on disc 1 here. Nora Dean’s ribald Barbwire pops up (ooer!) next and she is also heard on the suggestive The Same Thing You Gave Daddy as one of the extras appended to the album. An aggregation of Lee Perry’s studio outfit The Upsetters shows up well with a clutch of high quality and very danceable semi-instrumentals in Man From M.I.5, the risqué toast of Self Control and Vampire.

The truncated Loch Ness Monster album is curtailed with the chiding back and forth between Girlie & Jomo on a piece called African Meeting and a cool dance tune in Prince Of Darkness by King Horror, with KH portrayed this time around by Lloyd Campbell. Girlie, the original rude girl, was memorably Laurel Aitken’s foil on the fabulous Scandal In A Brixton Market album.

Among the 19 bonus tracks on this disc we have well-known offerings like Lloyd Charmers & The Lowbites’ Too Much Too Young-anticipating Birth Control, Lee Perry’s Kill Them All and Wreck A Buddy by The Soul Sisters. But elsewhere we skirt the more obscure. A jerky Haunted House by The Upsetters is set to the a rhythm of the MOR tune What Goes Up Must Come Down and King Horror’s fast moving Vampire and the steady beat and double entendre-laden Wood In The Fire impress.

Lloyd Charmers returns to give us the very smart Vengeance and Hopeton Reid aka Pama Dice scores with a basic but pleasing entry entitled Pum Pum Wrecker. The Versatiles, featuring Junior Byles, show up with a Joe Gibbs production Push It In and given the raucous DJ shouts and screams present Dave Barker had to make an appearance. He does so with Wet Version, expertly riding the rhythm of Max Romeo’s Wet Dream hit single from a couple of years earlier. A standard but enjoyable DJ cut The Naked City by King Horror and The Upsetters’ breezy Return Of The Vampire (with the only horror element being the title) combine to give a rousing finale to the Loch Ness Monster disc. Basically anyone who is interested in solid reggae dance grooves garnished with alternately rude and spooky film schtick is going to be well pleased on listening to this.

Funky Chicken on disc two is similarly in an abbreviated version, with the Freddie Notes, Rita Alston and Count Suckle efforts expunged. Like disc one, it ensues with an agreeably and upbeat title track, this time its Winston Groovy’s JB-influenced shout and groan that blazes a trail and a jerky and exciting Funky Reggae by Dave Barker, the king of this style of thing, follows on splendidly.

The Rooster by Tommy McCook & The Supersonics continues the lively start. Dice The Boss, a pseudonym for Pama Dice, gives us the less hectic but still driving Funky Monkey Pt 1 and Pt 2 turns up later on the LP. He also offers a DJ toast with quacks Funky Duck straight afterwards, with the Rita Alston song Pop Corn Funky Reggae being the buffer between the two on the original LP.

Later Pama Dice is credited with Sin, Sun & Sex (maybe Malcolm McLaren was taking notes?) and the cool The Worm single. Laurel Aitken also dons the Pama Dice guise on the dance monster Honky Tonk Popcorn. Leslie Kong’s studio outfit The Beverley All Stars’ The Monster was a tribute to Prince Rough, cut over a reggae version of Donovan’s Sunshine Superman and the floating sax of Open Jaw by Tommy McCook ends the selections from the LP. Though cut down to a paltry 8 numbers, Funky Monkey is full of prime dance tunes that can be relied upon to get the feet moving fast.

The Cimarons were the studio band who took up The Rudies’ baton when the latter outfit forged ahead in the UK charts as Greyhound. They supply Funky Chicken Pt2, a suitably tight and snappy instrumental. Lock Jaw, coming direct from Duke Reid’s Treasure Isle, finds Dave Barker and The Supersonics on top form and the pure r&b funk of Popcorn by The Upsetters sets an entrancing dance tempo. They also feature with Lee Perry’s trademark wild sound effects in much evidence on The Tackro, an echo-laden Straight To The Head plus Land Of Kinks.

Psychedelic Reggae by keyboard maestro Winston Wright, with prime fuzz guitar, mixes the funky sound with an exotic backbeat well and Laurel Aitken’s classic Funky/Reggae Popcorn is soulful and fine. The Hippy Boys, who also provided most of The Upsetters at one point, yield the right on the money rhythm of Apollo 11 and Look A Pye Pye by Lloyd Charmers again has Sunshine Superman as its base, this time for some proto-dub moves. Skinhead favourites Symarip are under their Pyramids name for the previously unissued and wild Geronimo and it entirely feels right that Dave Barker ends this collection with one of this very best cut Shocks Of Mighty. After all, he plays a starring role with his tunes on this disc.

Though it would have been nice if both albums retained their original running order, Loch Ness Monster & Funky Chicken is chockful of very danceable, expertly performed and highly addictive reggae gems. There’s seldom a duff contribution to the set, which shows that UK-based boss reggae could stand next to the Kingston originals despite the many detractors. This is an excellent selection that demonstrates skin/boss reggae’s appeal in elegant style and is as sharp and crisp as a newly ironed Ben Sherman.