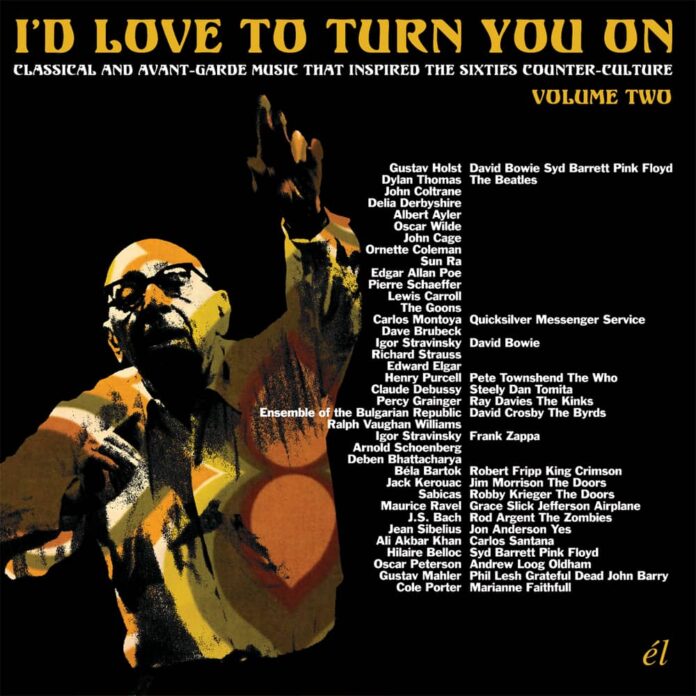 Various – I’d Love To Turn You On Volume 2 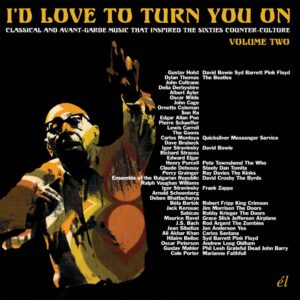 Second in the series subtitled Classical And Avant-Garde Music That Inspired The Sixties Counter-Culture, which gives one a fair idea of just what to expect. Artists as diverse as Richard Burton, Bela Bartok, Dave Brubeck and Cole Porter contribute, as their work gave influence to The Beatles, Robert Fripp, John Cipollina and Marianne Faithfull respectively. Ian Canty switches on to sounds from inner space…

This is the second album of a series begun last year by el Records, the remit of which is to examine the contribution of some of the artists that held sway over the 1960s explosion, away from the obvious rock & roll and blues forbears. The first edition of I’d Love To Turn You On featured many of the same musicians/composers that are presented here, but there are some new faces too. In the accompanying booklet you can learn through direct quotes and stories just how their influence came to inform The Beatles, Ray Davies, Syd Barrett and others of the era.

I’d Love To Turn You On Volume 2 starts with the ominous tones of Gustav Holst’s The Planets: Mars, the Bringer Of War, which apparently a young David Bowie in his band The Lower Third used as a rave-up outro to their stage performances. This stirring piece of music is followed by To Begin At The Beginning, an excerpt from Richard Burton’s classic reading of Under Milk Wood by Dylan Thomas. This disc is big on spoken word and also includes Oscar Wilde’s The Picture Of Dorian Gray Scene One, The Raven by Edgar Allan Poe and Paul McCartney’s girlfriend Jane Asher voicing the main character on a recording of Lewis Carroll’s Alice Through The Looking Glass.

John Coltrane’s riff on old standard Greensleeves gives the nod to the cool jazz that inspired the early modernists and later on this disc Albert Ayler and his Quartet and Ornette Coleman push hard bop sounds into the stratosphere with the squawking sax attack of Spirits and Excerpts From Free Jazz respectively. The playful keyboard sound of Sun Ra’s Advice To Medics forms a chilled come down after that blaze of intensity.

The BBC Radiophonic Workshop’s Delia Derbyshire was a key figure in the development of electronic music and the otherworldly drones of Time On Our Hands are a good example of her unique vision and talent. John Cage and Cathy Berberian’s odd mix of operatic voice, dogs barking and musique concrete entitled Aria with Fontana Mix could even weird-out the fringes of 1970s post punk, never mind psychedelia. Sandwiching the aforementioned Lewis Carroll piece are two brief but atmospheric soundscape items from Pierre Schaffer. This disc concludes with Spike Milligan’s glorious nonsense song I’m Walking Backwards For Christmas – The Fab Four were massive fans and there were certainly touches of Goonery in their film work.

Disc two of this set commences with Carlos Montoya with his flamenco guitar exploration Malaguena, something that you can hear might well have been influential on Quicksilver Messenger Service’s ace John Cipollina, before The Dave Brubeck Quartet’s Take Five, a late 1950s hit single, swoops in. After that we are back in more orchestral waters for the main part of this section of I’d Love To Turn You On 2, beginning with Igor Stravinsky’s jazz-flecked Ragtime For Eleven Instruments. Strauss’ operatic arias Four Last Songs come in a near-twenty minute clump, which highlights some supreme singing by soprano Elizabeth Schwarzkopf, chockful of heart-rending emotion.

A couple of elegant Edward Elgar works Aubade and The Wagon Passes are then ably performed by The London Philharmonic and this is followed by the eight short pieces that make up The Gordian Knot Untied Suite by Henry Purcell, Zimmerman catalogue number Z.597. These shimmer with stately grace. Steely Dan weren’t actually formed until 1971, so the inclusion of one of their favs is a moot point. But as Debussy’s La cathédrale engloutie solo for piano is so sensitively performed by Walter Gieseking, I’m about to start complaining.

In the sleeve booklet Ray Davies confesses to an enduring interest in the work of Australian Percy Grainger, a early 20th century composer/folk music historian. The warm gentleness of his My Robin Is To The Greenwood Gone is joyful to behold. The Ensemble Of The Bulgarian Republic weigh in with Vetcheryai Rado and Polegnala E Todora – two choral items that not many people enjoying Eight Miles High by The Byrds in the 1960s would have necessarily seen a connection to, but they were apparently favourites of David Crosby. A 1936 string quartet recording of Ralph Vaughan Williams’ Fantasia On A Theme Of Thomas Tallis, a homage to the Renaissance composer, ends a disc that I found it pretty entertaining. But if you struggle with classical music, you may well find it being too much to bite off in one go, bar Dave Brubeck.

We get underway on disc three of I’d Love To Turn You On with the 24 minute suite The Soldier’s Tale by Stravinsky, which is split into nine segments. Marche Royale finds violins and brass jousting playfully, while strings and percussion build a sense of urgency on Premier Tableau. Flutes busily tickle along, marking the progress of Danse du diable and the sedate Grand Choral is a work of restrained beauty.

Then The Chicago Symphony Orchestra play Arnold Schonberg’s Five Pieces For Orchestra. Summer Morning By A Lake was picked out by Frank Zappa and the whole suite is fused with an almost mocking, sinister atmosphere which is somewhat akin to The Mothers. We then are granted respite from orchestrated works for a while and instead journey towards Turkey, Iraq and India with four selections from Music On The Desert Road, a set of 1950s field recordings by folk musicologist Deben Bhattacharya.

There’s authentic vehicle sounds, before the fast-picked string dance of the Turkish tune Central Anatolian Dance. A vocal emerges about a minute in and the effect is hypnotic. We journey next to Iran, where a whistle and drum mimics locomotive noise effectively on Rhythm Of A Train. From then on, we’re in India for the sitar heaven of Raga Zila From Varanasi and the chimes of Temple Bells And Drums Of A Bengali Kali Temple, which for some reason made me think of No Limits by 2 Unlimited.

The lively plucks of Bela Bartok’s String Quartet No. 4 follow and after that we get On The Road writer Jack Kerouac reciting San Francisco Scene (The Beat Generation) in hepcat speak from the late 1950s. We have a dollop more of flamenco six string from the master Sabicas with Bronze Gitano and then this disc ends with Ravel’s Bolero. A very well known piece of music, which apart from being a Grace Slick pick also must have impressed Jeff Beck, not to mention Torvill and Dean.

An extract of Bach’s work Mass In B Minor gets the treatment from the Munich-Bach Orchestra And Choir to open up the final disc of I’d Love To Turn You On. Rod Argent Of the Zombies was a fan and you can detect the kind of breadth of vision his band was inspired by, something they must have keyed into later on in their career. I was very much pleased by the appearance of Ali Akbar Khan and his sarod, who is introduced here by Yehudi Menuhin. Carlos Santana calls his music “the sound of singing water”, which is as concise a description of its transcendent wonder as I could come up with. The nearly 20 minutes of Rag Sindhi Bhairavi is serenely reflective and divine.

Hilaire Belloc’s comic poem Matilda directly influenced Pink Floyd’s Matilda Mother and a short section is included here. As Belloc’s estate didn’t at the time want his work to be associated with a bunch of long haired layabouts, Syd Barrett had to hastily rewrite the lyrics for inclusion on The Piper At The Gates Of Dawn. The musical West Side Story called out to youngsters in the UK just beginning to map out the teenage dream, and Oscar Peterson’s version of The Jet Song from the soundtrack truly swings. A cool and bluesy sound gives Oscar ample opportunity to flesh out with his keys.

The near half hour of Gustav Mahler’s Symphony No. 9 in D Major by the Columbia Symphony provides depth and grace, before Cole Porter singing his own song You’re The Top, from way back in March 1928, brings the curtain down on this boxset. As I believe they used to say back in the 1960s, it’s been a trip. I’d Love To Turn You On Volume 2 ties each selection in with the 1960s face that it impacted on as part of the running order. This may confuse the unwary listener when David Bowie or Frank Zappa don’t actually put in an appearance.

I would have to admit that there were times when a little more variety could have helped this collection become more accessible to the interested outsider. The first disc I enjoyed greatly, because it made the most of putting contrasting styles together in a way that seemed natural. This helped me to join the dots between these disparate sounds and the 1960s movers and shakers. The other discs didn’t quite manage to turn that trick so well, something which did hamper the impact. Other than these trifling complaints, I’d Love To Turn You On Volume 2 is a fairly well-targeted voyage of discovery for anyone adventurous enough to take the plunge into a world of sound far, far away from rock music.