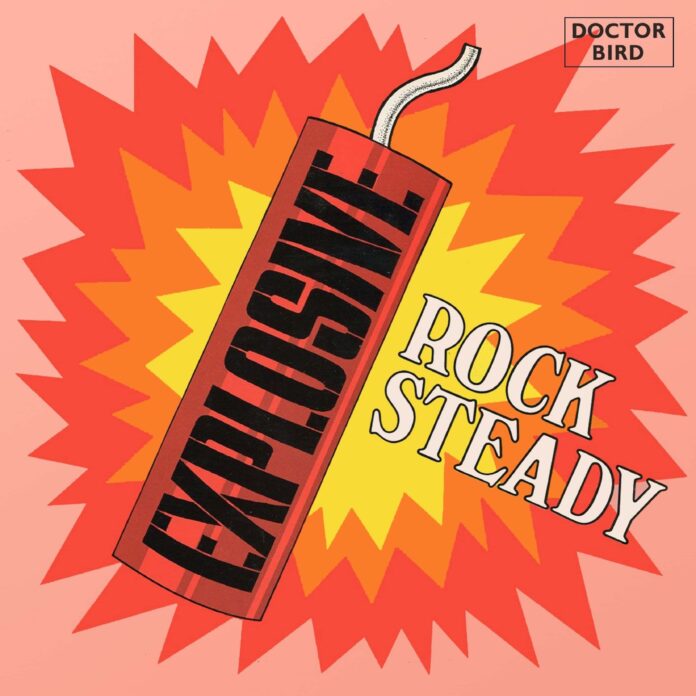 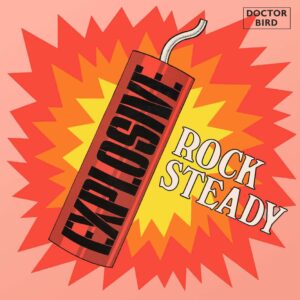 2CD set which delves into legendary reggae producer Joe Gibbs’ early recordings, built around the original 1968 Explosive Rocksteady compilation album. This featured cuts from artists like Errol Dunkley, The Pioneers and The Versatiles. The host of bonus tracks include efforts from Lee Perry, Lynn Taitt & The Jets and Derrick Morgan and among their number are many Jamaican hit singles. Ian Canty tries to figure out whether to cut the red or yellow wire first and he’s colour blind!

Montego Bay born Joel Gibson studied hard to gain qualifications in electronic engineering, in preparation for a career in that field. As a result he worked at the now infamous site in Cuba, Guantanamo Bay in his initial employment. Afterwards he returned to Jamaica to assist with switching the island over to a single electric frequency. Then in 1962 Gibson made the move to Kingston, where he thought it was all happening, in order to start his own business. To this end, he set up his own shop servicing electric equipment in the city’s Beeston Street. By chance this address was not far from the Leslie Kong’s Beverley’s Ice Cream Parlour & Record Store. Joel saw that Kong was making good money through his record outlet and wanting to sell merchandise as well as offering a repair service, he decided to incorporate music as part of his shop’s trade.

His background to electrics gave him a head start in terms of music production, as he was already interested in sound frequencies. Thus it was natural that he made the jump from selling records to having his own music production set-up. Adjusting his name to Joe Gibbs, the novice producer hit big from the very beginning with his first record. The gently teasing rhythm of Hold Them by The Uniques’ founder member Roy Shirley (one of the key tracks on Explosive Rocksteady and an alternate version is also included among the disc two bonus cuts) took off immediately, becoming a big Jamaican hit single. The sleeve note that accompanies this set remarks that this could have even been the first real rocksteady record. Buoyed by this triumph, Gibbs quickly established his own Amalgamated label for his productions and many successes followed.

Joe also gained a reputation for prompt payment which subsequently made him popular with Kingston’s singers and players. This meant that he had easy access to crack sessioners Lyn Taitt & The Jets and vocalists of the quality of The Pioneers, a teenage Errol Dunkley, The Versatiles featuring Junior Byles and Stranger Cole. So Amalgamated was all set up for success during the rocksteady era and going by the evidence provided by this set, so it proved.

Explosive Rocksteady, released in 1968, drew on those early hits for Gibbs, compiling 12 popular single sides. Keith Blake’s I’m Moving On gives the album an ideal start, with a prime rhythm track and a charming and pleasing vocal. Over the course of the LP Joe’s production method at this stage appears to be one that is meticulously arranged, but always using a light touch. Nothing too gimmicky stands in the way of the singers making their mark. The one track that is given a more action packed musical style, Cool Sticky’s excellent toast on the Ethiopians’ hit Train To Skaville that is retitled Train To Soulville, really benefits from the treatment.

The Pioneers’ career was pretty much revived from the doldrums by recording with Gibbs. Long Shot, one of their contributions to Explosive Rocksteady, of course spawned the more successful sequel Long Shot Kick De Bucket during the skinhead reggae boom. But the original model is a cool skanking gem and their Give Me A Little Loving balances high backing vocals and a lower main voice skilfully. They also back Errol Dunkley on the enjoyable and mento-flecked Miss Tourist and a soulful Love Love Everyday. Stranger Cole and Gladdy Anderson team up for the lilting magic of Just Like A River and Uncle Sam’s Country by Dennis Walks has something that sounds like banjo or uke strumming as part of its musical landscape. This is a sign that at this point Joe still occasionally utilised traditional instrumentation. The steel drums on a lovely, lazy sax tune Come Brothers by Hugh Malcolm confirms this and The Versatiles’ cheeky Push It In is agreeably perky.

After the Explosive Rocksteady album itself, we find 17 bonus numbers of Gibbs’ rocksteady-era productions. Lee Perry was tight with Gibbs for a time and here he is represented by his famous theme tune I Am The Upsetter. Lyn Taitt & The Jets, who so often provide the backing for singers here, do a smart piano instrumental entitled Sleepy Lady and Tommy McCook & His Band’s Feel So Good is almost in an older jazz/ska style, but is also a very appealing sound. Roy Shirley’s Be Good shows what an effective singer he was within the gentler pace of rocksteady, drawing emotion out of the words expertly.

Keith Blake, who would in the roots reggae era go on to further fame under the name Prince Alla, cuts a neat romantic number in Musically and he’s also part of The Leaders, who give us the vocal group r&b rocksteady winner Someday Someway. The Overtakers, who featured Leo Graham and Wesley Nelson, hit with the mellow Girl You Ruff and some good echo effects deep in the production are possibly the shape of things to come for Joe Gibbs in the 1970s. A very young sounding Errol Dunkley soars on The Scorcher and this disc ends with the exotic mento sound of Lord Salmons’ Great Great In ’68, the true sound of hope.

Disc two of Explosive Rocksteady also yields a good selection of jewels. The jerky cool of The Overtakers’ The Big Takeover is just wonderful and Hope Someday by The Versatiles builds nicely from an odd structural base. I loved the deep brass on Roy Shirley’s Dance The Auna and some lovely keyboard swirls help Dennis Walks’ very danceable Having A Party stand out. Lee Perry’s Kimble, based on The Fugitive TV series, has an inventive rhythm given another level by his unique lyrical standpoint, although Thank You Baby finds Scratch cast in unlikely fashion as a honey-dripping crooner.

The boogie style lurch of The Creations’ Meet Me At Eight gets its influence from a similar r&b direction, but it is a very good, carefree musical biscuit and Vin Gordon’s brassy Soulful Mood presents the kind of opportunity for his trombone stylings that he just couldn’t miss. There’s not many duffers among the 29 tracks here and Lyn & The Jets’ instrumental takes are well worth copping an earful of. I particularly enjoyed the cool tambourine/sax duet of I Spy and their Upsetter Version is a great instro version of the Lee Perry cut.

Joe Gibbs was obviously the rising star of Kingston music at the time of Explosive Rocksteady. He quickly established his set up with Amalgamated and his own studio and had the pick of Jamaican talent to choose from. He had more triumphs to come in the 1970s, with the advent of dub. But there’s more than enough proof on Explosive Rocksteady to see just why he was so highly rated and the sound he got still cuts the mustard all these years on. You would have to go a fair old way to find a better set of original rocksteady as what we have here is a hugely enjoyable collection from Doctor Bird, who seem to have the pleasing knack of getting things just right.