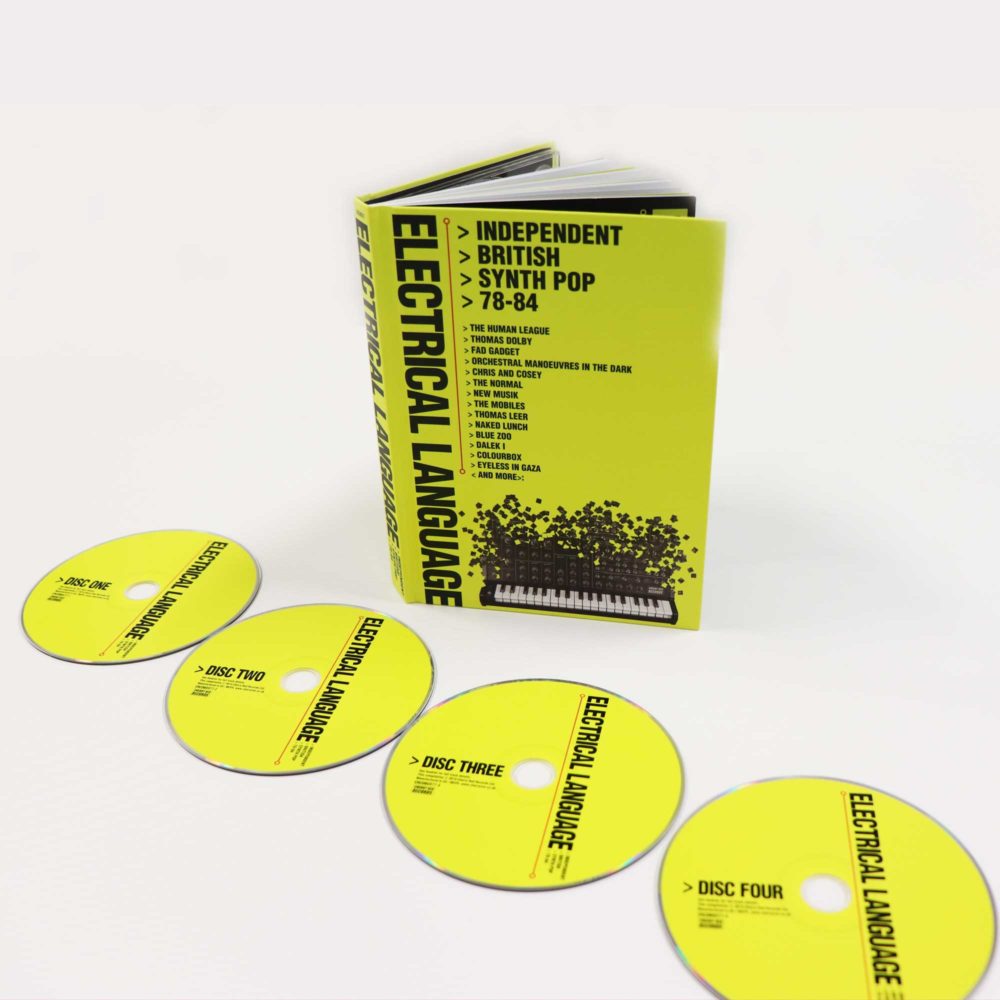 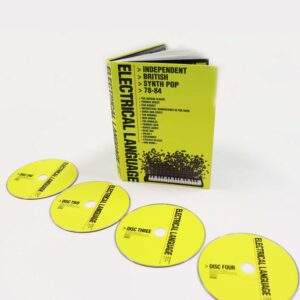 4CD set that includes tracks from big hitters like the Human League and OMD as well as more obscure names such as Colin Potter and Testcard F….LTW’s Ian Canty feels these electronic pulses from yesteryear…..

By 1978, the year which marks the earliest point of this very handsome new boxset, synthesisers had already been around for a fair old time on the UK music scene. The high costs of these specialist pieces of equipment initially limited widespread usage though. It was ok for supergroups with money to burn to splash out on these machines, but for the more financially restrained they remained far out of reach. As the technology improved and the synths got smaller and relatively cheaper, they finally came more within the grasp of the potential synth wizard on the street and at a time when this shiny new kit could be harnessed by young and imaginative minds to produce whole new soundscapes.

1978 was also the year when independent music, buoyed by the raft of self-produced discs that rode the Punk wave in 1977, began to truly establish itself. Influential labels like Rough Trade, Mute and Fast all made their debuts in 78, with the latter two being represented here by a couple of the better known tracks, the Normal’s Warm Leatherette and Circus Of Death by the Human League. People were enthused by Punk, but didn’t necessary want to learn a guitar, join a band etc – with synths all you had to do was turn them on, press something and hey presto you had music. You could record by yourself in your bedroom and get a disc pressed up, thereby circumventing the entire music industry. This was empowering, plus what came out of these machines couldn’t help but sound like “the future” – synths were perfect for providing a musical setting that appeared to be the next step in music.

Though Electric Language has a good number of these DIY efforts, it doesn’t neglect the older artists experimenting with the form (Robert Calvert of Hawkwind fame and Gong’s Tim Blake came from the “Old Wave” but were caught up in the spirit of adventure) and also various Electropop chancers. All of which helps to give a diverse overview of the period. Though the cliché of a synth duo would emerge (complete with “interesting” haircuts, earnest and unnaturally mannered vocal arrangements and a singer who dances like Bryan Ferry would if caught himself in his zipper), most of what here retains a freshness that still has them sounding modern at very least.

Windpower by Thomas Dolby is the ideal opening track really, toying with the harsher side of synth sound and Morse Code bleeps in the intro, before morphing into a brittle piece of perfect Pop. Of course it wouldn’t be long before Dolby was rubbing shoulders with Magnus Pike at the business end of the charts and Orchestral Manoeuvres In The Dark would also hit big, caught here just before their run of hits with the chant-a-long Red Frame/White Light. Be-Bop Deluxe are shown majestically moving into the future on the set’s title track, frosty synth washes combining admirably with their usual stunning guitar work. The Normal’s Warm Leatherette acted as the launching pad for a lot of the outfits featured here and for Mute Records itself (possibly the UK’s premier Electronic imprint). The song still sounds chilling, the spartan musical landscape suiting the Sci-Fi nihilism of the lyric down to the ground.

Away from these better-know names, Alex Fergusson (ex-ATV at the time, but he would re-join them within a year) impresses with one-off 1980 solo single Stay With Me Tonight, which pre-empts the sound of Communicate on ATV’s next LP Strange Kicks and Testcard F harness the Casio VL-Tone alongside a YMG-type vocal on their fine Bandwagon Tango. New Musik arrived late-ish on the New Wave scene, but they had their own style and did it very well, as is evidenced on the ahead-of-its-time eco-concern of The Planet Doesn’t Mind. Music For Pleasure would later sign to Polydor and be led by one-time Johnny Rotten lookalike Mark Copson, but the original line up fronted by Alan Peace impress here with The Human Factor, coming on like a faster version of Devo. The remainder of Oi! band the Violators Ice the Falling Rain offer the bright and attractive Life’s Illusion and Liverpool legends Dalek-I’s The World is both catchy and knowing (the last line observes wryly “That was a song about the world”)

Moving on to disc two, to begin with we have the original version of Circus Of Death by the Human League, their apocalyptic Hawaii 5-0 episode. This is followed by the pure Pop thump of the Passage’s “should have been a hit” XOYO. Fronted by TV presenter Dick Witts, only distribution issues must have kept them from crossing over to the charts with this one and it demonstrates the Glam simplicity that often fed into Electropop. Also a lot of it was so fast it sometimes left Hardcore Punk for dust – see the breakneck pacing of the Basking Sharks on Croatia and Fad Gadget’s classic Ricky’s Hand.

If the Mobiles’ Drowning In Berlin was more standard New Romantic chart fodder than anything else, stuff like Rabies by Naked Lunch more than compensates and Jeanette’s memorable Electro Jazz song In The Morning also shines bright. This portion of the comp ends with an oddball take of Alvin Stardust’s My Coo Ca Choo (possibly influenced by the Human League’s go at Rock & Roll), another facet of this period was people having a punt at a hit with this new-fangled sound – you always had cash-ins of course and this one isn’t bad (the Electronic Ensemble’s It Happened Then on this same disc is a slightly more craven example). A few members of this band went onto being in the more serious Hard Corps, a Peel fav.

It would be remiss of me to not mention Drinking Electricity as we move to disc three of the set – their Good Times is totally brilliant and it makes me a little sad that they did not receive the success they were obviously due. They seasoned their electronics with some guitar work that wouldn’t have seemed out of place on an Orange Juice single, great female/male vocals and a really catchy tune that always seems on the verge of turning into The Locomotion! It is wonderful and I urge anyone to seek them out. Eyeless In Gaza were another band who never got the acclaim their efforts warranted and they perform well on the slow and passionate Veil Like Calm and Pink Industry, based around Big In Japan’s Jayne Casey and Ambrose Reynolds, set a squeaky rhythm atop a tastefully reserved voice and melody on their curiously titled Taddy Up.

Also on this disc we also have the perennially underrated and fab Section 25 with a great 12″ version of their song Beating Heart, which had one wondering why they didn’t achieve similar success to some of their Factory labelmates. Colin Potter’s Falling Downstairs is another ultra-fast gem and Final Program’s Videomatic utilises electronic thuds and bashes, but they don’t obscure a savvy piece of song-writing. Joe Crow was briefly a member of the Nightingales, his Absent Friends doesn’t really sound like them at all though, being more like a lowkey synth-driven Psychedelic item. It is excellent though and a shame with the promise shown he doesn’t seem to have recorded much again afterwards.

Arriving at disc four we have Tim Blake, who despite the Gong association actually sounds quite Punky on Generator (Laserbeam). Zoo Records’ wheeze Lori And The Chameleons (actually Dave Balfe and Bill Drummond with Lori being the front person) proffer a Disco Synth sound on Touch and Kevin Harrison’s Chase The Dragon is a pleasing lo-fi instrumental. Time In Motion sound a little like Sparks in the synth duo days on Stay With You, always a good thing and Eddie And Sunshine (formerly of almost forgotten Punks Gloria Mundi) take the modern sound all the way back to 50s impressively on the paranoiac Pop of There’s Someone Following Me. The whole set ends with Morgan Fisher (ex-Mott The Hoople) with his spoof act the Hybrid Kids’ Chipmunks-style version of Lennon’s Happy Xmas (War Is Over).

Electrical Language is a nicely produced set in a “book” format, with pen-pictures of each act and an introductory essay from Dave Henderson. He also oversaw the “Close To The Noise Floor” series and this set slots comfortably in as a companion piece to those collections. As is always the way, one can debate acts that are not present (most obviously big names like Depeche Mode, Soft Cell and the Cabs I would have thought), but what is present is more than enough to get one’s teeth into.

There are a few real clunkers in here, but the ratio is skewed far more in towards out and out winners. For me discs two and three are the strongest of the set, with a great deal to enjoy and bringing many performers like Jeanette, Drinking Electricity and Joe Crow rightly into the spotlight, but all four have their moments. All things considered Electrical Language does a marvellous job of corralling the excitement of early electronic Pop experimentation and how that set out a remarkably durable template that still has resonance today. The best tracks still sound like a future waiting to happen and the vast majority of the rest are still great fun, making Electric Language a quality addition for anyone who loves the sound of pure Pop, not just tech boffins.