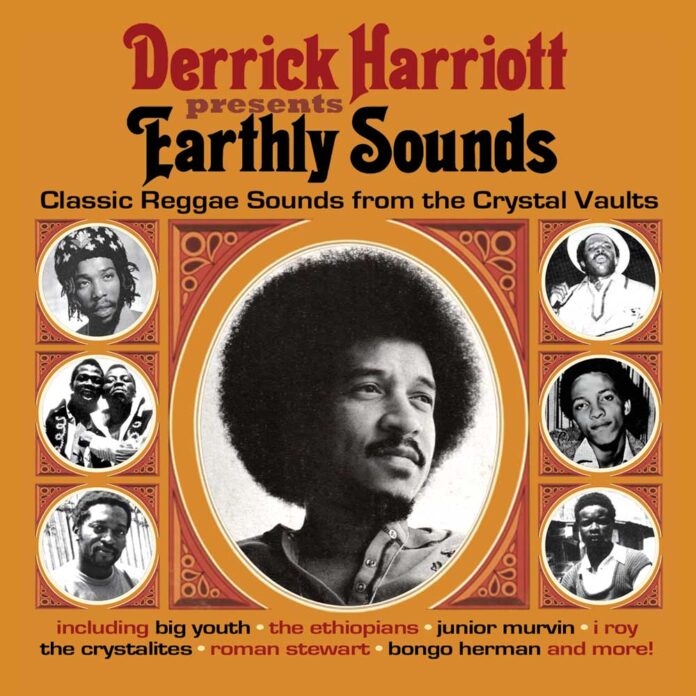 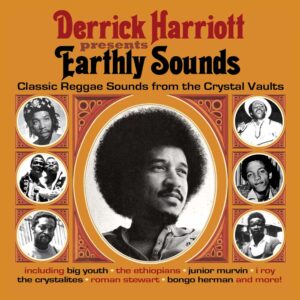 With a full title of Derrick Harriott Presents Earthly Sounds, this 2CD set contains early 1970s cuts from Augustus Pablo, Big Youth, The Ethiopians and Horace Andy, plus Harriott’s studio outfit The Crystalites. Among the 48 tracks are a number of unreleased items and 20 tunes that are new to CD. Ian Canty needs to concentrate on terrestrial matters…

Doctor Bird have done a fine job over the past few years in giving a number of perhaps unjustly ignored reggae producers an extensive reissue programme. Earthly Sounds continues on from previous Derrick Harriott releases like The Crystalites’ The Undertaker album and School Days by Scotty (reviewed here and here respectively), which demonstrate his work in a variety of different styles all under the reggae umbrella. This new set covers a timespan from 1971 to 1973 and in its course it trawls in some sizeable hits, along with revealing some nice curios too.

By 1971 Harriott was well established in Jamaican music, having begun as a performer with The Jiving Juniors before adopting a dual role in producing and singing his own material on Crystal Records. The Juniors spent time recording with the big two e.g. Duke Reid and Coxsone Dodd, so Derrick had the opportunity to see the best at work before embarking on his own studio career. Much success followed in both of these roles and by the turn of the decade, with his instrumental outfit The Crystalites backing carefully selected roster of singers and groups, he was pretty much at the top of the tree himself.

1971 was a more difficult year for reggae as a whole as the skinhead craze, which fuelled the busy and fruitful record export trade from Jamaica, died down in the UK. It did leave committed fans over here, but the days of Jamaican hits having a good chance of crossing over to the UK pop charts were drawing to a close. Dub and DJ toasting were big news at home however and both helped to usher into being a new era in JA music. Those two styles were in their infancy at this time, but their early rumblings come into play often during Earthly Sounds.

Earthly Sounds begins with Winston Wright’s Cotton Comes To Harlem, a bright enough organ instro sound to start and is followed by one of Derrick’s star turns The Ethiopians with What A Pain, which is enhanced by an appealing and emotional vocal. Both The Ethiopians and Keith & Tex indulge in medleys of their hit tunes, indeed The Ethiopians have the two part Best Of Five. They are ok, but perhaps only of interest to completists. Even so, the mix of hit tunes probably went down well at the dances. The Ethiopians fare better with Throne Of Justice, which has some prime lazy trombone parps added and the Bible-themed Lot Wife.

It’s good to hear Bongo Herman and his folk-influenced hand percussion and it is heard to good effect on both Know Far I and the very catchy We Are Praying, which The Crystalites do a good dub version of too. The Diamonds, later to go on to much success in the roots era when adding Mighty to their name, show up with the sweetly voiced Mash Up and Joe White’s Call Me Trinity marries the ongoing Jamaican obsession with cowboy films to some fine dub/toast moves. The rather obscure Ralph Brothers, who recorded Conquering Lion with Yabby You but very little else, impress with the excellent pop reggae sound of I’m Going Home.

It must be said that there are a couple so-so skinhead-style organ instrumentals featured here, the format of which was probably showing signs of being dated even back then when they were released. The three reggae-fied Shaft theme versions that end this disc by The Now Generation, The Preacher and The Crystalites (the latter two renamed as Black Moses and Black Moses Version) are well accomplished, but ultimately not wildly different from the original. It does give the impression of ending the disc with a pretty damp squib, but happily beforehand there is a fair amount to engage one too.

The second disc of this set settles down into a format of original cuts being immediately followed by their dub versions. It’s a pleasing selection with plenty of variety and for me is the better of the two platters included. DJ toasts and dub are much in evidence here, but there is still also some scope for singers like Junior Murvin and Horace Andy, so it all makes for a fine selection.

Manley Buchanan aka Big Youth, who just coming into his own in his DJ career, skilfully rides on top of Keith & Tex’s Stop That Train rhythm on Cool Breeze and cuts Dock Of The Bay over one of Dennis Brown’s earlier records for Crystal, the Silhouettes single. I Roy was a more established toasting hand and his confident style gives us his classic Tougher Than Tough and Frankie J & Melinda, the latter of which ensues with a long patois intro.

Roman Stewart & Dave (Robinson) gives us a taste of reggae to come in the 1970s with Changing Times, a proto roots sound. A young Junior Murvin appears with the comic Big Boy, his voice registering a tad lower than on Police & Thieves, but still full of soul power and as if to proves singers weren’t totally out during the 1972/1973 period covered by this disc, the great Horace Andy pops up with an elegant Lonely Woman.

Melodica dub marvel Augustus Pablo is featured on a number of the dub cuts here and his Bells Of Death utilises Harriott’s rocksteady favourite The Loser and takes it in a dreamy direction. Bedroom Mazurka works much better in its Version 2, where the Serge & Jane style antics of Derrick and Fay Bennett are cut and one can simply enjoy the fine instrumental touches employed and Pablo’s timeless sounding melodica. The dub versions included here are mainly pretty good, with Blacula by The Crystalites being good daft fun complete with horror movie voices and screams and Sixth Sense takes the same rhythm and cuts it right down, subtly highlighting the gentle flute.

Derrick Harriott was in his prime as a producer at the point in time Earthly Sounds captures and for the most part it is a very enjoyable ride. It catches roots, toasting and dub in their experimental phases, just as all three sounds were starting to make waves in Jamaica and having such talent as Big Youth, I Roy, Horace Andy and Augustus Pablo on hand meant Del was primed to success in the new environment of 1970s reggae music. Disc two was by far the winner for me of the pair presented here, but scattered throughout Earthly Sounds are enough gems to please anyone with a taste for inventive reggae music with great tunes.