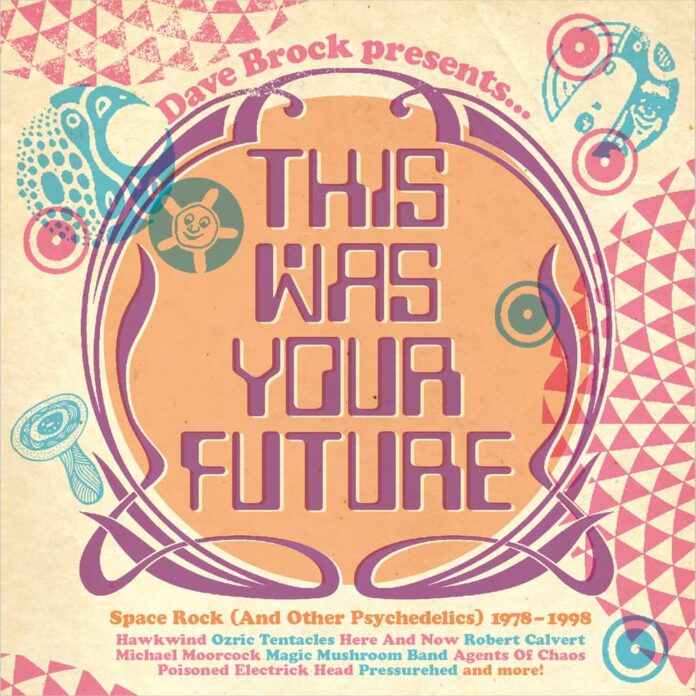 Various – Dave Brock Presents This Was Your Future 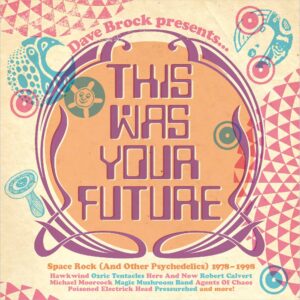 Hawkwind’s Brock-Meister General helms a collection of “Space Rock (& Other Psychedelics) 1978-1998”, taking in contributions from Ozric Tentacles, Sun Dial and Here And Now among others. Mr Brock himself turns up in a variety of guises, including with The ‘Wind themselves. Ian Canty travels through space and time

On the face of it there are few people better qualified to oversee a boxset of space rock than Dave Brock. After all, he has piloted Hawkwind all the way through the years since their formation in 1969 onwards. For a considerable amount of that time, they really appeared to be sole keepers of the science fiction rock flame. By the late 1970s though there were a few other enthusiasts emerging and all through the next decade and the 1990s space rock gradually started to gain ground, drawing strength from the free festival/new age traveller community. Psychedelia also underwent a couple of its regular revivals during 80s and 90s. The strong connection between it and space rock’s genesis helped attract further interest in the sound over the years.

Let us ponder space rock itself before we dive into this set. At first the form seems to have been a coming together of esoteric/sci fi lyrics, psychedelic drones and a progressive rock relentlessness that bordered on protopunk. But each successive mutation threw new elements into the mix, with ambient textures, heavy metal riffing and even acid house being utilised. In taking on all these influences, space rock has managed to keep itself relatively fresh. Thus it was an ever-changing beast in the final part of the 20th century and this is the time period documented by This Was Your Future.

Logically enough we begin here with the title track from Hawkwind’s 1979 album PXR5, Dave Brock’s agreeably motorik-trippy pop number. Space travel was clearly in Hawkwind’s blood and that is put to good use here in this song’s story line. We then fast forward to the 1990s for Omnia Opera’s Space Bastard, an excellent guitar-heavy rejigging of Brock and Hawkwind’s core ingredients which is seasoned with a side serving of sonic sludge. Originally issued on cassette in 1992, the obscure but appealing Astral Tjunc by St Helens’ band Poisoned Electrick Head is a little more delicate than their reputation as punks playing prog might at first suggest.

The long-running Somerset-formed festival kingpins Ozric Tentacles had to crop up on a collection of space rock really and Velmwend, from their debut cassette Erpsongs, has a good wobbly electric pulse running through it. Gary Masters’ Magic Mushroom Band originally started amidst the brief psychedelic revival of 1982, but here they are caught nearly 10 years on with a lovely piece of warped pop called Pictures In My Mind.

After a very strange An Evening Following A Cuttle-Fish by Italian adherents Kryptästhesie, Dave Brock turns up solo with a haunting Green Finned Demon from his Earthed To The Ground LP. Brock’s long-time Hawkwind colleague Huw Lloyd-Langton and his band give us Candle Burning, which has a good momentum and some fine guitar as one would expect. His Flicknife labelmates Underground Zero’s feisty Aimless Flight is kind of like The Hawks crossed with Penetration and highly addictive. This first disc ends with Treatment’s punky Damage and the eerie psych of The Higher Sun by Moom.

Dr Hasbeen with the speedy and spacy Spirit Of Brock starts disc two of This Was Your Future. This was is somewhat of a tribute to Dave Brock as he himself had used the pseudonym on his LP The Xenon Code, but here Martyn Needham dons the mask. Gary Ramon’s Sun Dial will not require much of an introduction to most psych fans and Outer Limits To Yr Brain, their track here, is suitably noisy and epic. The novelist Michael Moorcock has been a long time associate of Hawkwind and had many brushes with the music scene (he wrote the “book as a newspaper” version of The Great Rock ‘n’ Roll Swindle). These ventures included recording with the band Deep Fix and the catchy, gritty guitar sound of Dodgem Dude turns up here.

Robert Calvert’s engagingly strange Lord Of The Hornets is grand fun and it is followed by Hawkwind in their 1978 Hawklords guise, a name forced on them by legal issues. The Age Of The Micro Man comes from their 1978 25 Years On LP, where they made a very game effort to match up to the new wave with some soaring synth moves. This fine effort is followed by another would-be medical man in Dr Brown aka Kev Ellis, who maps out the full-throttle Dreamscape.

There are the first signs of the kind of blissed-out chill that crossed over into dance on Kava Kava’s Poke, but The Lizard Sheds Its Skin by The Tryp is perhaps a little too self-consciously quirky. Brock and Calvert team up next with their Sonic Assassins project, which yields a cool Golden Void and Mandragora, who were directly inspired by Hawkwind and Here & Now, go back to the progressive well with a riff monster called Rainbow Warrior. Coming from Austin in Texas, ST 37 started as a punk act but had gravitated towards space rock by the time of their bludgeoning and very fine contribution to the set Ghosts Of Tempera Nymphs.

Moving on, we reach the final platter of This Was Our Future. This disc begins with boogie band Dumpy’s Rusty Nuts and their atypical space rock tribute to Hawkwind themselves. DB was on hand here and he also features with his late 1980s band Agents Of Chaos on the synth squalls and chugging backbeat of Hades Deep. Crow came from Whitstable and like Dumpy they name their song after another band. In this case it was Led Zep, which builds itself with slowing winding up tension in the intro before launching into a fuzzed up, punky mayhem.

Ethereal Counterbalance were headed up by 1960s psychedelic fellow traveller Rod Goodway and their At The Oasis provides the listener with a genuinely disconcerting trip direct to wigged-out central. Nick Riff, previously of Serpent, infuses the droning Tribal Elders with plenty of atmosphere. Another stalwart of Ladbroke Grove and space rock itself was Tim Blake, who fitted in spells with both Gong and Hawkwind as well as recording solo material too. Passage Sur La Cité (Des Révélations), which is his effort featured here, is a case of electro-chilled ambience to the max. The final Dave Brock-affiliated piece is the motorik-driven In Search For Shangrila by Psychedelic Warriors, his power trio of the early 1990s.

Long-running Norwegian band Tangle Edge gives us 1997’s Yatantah Pt 1, where an insistent bass anchors jousting guitar and percussion well. Here & Now are a shoe-in for this type of set, with their hippy punk credentials assured after a 1978 tour with Mark Perry’s ATV and they give us a bracing live number in 23 Skidoo. It develops from a “Look Around You” style synth patterns and then warps into an acidic and endearing instrumental item with plenty of bite. Finishing off This Was Your Future are US outfit F/i with the space zooming of The Circle Is The Square having a clear debt to Hawkwind and Cybergenetic Experiment X by Bristol’s Praise Space Electric, more an ungainly sound-clash of jagged beats and a drum-led gallop.

I’m admittedly far more of a space rock dabbler than a buff and as such this set contained a lot of interesting stuff that I was not already privy to. I would imagine that fervent Hawkwind fans would be familiar with most of the Dave Brock connected pieces included here, but that does leave a significant amount of unconnected and relatively unheard material. The focus on the cassette culture that pretty much went under the radar in the 1980s and 1990s results in some delightful diversions. Whilst I felt a few of the contributions were a little ho-hum, the bulk of This Was Your Future is enjoyable and enlightening, an alternately pummelling, laidback and outré listening experience that delivers extra-terrestrial thrills.