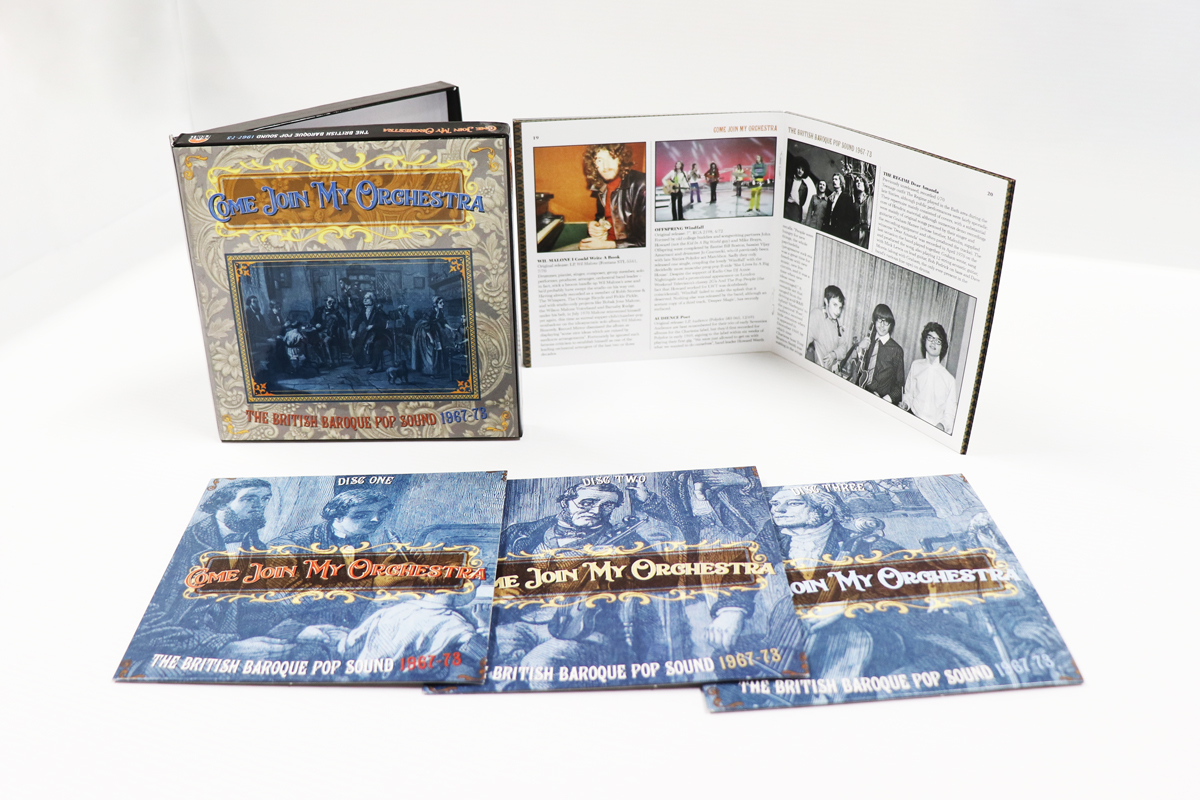 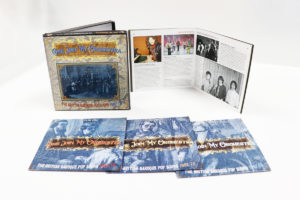 Subtitled The British Baroque Pop Sound 1967-73, this new collection of orchestral Psych Pop features 80 examples of the form over three discs, many not issued at the time….Ian Canty hears an unexpected spin off from the UK Psychedelic boom…………..

When the wild sounds of The Pink Floyd and others emerged from the scene’s base camp at UFO in Tottenham Court Road towards the end of 1966, no-one could have imagined the effect that this loud and discordant music would have had on “middle of the road” Pop Music. Many of the practitioners of this sort of thing were hardly the kind to turn on, tune in or drop out. But they were more than happy to bomb down Carnaby Street to get kitted out in dandy threads, dose their lyrics in whimsy and add orchestral touches to present the “now” sound. Baroque Pop was born, basically meaning 60s Pop being married to Classical pretentions, with string sections and an often melancholic lyrical mindset being two of its more prominent characteristics. Lush sounding melodramas for Autumnal days, the format was remarkably durable, outlasting Psychedelia and scoring hits well into the 70s.

Come Join My Orchestra looks at this particularly ornate musical style and encompasses tough Psych and Soul bands on a day off (The Move, The Alan Bown!), soon to be Prog-Behemoths (Curved Air, Barclay James Harvest, gulp, Genesis), Folkies taking a trip (Bert Jansch, Ian Campbell Group) and acts like the Zombies, who had a big hand in creating this thing in the first place. Also one has to acknowledge the influence of the Beatles and particularly Paul McCartney, who had already been experimenting with “Pop with strings” for a few years before 1967. Having access to an entire orchestra didn’t always mean being swamped in a big production though, at times here the bands and artists operate with commendable restraint, just a few strings and the voice plus guitar or piano pushed right up front.

Commencing with the wide-eyed, simple beauty of Al Jones’ flute-enhanced title track, we’re quickly ushered into a world of inner torment, verdant instrumentation, allusions to the early part of the 20th century and above all achingly beautiful tunes. Clifford T Ward shines on Coathanger, excellent “Big” Pop Music which begins with a lovely fade in and continues to impress right to the end. Years before Gilbert O’Sullivan became a staple on Top Of The Pops, his debut single Disappear made me think of Peter Skellern and John Shuttleworth, might not sound like a recommendation but believe me it is.

It was inevitable the form would appeal to pop brainboxes like Stackridge, (future Korgis) who provide the cool drift of Everyman and 10CC. Their track here Today, released under the pseudonym Festival, is a real lost Godley/Crème pearl. Isandula Road by John Gill benefits from a stomping Orchestral Pop backing and Genesis completely stump this reviewer with a bright, horn-led goodie in Am I Very Wrong? (but where did it all go wrong? I am bound to reply). Immediate recording artists Warm Sounds put me in mind of Village Green-era Kinks on Sticks And Stones, Music Hall Psych and very pretty too. Private Harold Harris by the Ian Campbell Group is much in the same mode and this disc is put to bed by Five Steps Beyond who offer the sad and touching Not So Young Today.

Continuing onto disc 2, we encounter Merseybeat legends the Searchers in their Folk Rock phase, Popcorn Double Feature is their track here and seems purpose built to show off their soaring hamony vocal talents. Barclay James Harvest imbue their ghost story Mother Dear with some spooky-sounding strings and Yep by Bridget St John is cool, weird and strange Psych Folk penned by Kevin Ayers and Daevid Allen of Soft Machine. Erstwhile Radio Star and John’s Children frontman Any Ellison strays from wanton Proto-Punk on Its Been A Long Time, which sound-tracked the love scene in the film Here We Go Round The Mulberry Bush. It is a catchy and elegant wonder, making one muse on why it never became the big hit it surely deserved. It even had Bowie producer-to-be Tony Visconti aboard.

The Baroque Pop sound seemed open to all and Monty Python star Michael Palin wrote Barry Booth And His Orchestra’s He’s Very Good With His Hands – the mention of balsa wood and glue a giveaway to Palin’s involvement in this jaunty bit of Classical Pop Sike. Genevieve By Angel Pavement isn’t in the highest fidelity, but the low-key build and guitar interjections aid a very pretty and well sung effort, original too. Of course Procul Harum show up here – their offering on Come Join…… is Luskus Delight, recorded live with the Edmonton Symphony Orchestra. This track proves that even when they sailed perilously close to being totally overblown, Gary Brooker and his mob always kept their Pop nous intact.

Apart from the Fabs, the Zombies were surely the trailblazers of Baroque Pop. Fittingly they feature on disc 3 with their Odyssey And Oracle track A Rose For Emily, presented here in an alternative version with lots of cello and mellotron touches, it is delightful. Also Zombie Colin Blunstone shows upon disc 1 under the alias Neil MacArthur on Don’t Try To Explain, accompanied by an organ sound that seems to be desperately trying not to break into A Whiter Shade Of Pale. The easy charm of Gerry Rafferty shines through on the Humblebums’ Rick Rack and Katch 22 apply a little bubblegum into the sparse violin/guitar/voice and whistle of Thoughts On A Rainy Day.

As always part of the joy of these boxsets are the stories of the acts which are detailed in the sleeve notes. The Simon of Simon, Plug And Grimes ended up writing the theme to EastEnders, the dreamy acoustic vibe of I’ll Keep Smiling a world away from soap-opera land. Edwards Hand (ex-Psych outfit Picadilly Line) enjoyed the patronage of George Martin, but their sole LP which included If I Thought You’d Ever Change My Mind was only released in the US. Cilla covered the track and scored a Top 20 hit in 1970, leaving both Rod Edwards and Roger Hand to rue this missed opportunity. Their version is at different points sedate and spectacular.

Lea Nixon won a competition run by Disc magazine and judged by a panel including future Wonder Woman Lynda Carter, but that didn’t stop the lovely soft Folk Pop of New Kind Of Feeling disappearing without trace. Chris Baker’s demo of Only Fooling shows what could have been a major talent – a fleeting glimpse only, but this has some with some lovely jangly guitar and flute work which adds to the song’s delicate beauty.

Agincourt (now there’s a Folk Prog name!) were a studio creation that included Peter Howell, who would later have a hand in updating the theme to Doctor Who in 1980 and work in the BBC Radiophonic Workshop. Their All My Life shuffles along pleasantly and is followed by Elliot Mansions’ Sunshine Pop nugget Shades And Shadows. The whole set ends fittingly with Goodbye by John George (but not Paul And Ringo!). This is an stylish piece of piano Pop with some neat upbeat “dance” sections, even though John George himself seems to be an enigma yet to have been solved.

Though not really for fans of the less commercial, more trippy end of Psychedelia, Come Join My Orchestra has plenty of plaintive Pop goodness to go round, warm storytelling music mixed with a Classical bent to everyone’s benefit. The set works as a pleasing whole, drawing together a variety of wildly different acts in their most contemplative mood and enhanced by musicians who stepped outside of their Orchestral comfort zone with a confidence drawn from their years of experience. All this makes for excellent listening for these cold, dark Winter nights, full of reflective, but ultimately buoyant and cheering sounds.