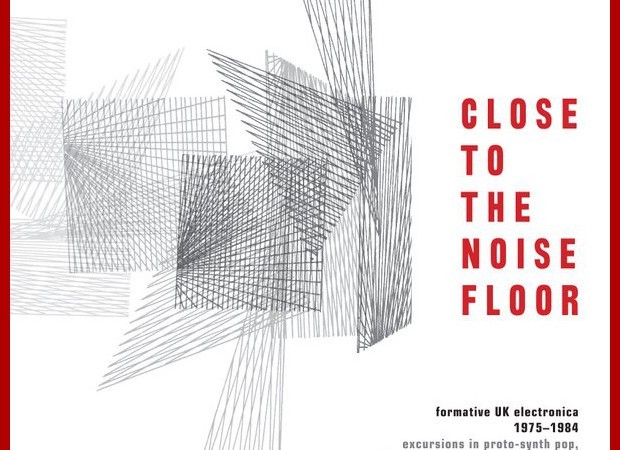 Various – Close To The Noise Floor

Two years in the making, an expansive 4 CD overview of the first decade of the ever evolving UK Electronic Scene presented with an essay by the writer of the influential Wild Planet column in “Sounds” Dave Henderson, plus artist biographies and rare photos….Ian Canty takes a walk on the difficult side…..

Though the Punk boom of 1976 opened up a space for many of the artists featured here to at least get some low-level “exposure”, several had been beavering away in solitude well before the summer of hate, experimenting with processed electronic sounds like bedroom Joe Meeks. Possibly inspired by the German pioneers of electro such as Cluster, Kraftwerk and the fast editing mayhem of their more avant garde fellow countrymen Can and Neu! (the baffling cut-up that money dictated the second side of “Neu!2” to be may have even carried more weight than their much heralded début), all over the country frustrated non-musicians worked on their odd sound collages with seemingly little commercial appeal, in near total isolation. We also must not forget that the slightly less hip bands (like Hawkwind for example, very much in the doldrums until people started using their ears again after Punk and even Vangelis gets a name-check in the sleeve-notes) that skirted the prog rock scene also may have had an input too.

Arguably there could be no-one else but Dave Henderson to write the leading essay that is included with this box; his Wild Planet column in “Sounds” was the first real documentation of this phenomenon, a mainly tape based culture and as such it provided a vital outlet for this strange conglomeration of bands and artists, most of whom produced these pieces for their own enjoyment and possibly to swap tapes with similarly inclined folk. In this feature he would do mini-biographies of the bands, contact addresses etc, basically getting information out into the wider populace (many of the bios are featured in the accompanying booklet here as they were originally presented in “Sounds”). By highlighting these “niche” acts in what at that time was a big selling music paper and writing in an accessible fashion, he even got people who picked the rag up for its Oi!, reggae and metal coverage to pay attention (me included) and for that I thank him. He helped expand my musical horizons far beyond what I had listened to before and that is something we should always be striving to do.

What is surprising is exactly how prescient a lot of this music previously considered “difficult” and “uncommercial” (if actually considered “music” at all) was in anticipating the course of Modern Pop as we know it. The first two tracks on disc one date from 1981, but the dance beats on Five Times Of Dust’s “Computer Bank” and the Klingons’ “R.A.M.” pre-empt Acid House well before anyone else had an inkling. They could have been made by someone like Altern-8 nearly 10 years later in fact.

Though obviously not full of catchy pop-tones there are moments of considerable beauty on here: Blancmange’s “Holiday Camp” is nothing like the ersatz Talking Heads pop soon they went onto, the aural electronic equivalent of watching waves breaking on a beach at dusk. Some featured here are like film soundtracks for unmade movies – Nagamatzu’s “Faith” and BEF’s “Optimum Chant” being good examples of this, with their wide-screen, gently introduced motifs. Words are chopped up, garbled, the antithesis of the traditional “song”. Inner City Static’s “Fractured Smile” is as much BBC Radio-phonic Workshop as it is Kraftwerk and Adrian Sherwood’s Voice Of Authority offer here some sort of Industrial Dub music on “Stopping And Starting”.

Somehow music like the stuff presented in this collection entered the mainstream. Part of the reason may have been that some of the bands featured here, that started from the most obscurist of roots, went on to have massive commercial success. Disc two has a number of acts that reached the higher end of the charts: “Being Boiled” ended up in the Top Ten on the back of the Human League’s hit elpee “Dare” but at the time of recording for Fast Products in 1978, the League were something else altogether, mass-media obsessed pessimists who only saw frighteningly bad things in the future. OMD were far into the realms of electro-pop by that time too, leaving the sound of “Almost” way behind in their Liverpool roots as the ID. John Foxx, who with Ultravox! veered from Bowie inspired glam-punk towards a new, machine-driven sound, has a demo version of “A New Kind Of Man” which says it all really.

The other side of the coin is bands like the Instant Automatons who were at the vanguard of the tape-zine culture and viewed by some as wilfully enigmatic. The classic “Scared To be Alone” (not featured here) proved they could write great paranoid pop, but “New Muzak” is burbling, bass driven, like a southern John Cooper Clarke and the Invisible Girls. It even has a wheezy chorus that it suddenly ends with, sabotaging it perfectly. Tricksters like Morgan Fisher’s Hybrid Kids and Albertos spin-off Gerry and the Holograms show up too, somehow managing to make strides towards the future on the back of a spoofing.

Disc three darts off in the direction of much more unfamiliar territory. Zorch come at us from all the way back in 1975 with Adrenalin (Return Of The Elohim Pt 1) and if the title hints at Prog, the pulsing, pristine heartbeat rhythm and swooping space sounds hit the button marked “21st Century and beyond”. This could have been recorded yesterday, a medative, somewhat scary atmosphere piece that builds to a shattering, bleeping climax.

Ron Berry’s “Sea Of Tranquillity” is kind of eerie, kind of beautiful, “chilled” electro before its time and Adrian Smith’s sinister “Joe Goes To New York” squeezes in some distorted Shadows guitar alongside Suicide squalls. Attrition, who started out as a Coventry Punk band, are represented here by an edit of their 22 minute “Dead Of Night” that gives you an idea on why they became one of the leading names in the industrial/orchestral/electronic crossover and Tangerine Dream devotee Mark Shreeve maps alien landscapes with “Embryo”.

The final disc has Throbbing Gristle who cast a huge shadow throughout the other music featured here, it’s hard to have seen “difficult music” taking off to anywhere near the extent it did during the time-scale catalogued here without them. “What A Day” is a ranting, seemingly simplistic, percussive beast. The Legendary Pink Dots, who I remember being stalwarts of Wild Planet, bring their twisted psychedelia to “God Speed”, Alien Brains give us “Menial Disorders” direct from one of their scantly attended live performances and Third Door From The Left provide thumping and discordant thrills on “In The Room”. Gilbert and Lewis of Wire, along with Russell Mills sign off the collection with the scary whistle of “Mzui Extract B2” which is about as far away from “1,2,XU” as it is possible to be.

Some of the pieces featured in this collection are admittedly “challenging” listening, I mean, otherwise why would they be here and what would be the point? The whole purpose for many of the artists on “Close To The Noise Floor” was to kick out of the standard popular music structures and aim for the stars, or their own inner space, anywhere apart from the ordinary. A project such as this gives us a chance to see first-hand the development from the seemingly crude beginnings to a more developed aesthetic that finally begat the more highly polished electro-concoctions of the modern day and yes, that is valuable. But development was not the key issue here; people wanted to make their mark, drag music their way and suggest a possible future. It’s all here between the sheets for your listening pleasure. What on earth are you waiting for?

More on “Close To The Noise Floor” on Facebook here