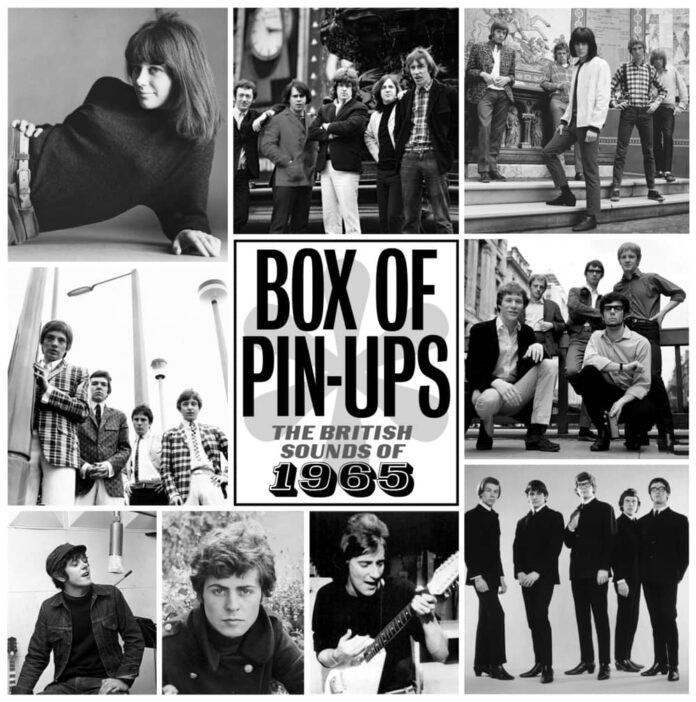 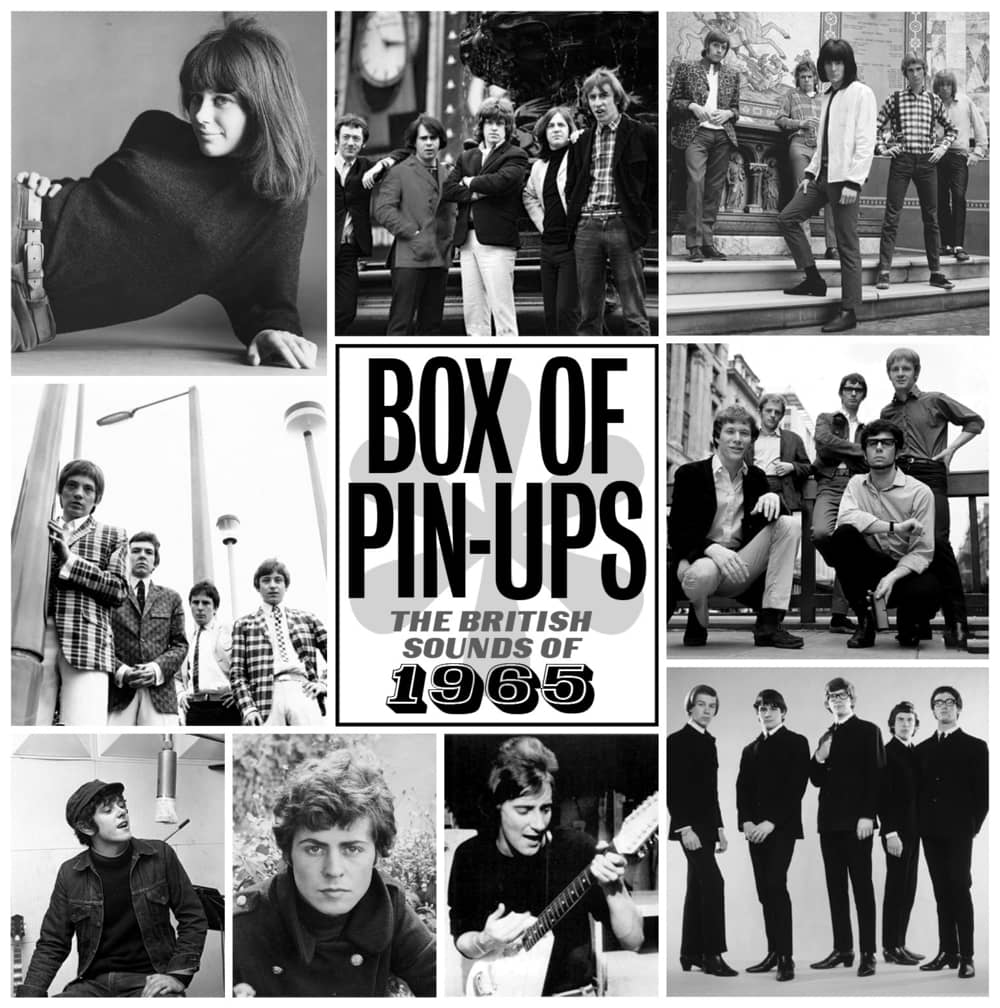 The British Sounds Of 1965, a new 3CD set with tracks from The Pretty Things, Manfred Mann, The Yardbirds and The Kinks, plus many others. This collection acts as a prequel to A Slight Disturbance Of The Mind, which looked at UK pop in 1966. Ian Canty changes the pictures of his wall…

Having stated in the recent Think I’m Going Weird review (which you can read here) that 1966 was a hugely important year in UK music, along comes Box Of Pin-Ups. This new 3CD set which puts forward a case for 1965 perhaps being of equal merit, offering a bright array of different sounds. Merseybeat, which had been the driving force in the UK for the early part of the 1960s, was more or less over and done at this stage, with The Beatles having moved well away from their roots by the time of Rubber Soul, their second album of 1965. This left a great number of acts who needed to piece together a new attitude in order to survive.

In addition rhythm & blues rave-ups had become a powerful force on the live circuit and US soul had also made a big impact. The mods, who with speed-fuelled energy filled the all-night clubs, also wanted edgy bands that reflected their fast moving lifestyle of ever-changing sharp fashions, scooters, pep pills and violence. Up and down the country fledgling outfits modified their approach by the day, as falling “behind the time” was tantamount to resigning oneself to the dreaded cabaret circuit. Even some pretty middle of the road pop music had give some ground to the now sound if they wanted to cut it in the wilder mid-60s. All this activity ended up instigating some exciting times and a selection of it is captured on this new collection.

As far as starting things with a bang goes, Box Of Pin-ups opening salvo of The Pretty Things’ Midnight To Six Man, an alternate take of What’cha Gonna Do About It by The Small Faces and The Eyes’ snotty majesty on I’m Rowed Out is hard to beat. The Pretties and The Faces of occupied positions as premier r&b punk hoodlums and mod fashion plates respectively, something that is borne out by Midnight To Six, one of the great moments of rock & roll attitude and the sawing pop art feedback antics on a wild take of What’cha Gonna Do About It. The Pretties also crop up later on disc three with an exuberant Get A Buzz. Ealing’s own The Eyes were also important in their own way, perfecting a sound that would be retrospectively termed freakbeat on I’m Rowed Out.

Donovan’s work tends to polarise attitudes, but his Hey Gyp (Dig The Slowness) surely must have influenced a young Marc Bolan and Lulu & The Luvvers’ sparky soul number Surprise Surprise follows on with a bundle of youth vim. Belfast band The Wheels’ rough and ready version of garage standard Gloria speeds gloriously towards its dénouement and beat veterans Brian Poole & The Tremeloes attempt to jump into the future in similar style with their take on The Strangeloves’ I Want Candy. The Poets, from Glasgow, furnish us with a genuine cool 1965 classic in That’s The Way It’s Got To Be, with the dramatic and energetic Unto Us by The New Breed, a Hampstead group previously know as Thee (featured on disc two of this set with the poppy There You Go!), also impressing. Then a young Ron Wood pilots The Birds to freak heaven on a mean and moody Next In Line, full of chilled guitar brutality and fluid drums.

Paul Jones was near the end of his stint in Manfred Mann by EP track Tired Of Trying, Bored Of Lying, Scared Of Dying, but this is a tough and enjoyable slice of blues with a nice rolling piano sound and great guitar fuzz. Dave Berry weaves a more measured web on an alluring This Strange Effect, written by The Kinks’ Ray Davies and there are early sightings of Elton John and Rod Stewart. The former features in recognisable vocal fashion on Bluesology’s soul-flecked Come Back Baby and Rod on a solo Why Does It Go On. Brian Auger had previous with Rod The Mod and his Trinity and their Fool Killer positively reek (in a good way) of exciting and hot dance all-nighters.

Vashti (Bunyan) is now better-known for Just Another Diamond Day, but Some Things Just Stick In Your Mind is ice-cool folk pop and The Searches jangle as only they knew how on I’ll Be Doggone. It is a shame that not long after this they were left behind by the changing times, despite their obvious performing talents. A busy r&b number called Done Me Wrong by The Couriers is enjoyably frantic and mod band The Frays contribute a punchy Keep Me Covered, with their singer eventually going on to front Canadian new wave band Battered Wives. The punky lurch of Glenn Athens & The Trojans’ Let Me Show You How is a real bolt of pure 1960s sneering attitude, it is an absolute gem. This disc concludes with the crunchy rave-up of I’m Leaving by The Mark Four, who would soon mutate into The Creation and The Syndicats’ much heard but still fab Crawdaddy Simone.

Disc two Of Box Of Pin-Ups begins with the garagey rumble of The Yardbirds Evil Hearted You and Coventry freakbeat kingpins The Sorrows with No No No. Mod heroes The Action bring Land Of One Thousand Dances vividly to life and I Can’t Get Any Joy by Rolling Stones proteges The End packs a neat pop punch. The Hollies often showed they had all the tools to be major players, when they finally managed to assert themselves as self-contained unit not dependent on outside writers. Their Put Yourself In My Place is the kind of beat pop nugget The Beatles had specialised in, but has a charm and gusto of its own.

The Afex hailed from Dagenham, but were sadly not due any real success with only a couple of singles by them emerged. However their freewheeling, youthful-sounding Too Many Things is a tonne of fun and the echo-laden with slightly surf drums You Got What I Want by Boys Blue is chaotic enough to start a riot of its own. Having checked in with Ron Wood on disc one, brother Art’s band The Artwoods strut into view here with the cool r&b of She Knows What To Do. The Graham Bond Organisation follow in a similar mode with Neighbour Neighbour and while it is very tempting to mention a certain contemporary garage rocker when talking about The Downliners Sect, I won’t and will just say their Leader Of The Sect is simply enjoyable silliness of the first order.

I’m a big fan of Zoot Money’s Big Roll Band and brassy, live feel of I’ll Go Crazy is the perfect fit for the keyboard Lord of Looning. Harrow’s Bo Street Runners had a brush with success when they won a Ready Steady Go TV competition to find the new Beatles. With that weight on their shoulders they didn’t have much chance, but their Get Out Of My Way is a decent and fast tune with a marked soul influence. Having mentioned Marc Bolan earlier, the bopping elf is present on this disc with the 1965 single version of The Wizard, which shuffles along enigmatically and even though The Uprooted were in truth an amateur school band, they sound pretty cool and sharp on It’s Just You.

Diamond Girl by The Kingpins is a real powder-keg of 60s punk excitement and The Ugly’s were an early vehicle for Brum rock & roll legend Steve Gibbons. They are represented here by It’s Alright, a proto-psych pop breeze. A fast version of the Chuck Berry standard Don’t Lie To Me by Four + One featured one Keith Hopkins aka Keith West and it’s fun to hear The Moody Blues in pure soul mode on And My Baby’s Gone. The bluesy beat of Reelin’ And Rockin’ by The In-sect seems slightly anachronistic but is still quite good and There You Go by Thee finishes off this section of Box Of Pin-Ups.

The third and final part of this set ensues with The Animals’ tough as nuts It’s My Life – if you wanted the hard-boiled North East attitude in one addictive musical hit, here it is. The ultra fuzz of Jump And Dance by The Carnaby has been often compiled, but in order to give as clear a picture of 1965 as possible I suppose a few familiar items have to be included. An excellent Bring It To Jerome, a Joe Meek production by David John & The Mood, acts here as the perfect prelude to The Pretty Things’ fine Get The Buzz. Breakneck r&b is also the order of the day on The Primitives’ You Said.

A more ornate pop approach is displayed on Robb Storme & The Whispers’ Where Is My Girl and John Bryant’s gleaming sound Tell Me What You See. But of course St Albans’ favourite sons The Zombies were masters at that game and their piece included on Box Of Pin-Ups Tell Her No is as smooth a slice of mid-60s pop that one could imagine. Of course The Hollies were no slouches in that particular field either. Their second contribution I’ve Got A Way Of My Own is a real charmer of rough harp blowing and harmony vocals and James Royal & The Hawks’ Doug Sahm cover She’s About A Mover follows with a solid dance groove.

The moody, sorrowful blues of I Found Out by The Cops ‘N’ Robbers overflows with lowkey menace and Leatherhead combo The Silence, soon to become psychedelic act John’s Children, inject the lo-fi sound of Forgive Me If I’m Wrong with a churning but agreeable fuzz. A rough audio quality also marks Arthur Brown with The Diamonds’ You Don’t Know, but even so it underlines Art’s prowess as a soul shouter. The Sheffields’ Plenty Of Love is lively and explosive and we find ourselves back firmly in rhythm & blues rave-up country with The Betterdays’ hard driving Honey What’s Wrong and the organ glide of Stupidity by Guy Darrell. This set reaches its finale with The Kinks’ peerless Where Have All The Good Times Gone, which is a hell of an evocative way to go out on.

Box Of Pin-Ups is, for the vast majority of its running time at least, an invigorating and entrancing listen which reflects the rapidly changing times it documents. This set comes with the usual very thorough sleeve notes that give you the full S.P. on each of the acts famous or obscure and the whole thing is pretty well packaged. 1965 seemed to me to mark the end of beat and the beginning of something new in UK music – a voyage of adventure was ahead and among the 92 tracks here you can hear the storm approaching. But even at this stage of development, there is much to delight.