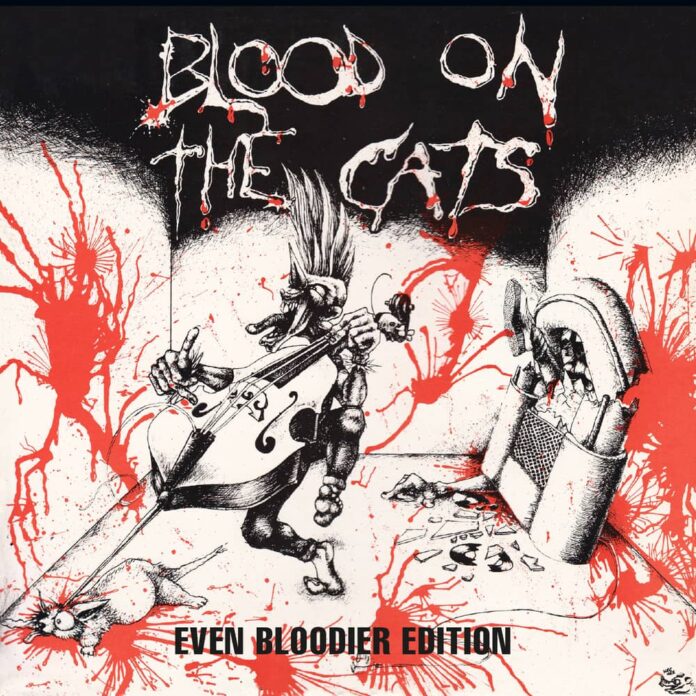 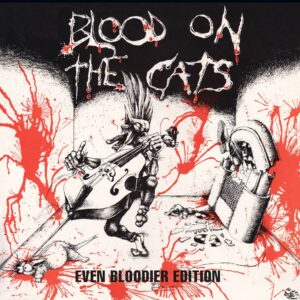 A welcome reissue of the 1983 Anagram Records compilation Blood On The Cats, now expanded and retitled as the Even Bloodier Edition to include a total of 56 tracks spread across 2 CD’s housed in a neat fold out digipack with a 20pg booklet written by Craig Brackenridge (author of Hell’s Bent On Rockin: A History of Psychobilly – out of print, but well worth finding) that features original release artwork and a selection of gig posters from the era including many from the Klub Foot venue which evolved to become the epicentre for UK rockabilly/psychobilly, and itself spawning a series of vital album recordings.

As punk splintered into post-punk, new romantics, and UK82, one scene, despite the gravity-defying quiffs looked to remain in the underground. Taking their cue from the spark of punk whilst casting an ear back to the 50’s but with up-to-date trans-Atlantic inspiration from the likes of The Cramps, the UK offered up bands like Alien Sex Fiend, The Guana Batz, and The Meteors, all of which were very different yet somehow gathered under the psychobilly banner.

The original Cats album is included in full and features Alien Sex Fiend’s Wild Women which originally came out on their Youth (Killing Joke) produced Who’s Been Sleeping In My Brain? album; Alien Sex Fiend were one of those bands that seemed to straddle both the emerging psychobilly and proto-goth scenes, their debut gig was in December 1982 at the now legendary Batcave club, yet their sound had clear roots in late 50’s rock & roll mire; Wild Women has elements of both these genres, a dirty fuzzed up rockabilly rhythm but with blood curdling vocal chants. Sunglasses After Dark, taking their name from a Cramps track were firmly in the psychobilly genre, though Swamp Baby has elements of primitive garage rock & roll in the mix; good to hear Fats Terminal from Bone Orchard once again, one of only a handful of bands from the early psychobilly scene to have a female lead singer.

The Guana Batz burst out of Feltham in 1983 complete with full sleeve tatts, a solid slap bass, dodgy shorts, Pip Dog and some of the most accomplished tracks of the era. Cannibal Run is a prime example complete with incendiary yelped vocals, guitar riffs to peel your face and a drum beat that ignited the wreckin pits. Likewise The Meteors here in their first incarnation with Graveyard Stomp, which was the flip to their 1981 Radioactive Kid single. Founder P. Paul Fenech seems to divide with his “only the Meteors are pure psychobilly” claim – that said they knew how to get a dancefloor moving! Screaming Lord Sutch was a great British eccentric, a novelty act, though he did get to support The Cramps and The Meteors with whom he released a split 12” in 1981, listening to Murder In The Graveyard you cannot deny that he was influential, particularly in terms of lyrical content.

The Sting-Rays exemplify just how diverse the scene was, they looked like rockabillies, frontman Bal’s quiff was an artwork in itself, they had a punk attitude, yet their sound was pure 60’s trash, here with the revved up Dinosaurs that was originally released on the legendary Big Beat label. I was always unsure whether The Outcasts were the same Outcasts who put out Self Conscious Over You on Good Vibrations back in 1979, turns out they were one and the same, but had toured with The Meteors whose influence had certainly rubbed off! Seven Deadly Sins is an accomplished, brooding rockabilly number that is hard to equate was the work of the same band. 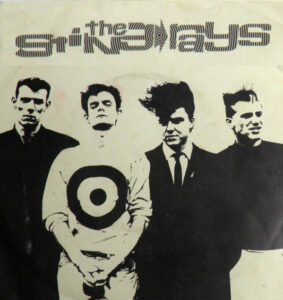 Panther Burns rounded of the Cats album with their version of Sonny Burgess classic Red Headed Woman. Fronted by Tav Falco, hailing from Memphis and having included Alex Chilton should have assured Panther Burns greater success, however their indefinable mix of obscure blues, country, and traditional folk music colliding with rock suggested them more of an art-house project, that said their contribution to Cats is as raw and visceral as you are likely to find anywhere.

Disc One is expanded to include The Revillos who contribute the magnificent Voodoo, lifted from their late 1980 Rev Up debut album, other worthy inclusions come from the wonderful Inca Babies who offer up The Interior, their self-released debut single, which twists and contorts on the back of a sinuous guitar riff, whilst The Cannibals threaten to demolish your speakers with the appropriately titled Paralytic Confusion – a distortion fuelled masterclass. Both The Rattlers and Restless played pure rockabilly, yet with enough energy to keep the psychobilly crowds entertained, similarly Deltas who released Heart Attack as their debut in 1980 – to be fair to them they had been spreading the rockabilly twang long before the psychobilly scene emerged. Buzz & The Flyers are probably most noteworthy for having future Joboxers vocalist Dig Wayne in their line-up.

Disc Two looks further afield and includes The Cramps masterpiece Goo Goo Muck and the vital Preaching The Blues from The Gun Club, neither band could be termed rockabilly, and definitely not psychobilly, but you can not deny their over arching influence on the genres. Worth the album purchase price is the inclusion of Grant And The Geezers Monster Stomp, an ultra-rare self-release from this Tempe, Arizona outfit in 1982, at the other end of the scale is Destination Zululand which took King Kurt onto national TV screens via Top Of The Pops and arguably introduced psychobilly to the masses. The Sid Presley Experience also made it onto national TV courtesy of The Tube, here with Public Enemy Number One before subsequently morphing into The Godfathers. Morphing in the other direction were The Damned who for a one album project became Naz Nomad And The Nightmares covering 60’s garage classic, here taking on She Lied which had originally been performed by The Rockin’ Ramrods. The Bananamen were another band in disguise; this time it was The Sting-Rays doing extra hours as they covered The Trashmen’s Surfin’ Bird which somehow, they manage to make their own! The Milkshakes gifted us Comanche whilst their girlfriends under the guise of The Delmonas bastardised Peter Gunn and The Locomotion into… Peter Gunn Locomation.

Having left The Meteors Mark Robertson and Nigel Lewis initially formed The Escalators then became The Tall Boys who released the wonderfully titled Wednesday Adam’s Boyfriend mini-album which included Feel It, itself a cover of an obscure garage track from Canadian band It’s All Meat, the track is notable for is reliance upon an organ to power the rhythm, the organ was played by Jamie Taylor guesting from The Prisoners who are also here with the 60’s kaleidoscopic whirl Revenge Of The Cybermen. The X-Men remain personal favourites from this entire scene, those early Creation Records singles, each housed in a fold over sleeve and rammed into a poly bag – Do The Ghost being a prime example of their garage sourced psychobilly. 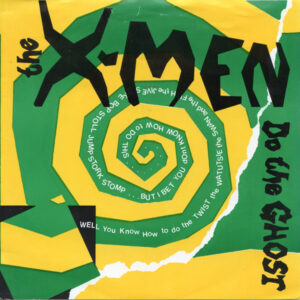 The Raymen showed that psychobilly was not just confined to Hammersmith!! They came piling out of Berlin, offering up tracks like Man From Mars (what you get here is the original cassette only version) which rocks with the best of them, other European contributions come from Sweden’s Voodoo Dolls. The Meteors are the only band to be included twice, second track I’m Just A Dog saw then reaching the Indie Chart Top 5 back in 1984 with this perfect snapshot of the band at their inflammatory best.

This Even Bloodier Edition is a well thought out compilation that not only captures the roots of the psychobilly scene but also shines a light into some of its darker recesses, there is enough here to satisfy those already familiar, and equally to attract those with a passing interest.

Whilst this compilation is a historical reference, many of the bands featured are still going strong to this day; Guana Batz released the excellent Back To The Jungle album in 2018 and are touring the UK and Europe later this year. Alien Sex Fiend continue their musical journey, the most recent album Possessed taking them in an electro direction, whilst The Meteors continue to tour the world and released Dreamin’ Up A Nightmare in 2021. King Kurt continue to tour, Inca Babies reformed in 2007 and have most recently released the album Swamp Street Soul (and are playing in Manchester in March 2022) – the scene is as healthy as ever, you just need to look for it!