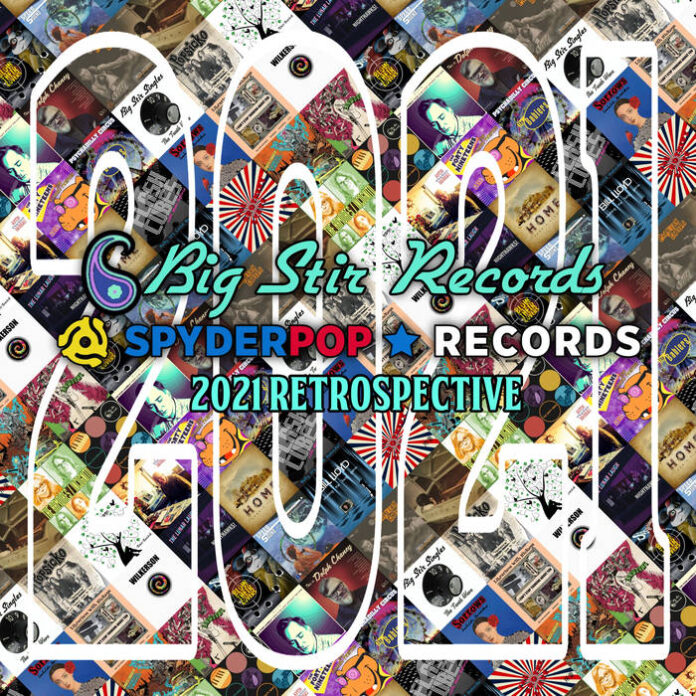 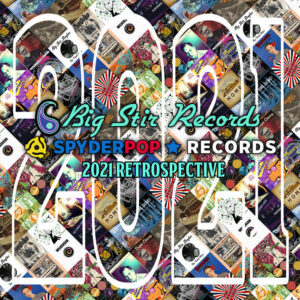 New 24 track sampler album drawn from the 2021 releases on the Big Stir and Spyderpop labels. Among the artists featured are The Stan Laurels, Anton Barbeau and The Brothers Steve. Ian Canty casts an eye back over the last twelve months…

Though 2021 has been another strange and pretty hard year for a lot of people, Big Stir and their alliance with Spyderpop Records went from strength to strength. From excellent new albums from The Brothers Steve, The Speed Of Sound, Bill Lloyd and The Forty Nineteens, to Sorrows’ epic reimaging of their 1980 album Love Too Late as Love Too Late…The Real Album, to fine reissues like the ones from Chris Church, the label has been a virtual conveyor belt of quality. The fact there has been much expansion of Big Stir/Spyderpop’s activities has not been the expense of their core values. They have still sought out bands and singers with a pleasing knack for playing killer tunes and also that are able to apply both power and delicacy when the need arises.

Though I was a little sad that the very successful and highly listenable Wave compilations, drawn from the Big Stir Digital Singles Series, concluded this year. However this 2021 Retrospective gives the listener a chance to again indulge in the Big Stir/Spyderpop’s verve where various artists collections are concerned. Many of the folk featured, for instance Bill Lloyd, Dolph Chaney and The Armoires, I have written about at length when reviewing their albums (see here, here and here), but there is also room for bands and singers who have contributed in other ways over the past twelve months.

We get off to a flyer with on the Big Stir/Spyderpop 2021 Retrospective with the melodic power of The Stan Laurels’ Tomorrow, from their excellent LP There Is No Light Without Dark. Then Dolph Chaney follows with a truly rockin’ I Wanted You. Detroit quartet Popular Creeps’ Split Decision comes next, a raucous jangle pop/rock ace, was issued on single by Big Stir. It’s a little like a very poppy Dinosaur Jr and made me want to find out more about them at the first available opportunity.

Learn by Chris Church takes in country rock via The Clash’s Rudie Can’t Fail and near the end of this set he also appears with the guitar-heavy beaut Left In the Summer. The Big Stir label’s head honchos The Armoires dip into their fine Incognito collection for the beguiling haze of Great Distance, ably demonstrating that as well as being the keen ears behind the scene, they also can come up with sparkling pop themselves seemingly at will.

Really capturing the spirit of those sunny days when you’ve got to get and do things before it’s too late and winter creeps up on you, It Must Be Summer by Irene Pena should really have been blaring out of radios all over the country. There’s still time though and The Forty Nineteens’ It’s For Fun (That’s All We’re Living For), from the album New Roaring Twenties (reviewed here) is red-hot, exciting and a full hundredweight ball of pent up energy.

The title track from The Bablers’ Psychadilly Circus (the LP is reviewed here) is a canny measure of lysergic pop for modern times and the sinuous strangeness of Funhouse by The Incurables was one of the highlights of The Tenth Wave comp. Santa Barbara’s Popsicko blazed a trail for the kind of music Big Stir/Spyderpop specialise in during the 1990s. They are represented by the runaway mayhem of Nastassja, which show a band with so much potential. Steve Stoeckel’s gentle Birds comes along in its wake and the compilers’ judgement is spot on here – the lightness and intricate touch displayed by Steve is just the ticket after Popsicko’s “difficult to follow” breath-taking rock & roll mayhem.

I’ve waxed lyrical about Anton Barbeau’s capability as a psych pop wonder and suffice to say his One Of Her Superpowers is entrancing and engaging. The Flashcubes, with a history going right back to 1977 and a place at the head of the table as far as powerful pop music is concerned, team up with Pezband’s Mimi Betinis for their feisty cover of Baby It’s Cold Outside and Sorrows, of a similar vintage, show up with a poised then explosive Christabelle, from their quite brilliant Love To Late…The Real Album (reviewed here).

I Can’t Stop Thinking About You by Librarians With Hickeys balances tuneful voice and sparky guitars very well and Danny Wilkerson’s You Still Owe Me A Kiss comes over as an easy going delight. Manchester’s The Speed Of Sound were the one of the discoveries of the year for me (despite them being around for ages – I’ll admit muggins here isn’t always that quick on the uptake) and the fabulous punky drift of Tomorrows World is from the gem on an album Museum Of Tomorrow (you probably know what’s coming by now, full review here).

The acoustic-driven sweep of Aquarius by The Brothers Steve comes next and is also extracted from a fine collection Dose (yep that is reviewed here), but unfortunately Nick Frater’s Earworms collection arrived just too late for the Louder Than War end of year poll (yes you can read the LP review here). If it had come a month or so earlier, I would have expected to see it worrying those at the top end of that chart and It’s All Rumours, the first song on that disc, is an out and out stormer. Finishing off the set with real style we have Robyn Hitchcock’s Queen Of the Eyes, restyled by Canterbury’s Spygenius on Blow Their Covers (for the last time – it’s here).

This really is an excellent selection box with which to end the year. It could act as an ideal starting point to catch up with 2021 as a year in pop music away from the overly packaged and mass produced mainstream, or the perfect entry point to start exploring the Big Stir/Spyderpop archive in earnest. But setting that all to one side, the Big Stir/Spyderpop 2021 Retrospective is just simply damn fine listening from beginning to end. This is non-stop fun, packed with great tunes and as good a collection of 2021’s musical highs as one could hope for.