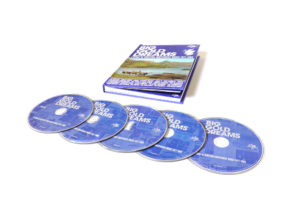 With a population of just 5.3 million, its fair to state that musically Scotland punches way above its weight; it’s been the birthplace of acts such as The Sensational Alex Harvey Band, Primal Scream, and Mogwai through to world dominating pop courtesy of The Bay City Rollers, Texas and Wet Wet Wet. This lavish 5CD boxset however focuses on the independent scene between 1977-1989, the period that punk ignited, and the myriad of genres that followed.

Taking its title from the Fire Engines’ memorable single and Grant McPhee’s recent TV and DVD documentary, Big Gold Dreams includes many of the scene’s most important names as well as countless obscurities that were released via the key labels of the period including Zoom, Postcard, 53rd & 3rd, Rational, Fast Product/Pop:Aural (the label that inspired Tony Wilson to set up Factory), Supreme International Editions, Creation, Egg, and Sarah. To highlight the efforts of these labels and the people at their helm there is a glossy 70pg booklet complete with lengthy essays and band histories by Grant McPhee, Neil Cooper and Tim Barr, as well as original release artwork, and dozens of reproduced gig posters. 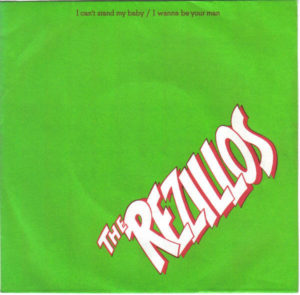 The entire release is presented in chronological fashion, opening with The Rezillos ‘I Can’t Stand My Baby’ (Sensible Records) which was the first independently released single in Scotland, beating (included here) The Valves ‘Robot Love’ (Zoom Records ) by just a couple of days; The Rezillos had both a distinctive energetic sound, and equally eye-catching look that drew on the bands art school collision with punk; it clearly worked as on the back of their debut they were signed to Sire and whisked off to the USA to record their debut album.

Following The Valves Zoom debut the label released ‘Put You In The Picture by P.V.C.2 in October 1977, a Stranglers inspired chugger that was dreamt up by three members of teeny-bop chancers Silk who boasted Midge Ure amongst their number, the track was later re-recorded by The Rich Kids after Glen Matlock had recruited Ure; Silk also included Kenny Hislop later of Simple Minds who at this point, November 1977 were going under the moniker Johnny & The Self Abusers whose sole release ‘Dead Vandals’ was picked up by Chiswick Records, the track retains a primitive charm, its propelled by a buzz saw guitar entirely devoid from any future Simple Minds releases.

Another band to be picked up by a London label were Subs whose sole release ‘Gimme Your Heart’ came out courtesy of Stiff Records, its all drum driven, in fact it sounds like someone has nicked Rat Scabies ‘New Rose’ drum motif; Subs included amongst their ranks Derek Forbes who later joined Simply Minds, and Spear Of Destiny, more recently he released material as ZANTi with Marc Almond/ Nick Cave collaborator Annie Hogan. 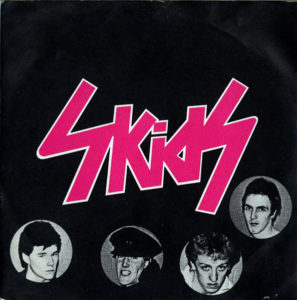 The Skids ‘Reasons’ (No Bad) came out in April 1978, and is some distance from their subsequent releases, however the seeds are visible, Jobson’s distinct vocal delivery and an early solo from Stuart Adamson make this a worthy discovery, sadly that can’t be said for The Zips ‘Take me Down’ which is more power-pop, and hasn’t weathered well over the years… prior to The Waterboys Mike Scott formed Another Pretty Face whose debut ‘All The Boys Love Carrie’ (New Pleasures) is included, upon release it was awarded NME Single Of The Week which is perhaps too high a plaudit but it does retain an energetic charm.

Its unlikely anyone is unfamiliar with Simple Minds ‘Chelsea Girl’ which came out via Zoom in June 1979, inspired by Nico the track effortlessly displays the aims of the former Self Abusers, its bold, with ambitions which sadly later morphed into the world conquering pompous ‘Sparkle In The Rain’.

The Freeze counted Gordon Sharp, and David Clancy (later Cindytalk) amongst their ranks, their debut ‘Paranoia’ is a fairly standard early punk knockabout, though it does have a darker edge, personally I preferred the 1980 follow up ‘Celebration’ a tribute to the actress Louise Brooks which was built around brooding keyboards and a nagging guitar riff… Flowers ‘Confessions’ (Pop Aural) is an important release, it snuggles up to the Raincoats, Au Pairs, and arguably The Slits, it’s all scratchy and played with limited ability, however the vocals are provided by Hilary Morrison who with Bob Last created Fast Product, perhaps one of the first labels to pitch themselves as a multi-media outlet rather than be confined to just releasing records. 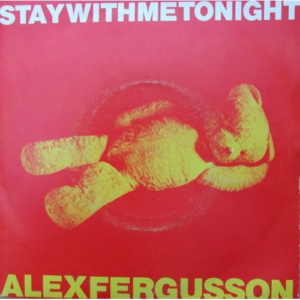 Equally important is Alex Fergusson who released ‘Stay With Me Tonight’ in November 1980; a primitive synth-pop gem that rivals early OMD etc; Fergusson would go on to create Sniffing Glue fanzine,  he also formed Alternative TV, as well as later joining Psychic TV, whilst the tracks producer Larry Least eventually revealed himself as Daniel Miller who went on to found Mute Records.

Disc Two includes Altered Images ‘Dead Pop Stars’ a brooding piece that is akin to The Banshees, no doubt courtesy of the Steve Severin production that is a very long way from the later pop of ‘Don’t Talk to Me About Love’.

35mm Dreams took their name from a Lou Reed song, releasing their debut ‘More Than This’ in November 1980, the track leans heavily on The Fire Engines but (sadly) without the off-kilter edge; similarly Scars ‘All About You’ – this was the bands third release on the Pre label, itself an offshoot of Charisma, and lacks the bite of earlier masterpieces like ‘Horrowshow’, that said hearing it again after nearly forty years its fresh, and could just as easily have been released last week.

Fire Engines ‘Big Gold Dream’ whilst naming this release is also a worthy inclusion, its not as downright difficult as ‘Candyskin’ instead taking on a more pop edge to their No Wave DNA, a clear lead to where Davey Henderson would go with his next project Win, whilst Boots For Dancing ‘Ooh Bop Sh’Bam’ was all angular in a similar fashion to Josef K included here with ‘Sorry For Laughing’ via Belgian boutique label Les Disques du Crepescule who also released ex Josef K vocalist Paul Haig’s ‘Running Away’ a unique Sly and the Family Stone cover. 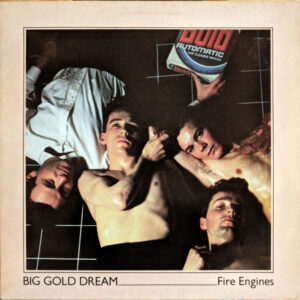 Disc Three includes some heavyweights, none more so than Cocteau Twins ‘Feathers Oar-Blades’ which is lifted from their ‘Lullabies’ debut in late 1982 and clearly demonstrates the altogether other worldliness that would go on to see them conquer the globe; another figure set to conquer the world was Alan McGee who is included numerous times within this release, tracks from Laughing Apple, Biff Bang Pow!, and The Revolving Paint Dream all with a 60’s acid tinged vibe and clear markers for what would evolve into Creation Records.

The appallingly named The Wee Cherubs are included courtesy of their sole release ‘Dreaming’ which appeared in September 1984 and is essentially the sound of Postcard Records, albeit on the wrong label. 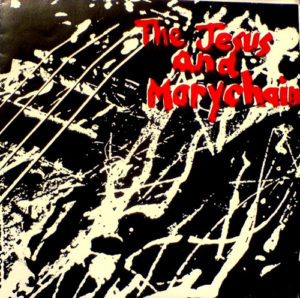 Nestled in the middle of Disc Three is I suggest one of the most vital records ever to have been released, the savage majesty of The Jesus & Mary Chain ‘Upside Down’, a visceral screeching assault on the senses that to this day has lost none of its gut-wrenching beauty.

Disc Four opens with ex JAMC drummer Bobby Gillespie making his vocal debut on Primal Scream ‘All Fall Down’, its all 60’s whimsy and offers no clues to how this band kicked off the indie-dance revolution with ‘Loaded’ some years later… whilst Gillespie was fronting Primal Scream his previous band mates William and Jim Reid produced the excellent debut single ‘Don’t Slip Up’ from Meat Whiplash who took their name from a Fire Engines B-side, its all deep in the mix guitar distortion, deadpan vocals which later transferred to the Motorcycle Boy when they drafted in former Shop Assistant vocalist Alex Taylor who contribute ‘Room At The Top’ to this set, ‘Room At The Top’ being the B-side to ‘Big Rock Candy Mountain’ single which was released on Rough Trade.

The Shop Assistants are included with ‘Somewhere In China’ lifted from their magnificent self-titled album which was released in late 1986, it’s all shimmering guitars, hushed vocals and insanely catchy melodies, likewise The Fizzbombs ‘Sign On The Line’ which just sounds like The Shop Assistants covering ‘Upside Down’ and is genuinely fantastic for it, think of The Flatmates and perhaps Talulah Gosh and your there, it’s a rare release coming out on the Narodnik label back in 1986, a decent copy of which will set you back at least £20 these days.

Goodbye Mr. Mackenzie included amongst their number Big John Duncan of The Exploited and Shirley Manson who later joined Garbage, their track ‘The Rattler’ is a slice of infectious clever pop, as is The Beat Poets instrumental ‘Killer Bee Honey’ which came out on 53rd & 3rd and is possibly the only Scottish surf track I have heard to date!

Disc Five includes a pre-acid days Shamen with ‘Happy Days’, and Baby Lemonade who continued in the fizzy thrash pop of The Shop Assistants et al, ‘Jiffy Neckwear Creation’ being produced by ex-JAMC bassist Douglas Hart and released on a flexi-disc by the Sha La La label who were also responsible for The Clouds ‘Jenny Nowhere’ a sub 2 minute garage tinged thrash.

This frankly incestuous vibe is evident throughout this entire compilation, the same names continually popping up, involved in yet another guise; Rote Kapelle who took their name from the German translation for Red Orchestra, the name given by the Gestapo to anti-Nazi resistance workers during World War II are another example and include various Shop Assistants and Fizzbombs amongst their ranks, this their second single coming out via Marc Riley’s InTape label.

The Vaselines might be better known for being Kurt Cobain’s favourite band, but its clear Cobain had taste; the band are often written off as twee pop, and that’s a mistake, for ‘Teenage Superstars’ is aggressive and shambolic in equal measure, squalling guitars, crashing drums. I suggest The Vultures might have had a few Vaselines releases in their collection, included here with ‘Good Thing’ which also came out on the Narodnik label, angular post-punk girly pop that really should have been rewarded with more than this solitary release.

The Dog Faced Hermans initially crawled out of the anarcho-punk scene, best described as creating an obtuse sound, filling their songs with jazz trumpets, ambient noise and just general unorthodox patterns, ‘Miss O’Grady’ was released on journalist Everett True’s Calculus label in 1989, listening back now its no surprise to discover that the band subsequently moved to Amsterdam work alongside The Ex, the track works as the perfect introduction for the unique charms of Strethcheads ‘Groin Death’ (Pathological Records) a car crash of death to trad rock and US hardcore sensibilities that screeches and explodes across its 77 second abandonment of melody.

Big Gold Dreams is a lavishly presented and all encompassing set that both shines a light, and documents a crucial period within the Scottish music scene; the compilers have been brave in their choices coupling the bands that will help sell this collection alongside others who barely made it out of their bedroom recording studio, as such it its a vital addition to any collection.