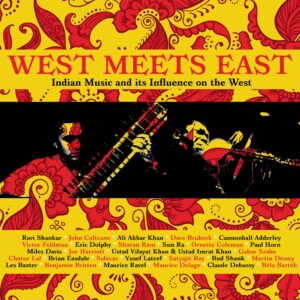 Subtitled “Indian Music and its influence on the West” this 3CD set looks at the Eastern influence on popular music in the years before the Beatles, with big names from jazz, classical and exotica pitching in…..LTW’s Ian Canty takes a ‘trane ride to the East side….

With the advent of psychedelia in the late 1960s the Indian influence on western pop music was at its zenith. The Beatles and in particular George Harrison played a key part in this development. Harrison’s use of the sitar on John Lennon’s Tomorrow Never Knows, included on their ground-breaking 1966 album Revolver, would prove to be the opening of the floodgates. If many of the subsequent psychedelic wave cottoned on to Eastern mysticism, sitars and tablas in more or less the same way as they began sporting Granny Takes A Trip clobber, the influence ran deep for others. Before long drones and blissed-out ragas were the background to many hip recordings as Eastern sounds made their presence felt. Things would never really be quite the same again.

But if we step back a decade to the 1950s, a great many of jazz’s main talents had caught an earlier wave of sound from the east. It’s no real surprise that modern jazzers of the 1950s picked up on the work of the likes of the legendary Ravi Shankar, who provides the lengthy and meditative opener to this set Sindhi Bhairavi (Morning Raga). Their floating, experimental jazz jive was almost a mirror image of the varying changes of pace and sense of tensing up and eventual release that characterised a great many Indian musical works of the time and more pertinently here, Ravi’s Morning Raga.

This collection has been carefully put together by él to follow the development of acceptance and influence of Indian music from the early 20th century to the dawn of rock & roll, featuring the sources of inspiration as well as the newer adherents. However, there isn’t always that much that binds an individual track to the theme. For example something like John Coltrane’s riffing on the theme of My Favourite Things doesn’t exactly sound radical now or that eastern in intent, as cool as it is. In fairness though his long improvisation India (also recorded and later used as a live show-stopper by Mods heroes The Action) is far more in the required mode, with his squawking sax attempting to mimic the transcendental vibe of the sitar.

The finger-clicking cool of Dave Brubeck’s Calcutta Blues really swings and Ali Akbar Khan gives us the ultimate laidback sarod and tabla combo of Teen Tala. Cannonball Adderley’s Quintet Plus spotlight a neat rolling piano on New Delhi, before the same title is utilised by the final piece on this disc, this time by the Victor Feldman Quartet. On their track the flute takes the lead and brushes are applied to drums to pleasant effect.

Disc two of West Meets East has a similar mix of jazz/raga crossovers plus some examples of the inspiring and authentic Indian music thrown in too. Given the fact the planet earth couldn’t contain him it isn’t exactly a shock that Sun Ra gets in on the act here with his cut India, with swishing cymbals, prominent trumpet and a melody picked out on his trusty electric piano. Sharan Rani was very important figure in Indian music, being a key scholar of and pioneering female use of the sarod, a kind of ancient Indian lute. Rani had became besotted with the sarod during her childhood, eventually writing a history of the instrument “The Divine Sarod”. She uses it to hypnotic effect on her piece Darbari Kanada, accompanied by Chatur Lal’s tabla (Lal also features on disc three with the self-explanatory Tabla Solo).

Miles Davis’ Milestones has a “Fantasy Football” brass section playing on it of him, Cannonball Adderley and John Coltrane. This one trips along quite majestically, with Miles’ clipped trumpet providing the ideal counterpoint to the floating saxes of the latter pair. Ornette Coleman and his Quartet impress on the quick rhythmic drama and sax tension of Lonely Woman and the very subtle Miyan ki Malhar by Ustad Vilayat Khan & Ustad Imrat Kahn, which ebbs and flows very nicely, brings this disc to an end.

The final section of this set broadens things out more, with classical, soundtrack, opera and exotica doyens showing their openness to sounds from the east. Whereas the first two disc featured mainly longer pieces, we have 25 tracks here that show the sheer range of India’s musical influence in a wider context. The speedy flamenco guitar of Sabicas is an evocative treat and the sitar solo title music from Jalsaghar (The Music Room), again by Ustad Vilayat Khan, even verges on a Velvet Underground-style tension.

It’s apt that this section of the set concentrates awhile on soundtracks as the movies and Indian music are inextricably linked. Film producer Satyajit Ray, a huge figure in cinema and in Indian culture, provided his own musical themes to his three short films Teen Kanya. Of these for me Mrinmoyee Sad (Samapti – The Conclusion) is the pick, a moving flute piece with bags of atmosphere. Exotica figures Martin Denny and Les Baxter contribute, with the former’s gentle dance charmer Moonlight On The Ganges being lovely.

Benjamin Britten was hugely impressed on a trip to Bombay and Delhi by performances by Ravi Shankar and these elements that impacted on him show up on the compositions The Prince Of The Pagoda and Water Dances (excerpt). French composer Maurice Delage is featured with four opera fragments voiced by soprano Martha Angelici, which again shows the widespread impact music from the east made prior to the rock & roll years.

This disc and the set ends with three piano pieces from the playbooks of Claude Debussy and Bela Bartok. Debussy’s Voiles from Preludes for Piano is expertly rendered by Sviatoslav Richter, with Rudolf Firkusny doing the honours on his relaxed reflection Estampes For Piano. Bartok’s piece, Romanian Folk Dances For The Piano, flows along nicely, with pianist Lili Kraus teases out the playfulness of the composition perfectly.

West Meet East is a fine and very accessible trip back to the dawn of India’s musical influence. As pretty much a beginner where Indian music is concerns, I felt it gave me a good point of entry and flagged up some important people to check out too. It eases you in nicely and demonstrates that you only something to gain and not to fear when a 20 minute long raga looms into view. As you would expect from él, this compilation has been painstakingly put together and sequenced so that each new music experience is introduced in a way that just seems natural. A real eye opener as to the sheer range of influence that Indian music steadily provided through the 20th century and great listening as well for the more adventurous among us.